Sit in the Machine. Two new films and a series of new structures. The first film is derived from a filmed tour, in idealised form, of the Kalmar Volvo factory, shot in the early 1970s. The second film is developed from a short clip of a group of car workers sitting inside a metal machine press. Adjacent to the two films is a 'relaxation area', modelled after the rest areas that were provided for each team at the Kalmar plant. Florbelle (after Sade) par Vincent Romagny is a group show with works by Josef Strau, Fabian Marti, Monica Majoli, Anne Laure Sacriste... 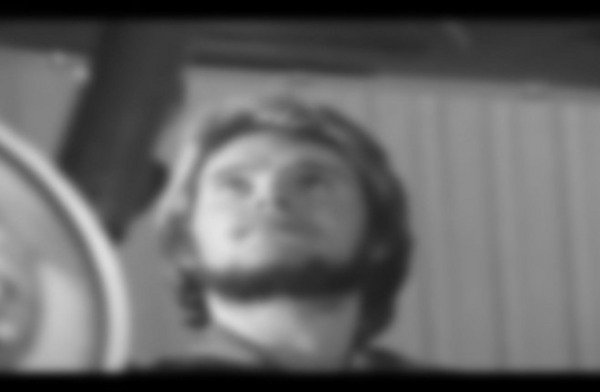 Sit in the Machine

The first, at Air de Paris, comprises two new films and a series of new structures. The first film is derived from a filmed tour, in idealised form, of the Kalmar Volvo factory, shot in the early 1970s. The second film is developed from a short clip of a group of car workers sitting inside a metal machine press, having to bend over each time the press bears down on the metal forms they repetitively place into the mechanism.

In contrast to the idealised vision presented in the Volvo film, the car workers in this case have literally become part of the mechanism of production.

Adjacent to the two films is a “relaxation area”, modelled after the rest areas that were provided for each team at the Kalmar plant. Posters for the two films and the artists ongoing draft text of the book Construction of One, now 45,000 words long, will be located in this area.

Throughout the artwork over the last twenty years, the question of doubling, parallels and apparently unresolvable relationships has been a structural tool deployed as a fractured mirror of questions around production rather than consumption.

“You can see that in my work that there’s a constant dualism, which is between the desire to retain a ghost of a broken structure — to maintain some kind of semi-autonomous art object that can be differentiated from everything else by its ‘art’ quality, and at the same time, to use many of the things that we’ve used, like research, project-based structures and stepping out into documentary methodology to think about questions of production in the broader context.”

Nothing has come down to us of the Marquis de Sade’s last novel, except the title — Les Journées de Florbelle ou La Nature dévoilée (The Days of Florbelle; or, Nature Unveiled) — and jottings he made while rereading the manuscript. Suggestions addressed to himself as if coming from someone else, these Notes pour Les Journées de Florbelle — “Take out, Add, Intensify, Pare down, Remember” — tell us very little about the book’s content. Sade counts his pages, calculates how long it will take him to finish, checks the action against the reappearances of the characters, strives to avoid repetitions, makes lists of places, and so on.

Strictly speaking, he is signalling the operations remaining for the editing of this last novel. The Notes are, structurally, just like his writings: descriptions of operations whose enumeration and narration here precede the effectuation. The missing work is thus transformed into prescription, intention, list: something programmatic and latent, far removed from the subversion it is working towards, even as it makes it possible.

While chronologically later, the Notes have been turned by the loss of the text they annotate into an original work. Clues to Sade’s fantasising in the asylum at Charenton, they themselves become the subject of fantasy, despite their specifically textual aspect. They impose critical distance on us: the emendation of a work has become a work. The Notes that came “after” have been emancipated from all notion of rewriting. Given this, they allow an after.

The exhibition Florbelle (after Sade) is the opportunity to link a choice of works with an equal selection of Notes: prints (Jay Chung & Q Takeki Maeda, Monica Majoli, Fabian Marti, Virginia Overton), a brand new piece (Josef Strau) or a selected work (Pierre Klosowski, Virginia Overton, Anne Laure Sacriste, Benjamin Swaim). While some of these works, though accomplished, retain a preliminary form (Jay Chung & Q Takeki Maeda, Anne Laure Sacriste) or be the sign of the times of their preparation (Fabian Marti, Virginia Overton, Josef Strau), a place remains for the irrational side (Pierre Klossowski, Monica Majoli, Benjamin Swaim) for which they ceaselessly prepare us.