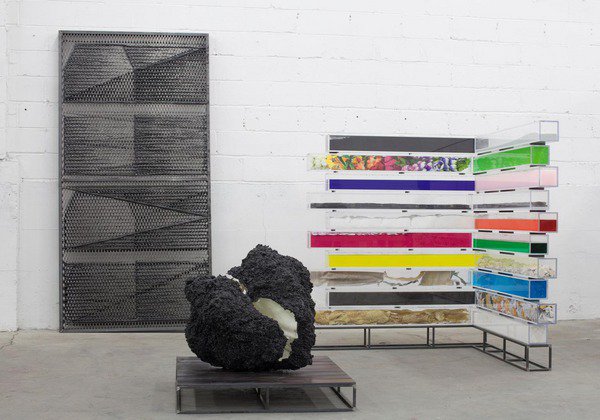 Zilvinas Kempinas experiments with the possibilities of movement in works of art. In his installations, he uses industrial fans to ventilate the air floating one or several loops of magnetic tape that undulates, drawing random forms in space. The videotape is not used for its primary functions (recording sounds and images) but for its actual material properties: its weightlessness and capacity of reflecting light. The tapes are put on show and their movement generates a visual and optic play (parallel lines, columns, loops...) that's rather aleatory or else geometric, depending on the adopted device. These tapes connote a memory, by now illegible, though latent, in fact suspended. It's the memory of recorded sound, a sound now inaudible, but still suggested by the material used.

At the gallery Yvon Lambert, Zilvinas Kempinas presents a range of static pieces, including a large central structure which echoes the architecture of the glass roof. Bands of magnetic tape strung from ceiling to floor create a rhythm, with motionless lines punctuating the space of the gallery. Lucid dream takes us to a metaphoric world which sees our perception of space completely altered, our reflection in the artworks revealing artworks in constant change. While the space gets drawn into the tapes' mirroring effect, the lights reveal a set of lines that form the exhibition's large mural rosette. Equally relevant in these new works is the question of time: tapes taken from VHS cassettes are presented as mummified, like insects in amber and frozen in time. Fixed with resin, yet carrying information, the tapes finally face the paradox of being preserved and destroyed at the same time. With their narrative side completely gone, Zilvinas Kempinas turns them into abstract material that shows itself reflective, mysterious and poetic. A truly physical experience, this significant installation transforms the space completely - some of the works need the viewer to come closer whereas others catch the viewers gaze. Our modified perception of space gets us to a state that deprives us from any points of reference. With this metaphoric idea of a lucid dream, Zilvinas Kempinas plunges the viewer into a new perception of the world, a lucid dream that turns the viewer into the protagonist of a new vision of the real.

Born in Lithuania in 1969 Zilvinas Kempinas lives and works in New York. Flux (2009), is currently on show at the Centre Georges Pompidou as part of its permanent collection until April 2012.

Van Woert!s practice is rooted in the artist!s interest in architecture, ancient history, and nature. Growing up in Reno, Nevada situated the artist between the city!s gaudy, over-accessorized buildings and the raw, unadorned natural landscape of the surrounding desert. The stark contrast between the way elements are made in nature!with the landscape constantly changing through erosion and accretion!and the way they are fabricated in the city provides both figurative and conceptual inspiration for Van Woert.

In college, Van Woert studied architecture, a discipline that greatly influences his work. For the artist, the focus is on the evolution of building materials (from stone to styrofoam), and using that to develop a material language. His architectural interests are diverse, including Vitruvius!s Primitive Hut, the Modernist school!s emphasis on being true to materials and not concealing structural forces, as well as the modified architecture of radical “back- to-nature” groups. Van Woert even borrows material recipes from these ecoterrorists, using elements such as polyurethane, packing peanuts, steel, fiberglass, as well as hair gel and chlorine (which when mixed can become destructive).

In the majority of his work, Nick van Woert confronts the neo-classical esthetics to the ultra-contemporary material that he employs. His use of antique busts, for example, reassesses the codes of classical sculpture. Nick van Woert dismantles objects of the past to give them a strange and timeless appearance. Nick van Woert is convinced that what we are is influenced by our surroundings. He sees the body as the mirror of our environment.