1395 Days Without Red. A collaborative project by the artists with the collaboration of Ari Benjamin Meyers. The presentation includes two films, coproduced by MACBA and Artangel in cooperation with other major international bodies. 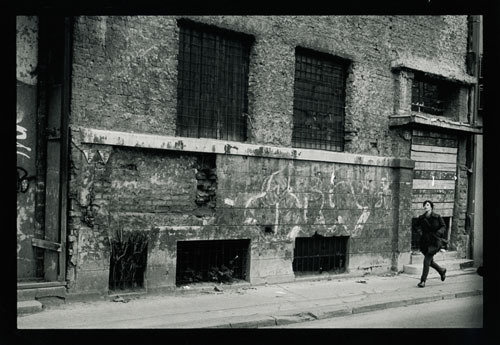 Within the framework of the MACBA Collection, the Museu d’Art Contemporani de Barcelona (MACBA) will present 1395 Days without Red (2011), a collaborative project by the artists Šejla Kamerić and Anri Sala, with the collaboration of Ari Benjamin Meyers. The presentation includes two films, coproduced by MACBA and Artangel (London) in cooperation with other major international bodies.

The siege of Sarajevo lasted 1,395 days. From 1992 to 1996, thousands of citizens had to cross streets threatened by snipers every day: to go to work, to buy food, to visit relatives… The camera follows a woman as she follows her daily route. The film was made in the city as it is today. The time of shooting this film is both present and past. On every corner, the woman is exposed to bullets, and each intersection requires fresh calculation before crossing.

The city’s geography maps a topography of exposure and protection, fear and relief. The film’s rhythm varies according to the speed at which the woman walks, accompanied by music, as she relives the experiences of other people in the exact place where the drama occurred. This is an individual journey into a collective past. The events of those times take place again in the present.

Šejla Kamerić (Sarajevo, 1976) belongs to a group of Balkan artists whose work reflects the dramatic process of the breakdown of the communist regimes and the consequent, painful search for national and social identity. An important focus in their work is on the conflict between traditions rooted in local culture and features from more global lifestyles. Adopting an active presence as an artist, Kamerić uses apparently trivial subjects and events to embody an entire process of identifying social shortcomings and needs.

Albanian by nationality, Anri Sala (Tirana, 1974) is one of the most outstanding young artists of the moment. His works are meditations on slowness in which camera movement is practically non-existent. In contrast with the speed of images in the media, Sala often freezes scenes into still shots in order to highlight apparently trivial details.