Always Forever Now. ''Timing is essential. Timing in performance. Timing in telling a joke. Timing for a successful robbery. Timing is extremely important for an artwork''. 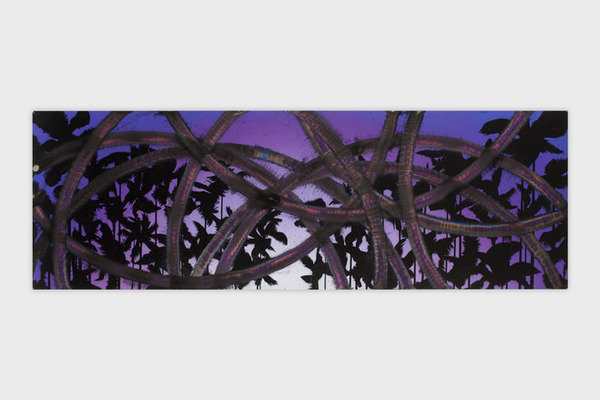 Almine Rech Gallery is pleased to announce its second solo exhibition of Aaron Young, Always Forever Now. Aaron Young was born in 1972 in San Francisco, California and lives and works in New York. His work has been the subject of numerous solo exhibitions including Tender Buttons at the Midway Contemporary Art Center, Minneapolis (2004); Greeting Card at the Park Avenue Armory, New York; and Slippery When Wet at MACRO, Rome (2010). Recent group exhibitions include P.S.1, New York (2005); the Serpentine Gallery, London (2006); the 2006 Whitney Biennial; the 2007 Moscow Biennial; KW Berlin (2008); the Saatchi Gallery, London (2010).

Julie Boukobza — In every show you seem to question over and over what it means to be an American artist today, by taking the pulse of “The Heartbeat of America”, to refer to one of your new works’ title.

Aaron Young — I can’t escape it. Actually, the title you mention is a slogan from the American automobile maker Chevrolet. The work I titled with it is an American flag painting that is stretched over a triangular stretcher, creating a memorial in reference to the death of the automobile industry in America, the recession, bailouts, etc.
Can you talk about the new piece “Mission Accomplished” ?

The way I like to use titles is to build them into the content of the work. Mission Accomplished is the phrase that was printed on a large sign and mounted high in the air on the aircraft carrier where George Bush delivered a victory speech announcing a U.S. led victory in the war with Iraq in 2003. The painting I use this title for is fairly large (6×8 feet) with a hyperreal image of an American flag Band — Aid. Band -Aids are a quick fix, they never last more that a day or so, they hide something ugly, they have no permanence. I thought the relationship between the two was amusing, but also tragic.
So a great amount of your work is related to the news, particularly television.

I’m a news junkie. News is like a puzzle to me. It is a make up of past, present and future. You have to sift through opinions, slants, twists and interests to find some kind of truth. I find this type of “unpacking” very close to art making because of the layering of meaning I find in artworks. Nothing should come easy.

If you randomly type “flag painting” on Google, only American flags will come up, and of course Jasper Johns’. How did you decide to confront history by making your own version of this iconic work ?

Timing is essential. Timing in performance. Timing in telling a joke. Timing for a successful robbery. Timing is extremely important for an artwork. Each layer of meaning, each choice made in creating the flag paintings should open up slowly as if a camera was zooming out from a tight closeup and freezing on an extremely wide landscape shot. Most Americans, or Westerners for that matter, are familiar with the image of an American flag folded triangularly through cinema or T.V. I thought it was an interesting time to unpack this baggage and understand what it means today.

Can you tell me about the genesis of the video “GoodBoy” ?

The GoodBoy video is a reflective work for me. What I mean is that I relate to it. I sometimes feel like its mirror image. I relate to the struggle, the need to please, the aggression and pain involved, the confrontation with authority, the notch in the hierarchy. I can go on, but the one thing that I believe people can relate to is the relationship. It doesn’t matter the gender, the animal, it’s about the need to connect.
Your work seems to have a lot to do with sexuality, not in terms of content or representation, but more with the way, you, as an artist, deal with your masculine and feminine side, the rough and the precious, the brutal and subtle. Is it relevant ?

I always liked the saying “Walk softly and carry a big stick.” It has a nice balance. If I were to name a few things I want out of an artwork they would be aggressive in action, poetic in rythm, realistic in scale, seductive in intellect and sinister in timing. Also, better if you have to use a hammer!
Interview realised by Julie Boukobza, on August 30th, 2011