A Way of Life. This exhibition attempts to show the modernity of the roman civilization, and memory must base our western culture. The exhibition will invite visitors to walk around in this house as if it were their own, creating the illusion that they are guests of the owners, despite the 2,000 years that separate us from them. 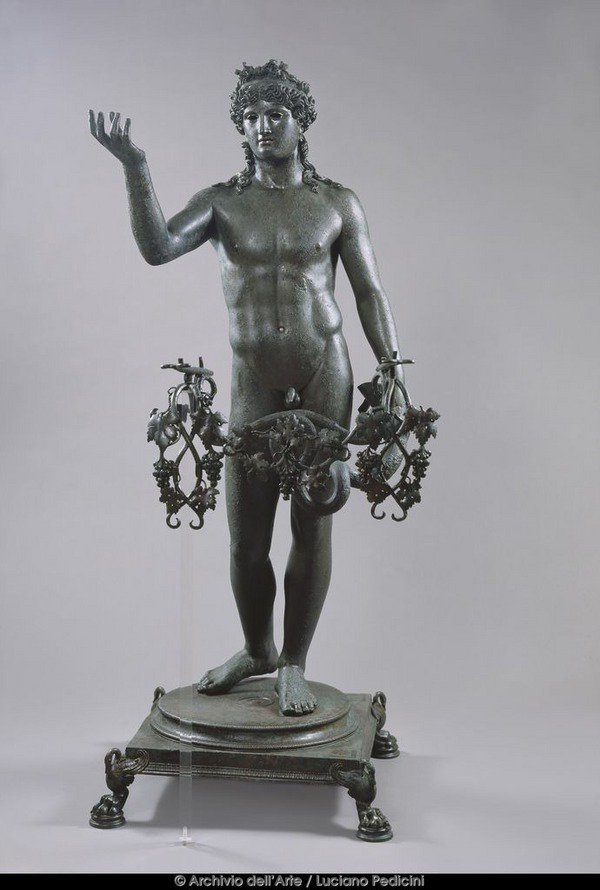 The Musée Maillol conceived this exhibition – under the guidance of the Italian Ministry for Cultural Heritage and Activity and of the Special Superintendence for the Archeological Heritage of Naples and Pompeii, and the museum’s artistic director, Patrizia Nitti, in accordance with the President of the Dina Vierny, Olivier Lorquin – to show the modernity of Roman civilisation, the bedrock and inevitable precursor of our Western culture. A domus pompeiana – a Pompeiian house – will be brought to life through its most famous and traditional rooms: the atrium, triclinium and culina, the peristyle around the garden, the balneum and venereum. Each room will be decorated with frescoes and objects, including 200 works from Pompeii and other sites around Vesuvius.

While there are numerous and often well preserved public monuments from the Roman Empire – theatres, amphitheatres, spas, temples – apart from the ones found buried by the eruption of Vesuvius in 79AD at Pompeii, Herculaneum, Oplontis and Stabiae, private houses are rare and have never been found complete anywhere else. These houses and villas still fascinate us because of their state of preservation. Their infrastructure – running water, heating systems, sewers, use of green spaces, right down to the design of their everyday objects – seems spectacularly modern. The exhibition will invite visitors to walk around in this house as if it were their own, creating the illusion that they are guests of the owners, despite the 2,000 years that separate us from them. "A civilisation’s fall often leads to its oblivion. From this point of view the Roman Empire is unusual to say the least. Thanks to the precious work of the copyists in mediaeval monasteries, a large number of written sources by historians, poets, rhetoricians, architects and lawyers have come down to us. We can thus reconstruct, almost year by year, the history, political life and conquests of Rome, that little village of shepherds on the Palatine Hill that became the capital of the Mediterranean world, the centre of an empire stretching westwards and eastwards from the Atlantic to the borders of Mesopotamia, and to the north and south from Hadrian’s Wall to the Sudan.

However this written knowledge is mainly about public events: battles, victories, or about the principles of law and major public building works. The ancient sources give us relatively little information about the private lives of ordinary people in the cities of the Empire, and where they do, it is glimpsed between the lines of a life of Caesar or within the exaggerated adventures of a Trimalchio. And the records don’t give us much more. Even when they are about private events such as death, their nature is essentially public. To tell the truth, most of what we know of the daily life of the Ancient Romans, and what forms the basis of our image of this civilisation – the image in ﬁlms like Gladiator or in the novels of Lindsey Davis – is owed to the excavations started more than two and a half centuries ago in the coastal towns of the Gulf of Naples that were buried by Vesuvius in 79 AD after the terrible eruption that in a few short hours put an end to all life there. Very few other events in the history of humanity can be compared to the magnitude of such destruction – probably only the ocean tsunamis in Asia or the atomic bombs of Hiroshima and Nagasaki. Yet, as Goethe realised, such a terrible event was destined to become a source of joy for posterity. Each new archeological discovery revealed by the excavations made people realise that this crystallisation had resulted in outstanding historical evidence. Even today, in an age when archeology has made huge progress right across the expanse that was the Roman Empire, and now that we know so much more about so many ancient sites, Pompeii has kept its value as a landmark, both as a precise, datable moment and also as a point of cultural comparison with all the discoveries that are made in the ﬁeld of Roman antiquity.

At the moment of their destruction, Pompeii and Herculaneum were towns that already had several centuries of history behind them, just like most Italian cities of the time. Yet politically they weren’t particularly important. And it’s exactly that “ordinary” nature that is worth highlighting, for these two towns constituted a representative sample of Roman civilisation, far from the distortions that the status of capital inevitably gave to Rome. That is why, right from the ﬁrst archeological discoveries in the middle of the 18th century, attention was drawn to the numerous traces of daily life. In Rome, or in the ancient European cities of Roman origin, you could certainly see great monuments, amphitheatres, temples, aqueducts, even roads, or impressive tombs that had survived the collapse of the ancient world and lasted into the Middle Ages. But where were the houses? No one had ever seen one in its entirety; there might just be the odd room hidden here and there in some cave in a Roman hill. Even if such rooms were occasionally magniﬁcently decorated with frescoes, there was no Ancient Roman house that could be studied from the point of view of surveying it to try to understand what the ancient sources meant when they spoke of atriums, peristyles and tablinums. The shock came ﬁrst at Pompeii, for at Herculaneum they had already started to excavate the theatre, discovering a plethora of statues in marble and bronze. Visitors to those Pompeii houses were impressed of course by the abundance of painted decorations and mosaics, as well as by the variety of objects found there, but above all they were struck by the small size of the buildings. Goethe went as far as calling them “dolls’ houses”, which hardly ﬁtted with the expected “magniﬁcence of the Ancient Romans”, if the etchings of Piranesi were to be relied upon.

That surprise was soon followed by enthusiasm. These houses revealed an extremely reﬁned way of life. There had been running water in every household, thanks to a system of hydraulic pipework, and every house had its own garden. There was a vibrant cultural life, even at a domestic level, as could be inferred from reading the many pieces of grafﬁti. Foreign religions were accepted, even within local sanctuaries. The dissolute of course praised the liberal approach to sex, but it could also be observed that an unexpected number of citizens took part in local elections. The shock was particularly harsh for young European architects who came to acquire their “good taste” in the Roman Academies, and who were obliged to study antiquity by copying the great classical monuments and by adopting the principles of Vitruvius. The Pompeii houses became the new models that they had to follow. As well as the usual surveys, these architects created “restorations” that would bring back colour and life to the bare ruins that Herculaneum and Pompeii had become. What also changed was that any artist who wanted to paint a Roman interior could from now on only take his inspiration from a Pompeii house and from the huge collection of furniture that the King of Naples put on display ﬁrst in Portici then in Naples itself. The paintings and mosaics that were discovered also inevitably became models, whether it was the works left in situ or those that had been taken away and displayed in royal collections. The Napoleonic Neo-Classicism of David gave way to the more intimist pictures of the Romantic painters who were moved by Edward Bulwer-Lytton’s novel The Last Days of Pompeii. In that book the house of the protagonist, Glaucus, was directly inspired by one that was lovingly reconstructed by the archeologist Désiré-Raoul Rochette. It’s impossible too not to mention Lawrence Alma-Tadema, who had a very rich collection of photographs from Pompeii that he kept in his studio.

Those who had the means even wanted to have their own “Pompeinum” made, starting with King Louis I of Bavaria at Aschaffenburg, built by Friedrich von Gärtner between 1840 and 1848. In Paris, Prince Napoleon (1822-1891), son of Jérôme Bonaparte, commissioned a “Pompeian House” for his residence at 18 avenue Montaigne, Paris, from the architect Alfred-Nicolas Normand. A former member of the Academy of France in Rome who had made magniﬁcent drawings at Pompeii, Normand built what was without doubt his masterpiece, a town house which has disappeared today but which was recorded for 5posterity by Gustave Boulanger in a famous painting. And what about the Villa Kérylos, built at Beaulieu-sur-Mer by Théodore Reinach, which mixed Greece and Pompeii, or even the majestic villa built more recently for John Paul Getty at Malibu, directly modelled on the Villa des Papyrus at Herculaneum? This rediscovered world was quickly peopled with inhabitants. First, of course, were the heroes of novels such as Arria Marcella, dreamed up by Théophile Gautier. Then came plaster casts of the victims of the eruption, recreated by Fiorelli, using his own technique. Finally it was Pompeii’s ghosts, such as the haunting Gradiva in a story by W. Jensen, the subject of a famous psychoanalytical study by Sigmund Freud.

With time archeologists have learnt to carry out detailed excavations of the Pompeian house You could simply say the Roman house – distinguishing between the different types of design, eras of construction and styles of decoration. They have learnt to differentiate found objects increasingly accurately between those made locally and those that had been imported. They have discovered how to distinguish between the different social classes of the population, even though it is very difﬁcult to do so: besides the citizens, they had to count freemen, slaves, who left almost no traces even though there were many of them, and women. This kind of knowledge makes a visit to Pompeii, to Herculaneum or to the Naples Museum even more interesting because it takes us beyond the cliché too often promoted by mass tourism, which all too easily portrays Pompeii as the town of pleasure and death. At what is a difﬁcult time for the conservation of these ancient cities, an exhibition at the Musée Maillol on such an important subject as the Pompei house aims to remind Europe of the debt of knowledge its culture owes to Herculaneum and Pompeii. As unique witnesses to the ancient world, these towns are quite rightly classed as UNESCO world heritage sites. The more so because they belong to our culture, thanks to the excavations that have been carried out in these past centuries and which have made them part of the archeological techniques and artistic taste that are now ours. The Pompeii house is therefore doubly revealing: both of what we were 2,000 years ago and what we have been for the last two and a half centuries."
Stefano De Caro, Honorary Director General of Archeological Heritage, professor at the University of Federico II in Naples