The internationally renowned artists Anri Sala, Yang Ah Ham, Philippe Parreno, and Jorge Pardo under the theme of communication. The four have worked together and apart with common and diverging themes: the intimacies of everyday life, social messages, and the eternal dialogue between the arts. 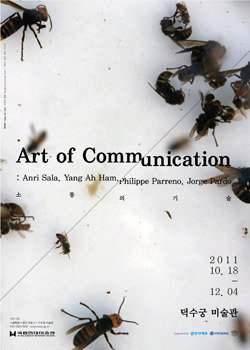 Contemporary art is a guidepost of social trends. The works of contemporary artists in museums are more than objects of beauty or standards of aesthetics; they are objects with specific practical functions in the social context of everyday life. In this sense, interacting with contemporary art is not an exercise in knowledge of art. Rather it calls for empathy that precedes inspiration, flashes of self-awareness that shine the light of insight at unexpected moments.

The exhibit Art of Communication: Anri Sala, Yang Ah Ham, Philippe Parreno, Jorge Pardo brings together the art of four internationally renowned artists Anri Sala, Yang Ah Ham, Philippe Parreno, and Jorge Pardo under the theme of communication.
The four have worked together and apart with common and diverging themes: the intimacies of everyday life, social messages, and the eternal dialogue between the arts. Their art, replete with both particular and universal sensibilities, now come together with audiences in the contemporary city of Seoul to strike the spark of communication and creative imagination.

Communication is the most common of themes and the most basic question there is. To build society on the basis of communication, we give language the socially promised meaning of the langue and communicate by those rules. But the individual, speaking and writing, each creates and imagines a unique language beyond the social promise, the parole. The social meaning of "apple" (langue) may be pomaceous fruit of the apple tree, species Malus domestica in the rose family (Rosaceae), but in Snow White's language (parole) it is a poisoned weapon that symbolizes the hatred of her stepmother. For a fan of Apple products, it means the creativity and innovation of Steve Jobs. If Snow White and an Apple fan were to talk about apples they will find each other talking about different things. The exhibit focuses on that mismatch, conversations and relationships slipping through the cracks and gaping abysses between langue and parole. The displayed art plays with the limits and expansion of everyday communication through colors, music, fantasy, and metaphor.

A series of artists who appeared on the international stage in 1990 showed great interest in the dialectics of art, everyday life, and communication of individuals and societies. They went in new directions and blazes new paths in their search for answers and more questions. Nicolas Bourriaud analyzes their work through the framework of Relational Aesthetics. He found the focus of these 1990s artists in the link between the artist's daily life and social perspectives. Unlike art in the 1980s, which drew clear lines of separation between the self and the other and showed a collective and political bent, their successors a decade later showed more diversity, each voice different and sometimes ambivalent in their blending of the social and the personal. Angela Bulloch, Maurizio Cattelan, Liam Gilick, Rikrit Tiravanija, Dominique Gonzalez Foester, Douglas Gordon, Carsten Holler, Pierre Huyghe, Jorge Pardo, Philippe Parreno and others are active in film, publishing, and exhibitions, their interests and works often crossing and overlapping.
The ways these artists communicate with society are both varied and personal. Each artist's personal roots and experiences are intimately tied to their work. Artists in the Art of Communication exhibit work on the international stage, but their backgrounds in places as diverse as Algeria, Albania, Cuba, and Seoul are reflected in their unique aesthetic perspectives. Where this mix of styles and worlds meet Korea, communication is just out of reach but tantalizingly close, a tension rich with creativity and desire.

Anri Sala(1974- ) is a media artist from Albania who works from Berlin and Paris. Being from what used to be the most closed-off country in Europe, his early interest was in communication and relationships in a closed society.

Yang Ah Ham(1968- ) expresses the intimate and discomforting narrative of the personal and social through descriptive images and installations. Moving between Seoul, Amsterdam, and Istanbul, she looks at society with the eyes of an outsider instead of a member.

Philippe Parreno(1964- ) is a filmmaker and writer from Algeria. His works display the power of art to process reality, through installation exhibits that call to mind the theatrical stage. Just as the ancient Greek temples were routes of communication between gods and mortals, museums and exhibitions are the crossroads of imagination and reality.

Jorge Pardo(1963- ) from Cuba mixes everyday designs and architecture in his art. The objects, making eager use of color and light, are sensual, poetic, and rhythmical. The objects exhibited are personal items such as lamps, tables, and chairs, but also play a public role as works of art. These everyday objects also indirectly reveal the social context and background in which they were born.