The museum re-opens to the public with a range of established, mid-career, and emerging contemporary artists with diverse working practices: Bill Viola, Liza Lou, Stephen Antanakos, Kendall Buster, Kehinde Wiley, Alfredo Jaar and a special screening of Nick Cave. The new Andre' Leon Talley Gallery will celebrate style and design, in addiction rotating exhibitions that feature selections from the Walter O. Evans Collection of African American Art, the Earle W. Newton Collection of British and American Art and are scheduled talks, lectures and other events. 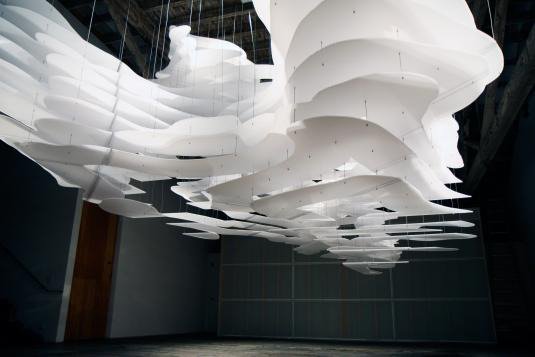 The Savannah College of Art and Design to Open Major Teaching Museum Devoted
to Contemporary Art and Design on Oct. 29, 2011
82,000 sq. ft. space designed to enhance SCAD’s education initiatives with new exhibition program and integrating one of the
city’s most important historic landmarks

As part of the reopening program at the new SCAD Museum of Art, the Savannah College of Art and Design will present a series of seven major contemporary art exhibitions, including: Bill Viola, The Crossing; Liza Lou, Let the Light In; Stephen Antanakos, Tessares; Kendall Buster, New Growth: Stratum Field; Kehinde Wiley, Selected Works; the U.S. debut of Alfredo Jaar, May 1, 2011, and a special screening of Nick Cave, Drive-By. Representing a range of established, mid-career, and emerging contemporary artists with diverse working practices, the inaugural exhibitions provide SCAD students and faculty with direct access to work by some of the most influential artists today.

“SCAD has a tradition of fostering innovative and dynamic art experiences, and the SCAD Museum of Art advances this rich tradition,” says
SCAD President Paula Wallace, who initiated and oversaw the development of the expanded museum in Savannah. “Rather than a place
to view artworks in isolation, our museum is a kinetic think-tank, a collaborative wellspring of ideas and inspiration for SCAD students and
professors.”

In keeping with the university’s mission, a year-round program of exhibitions, installations, performances and museum programs
and events will engage with SCAD’s 41 majors and more than 50 minors - from fashion and fibers to painting and sound design. This
programming will also provide students and professors across all disciplines a collaborative space to experience celebrated works of
art and design, and to interact with the renowned and emerging artists who create them.

The design of the new museum was conceived by President Wallace and Senior Vice President for College Resources Glenn Wallace.
SCAD alumnus and professor Christian Sottile of Sottile & Sottile and Lord, Aeck & Sargent Architects, in association with Dawson
Architects, executed the design, which was supervised by SCAD alumnus Martin Smith, executive director of design and new
construction.

With a career spanning more than four decades, Bill Viola has been a pioneer in the field of video art. Co‐commissioned by SCAD in 1996 with support from The Bohen Foundation, The Crossing premiered in Savannah and has since been exhibited around the world. Rich in metaphor and grounded in shared spiritual beliefs of East and West, this canonical film celebrates Viola's signature ability to convey complex themes with scale and sound.

In her newest body of work, Lou creates sculptures and reliefs that reference common objects such as ropes, book pages and fencing that, when layered or made into multiples and then cloaked in brilliant glass beads, evoke themes of containment, labor and repetition. With simultaneous delicacy and command, these unexpected and alluring surfaces invite investigation while disrupting our perceptions of physical barriers and confined spaces. A community of artisans works together to assist Lou in her practice of transforming the purpose of these everyday objects and upending their symbolic references of exclusion and confinement. In doing so, they share stories, songs and time, thus imbuing Lou's work with a collective spirit and illuminating the sensibility of human workmanship. Included in Lou's exhibition will be large-scale sculptures presented inside the museum, as well as an outdoor installation in the new SCAD Museum of Art courtyard.

Stephen Antonakos is an abstract formalist and a pioneer in new uses of neon in art since 1960. His work is related to Minimalism in its intention to be seen as "real things in real space in the here and now." He has a particular interest in bringing the architecture and the space of the site into the viewer's experience. Taking the white square as a classical geometric starting-point, and given the artist's restrained execution, the four neon panels in Tessares show how very different feelings and meanings may result from subtle formal and chromatic variations.

Stephen Antonakos was born in Greece, and grew up in New York. He has exhibited in more than 100 solo shows, more than 250 group shows, and has realized more than 50 public works installed in the United States, Europe, and Japan. He lives and works in New York City.

Commissioned by SCAD for the debut of the SCAD Museum of Art, "New Growth: Stratum Field" is a site-specific sculptural installation designed and constructed to converse with the resonant features of the museum's new 290-foot south-facing gallery. Recalling the artist's most iconic structural forms, this work explores biological architecture in all its many incarnations.

Los Angeles native and New York-based visual artist Kehinde Wiley has firmly situated himself within art history's portrait painting tradition. As a contemporary descendent of a long line of portraitists—including Reynolds, Gainsborough, Titian, Ingres and others—Wiley engages the visual rhetoric of the heroic, powerful and sublime in his representations of young men of color. Wiley's solo project at the SCAD Museum of Art will include large-scale paintings as well as a selection of works on paper.

Presented for the first time in the U.S., Alfredo Jaar's May 1, 2011 installation is a poetic, conceptual, and socio-politically meditation on the power, and absence, of images. The installation is comprised of two juxtaposed monitors: a blank screen flanked by a framed white image; and another screen showing the now iconic official White House press image of President Obama sitting among his national security team as they stare at something outside the image field. The media surrounding the publication of this photograph has led viewers to believe that the individuals were watching live footage of the capture and killing al-Qaida leader Osama bin Laden. A diagram to the right of the monitor notes the names and titles of the various political and military figures in the room. With poignant staging, Jaar employs the symbolism of the "non-image", inviting viewers to question what is not shown.

A special screening of Nick Cave's Drive-By, a recent SCAD acquisition, will be presented at the Matthew Mascotte Theater Plaza on the evenings of Wednesday, Oct. 26, 2011, and Thursday, Oct. 27, 2011. The film will begin screening intermittently at dusk.

Related programming, including talks, lectures and other events, will be scheduled in conjunction with SCAD Museum of Art's exhibitions. A conversation between André Leon Talley and artist Kehinde Wiley will be held at the SCAD Museum of Art theater on Friday, Oct. 28, at 4 p.m.