Home Made Tasers. Utilizing handmade costumes and sets, her work draws on a wide range of influences from film and television, to literature, art history, and philosophy. As in her previous projects, the installation is conceived specifically for the site, which is activated by performances and direct interactions with audiences for the duration of the exhibition. The show inaugurates the new pop-up program focused on new productions by emerging artists from around the world. 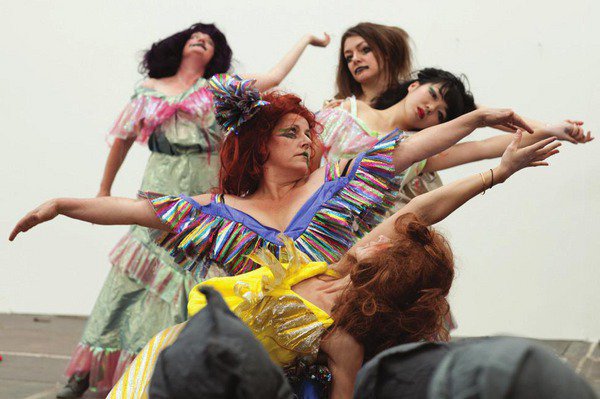 New York, NY...This fall, the New Museum will launch a new pop-up program in its adjacent street-level storefront space at 231 BOWERY called ‘Studio 231.’ This series, overseen by Massimiliano Gioni, Associate Director and Director of Exhibitions, will focus on ambitious new productions by emerging artists from around the world in a space that suggests the creative environment and improvisational potential of the studio. The Museum will inaugurate the series on October 26, 2011, with a new installation and performances by Spartacus Chetwynd.

This will be the first American museum exhibition by the London-based artist. Over the past ten years, Chetwynd and her traveling band of amateur actors have realized a number of exhibitions and performances throughout Europe. Utilizing handmade costumes and sets, her work draws on a wide range of influences from film and television, to literature, art history, and philosophy. As in her previous projects, the installation at 231 BOWERY will be conceived specifically for the site, which will be activated by performances and direct interactions with audiences for the duration of the exhibition. “Spartacus Chetwynd: Home Made Tasers” will be on view from October 26, 2011–January 1, 2012, and is organized by Gary Carrion-Murayari, New Museum Associate Curator.

Spartacus Chetwynd draws from a variety of historical theatrical forms, from Brechtian drama to puppet shows, often within the same performance. The result is an experience that is accessible, humorous, and disorienting. Chetwynd, who initially studied anthropology, uses the idea of bricolage as a physical practice as well as the organizing principle to bring together the disparate images and characters within her work. The carnivalesque world she creates is one in which figures like Emperor Nero, Mae West, Karl Marx, and Jabba the Hut can comfortably, if not peacefully, co-exist. The informality of Chetwynd’s performance and the effortless mix of high and low sources turn her performances into remarkably democratic spaces for exploring ideas about history, class, and contemporary culture.

About ‘Studio 231’
‘Studio 231’ is a platform for international emerging artists to realize ambitious new works conceived especially for a street level space. The projects at ‘Studio 231’ also seek to foster a new relationship between the artists and the public by allowing artists to create work outside the confines of the main museum building and in closer proximity to the energy of the street and to the creative space of the artist’s studio.

About Spartacus Chetwynd
Spartacus Chetwynd was born in London in 1973, where she currently lives and works. Chetwynd studied Social Anthropology at University College London, received a BA from the Slade School of Fine Art in 2000, and earned an MA in painting in 2004, from the Royal College of Art. She has performed and exhibited and Sadie Coles HQ, London widely across the United Kingdom and Europe. Her solo exhibitions include The Golden Resistance, Tate & Egg Live, Tate Britain, London (2003); Delirious, Serpentine Gallery Pavilion, London (2006); Help! I’m Trapped in a Muzuzah Factory, Le Consortium, Dijon (2008); Spartacus Chetwynd, migros museum für gegenwartskunst, Zurich, Switzerland; and Odd Man Out, Sadie Coles HQ, London (2011). Her group exhibitions include Altermodern, Tate Triennial, London (2009); and In the Days of the Comet, British Art Show, London (2010). She was nominated and shortlisted for the Beck’s Futures Prize (2005) as well as the MaxMara Art Prize (2011).

Support
“Spartacus Chetwynd: Home Made Tasers” is made possible, in part, by the Toby Devan Lewis Emerging Artists Exhibitions Fund.

Generous support for ‘Studio 231’ is provided by the Board of Trustees of the New Museum.

About the New Museum
The New Museum is the only museum in New York City exclusively devoted to contemporary art. Founded in 1977, the New Museum was conceived as a center for exhibitions, information, and documentation about living artists from around the world. From its beginnings as a one-room office on Hudson Street to the inauguration of its first freestanding, dedicated building on the Bowery designed by SANAA in 2007, the New Museum continues to be a place of ongoing experimentation and a hub of new art and new ideas.

In September 2008, the Museum announced its acquisition of the adjacent building at 231 Bowery as part of a long-range plan for institutional growth. Historically, the 231 Bowery loft spaces have been home to such artists as James Rosenquist, Robert Indiana, and Will Insley. In May 2011, during its Festival of Ideas for the New City, the Museum presented its first program at the site with “Cronocaos,” a temporary exhibition about the increasingly urgent topic of preservation in architecture and urbanism, by OMA/Rem Koolhaas.