The exhibition presents about two hundred selected works from the F.C. Gundlach Collection (Hamburg), explores the subject of fashion and photography. Dating from the late 1920s to the present, the photographs shown confront us with staged images of clothing fashion. With works by Richard Avedon, Cecil Beaton, William Klein, David Lachapelle, Zoe Leonard, Helmut Newton, Irving Penn... The show will be accompanied by a program of films. 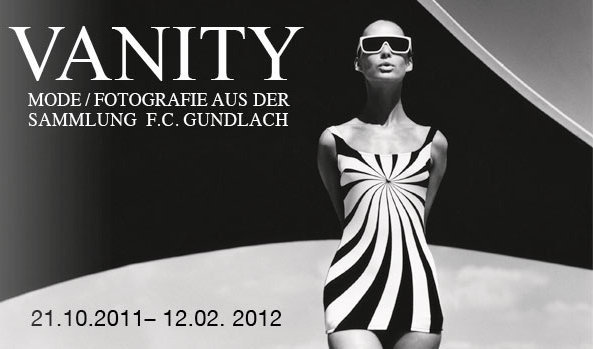 Beauty is the most important word in the dictionary.
Cecil Beaton

Fashion is a manifestation of ideals of beauty and social change, an expressive play between belonging and distinction, communication and trend. Its only constant factor is permanent change. In the sphere of beautiful appearances fashion/photography works in a both anticipatory and historicizing way: it reflects the change it creates.

As part of the Kunsthalle Wien’s special photography program, the exhibition Vanity, which presents about two hundred selected works from the F.C. Gundlach Collection (Hamburg), explores the subject of fashion and photography. F.C. Gundlach, who was born in Heinebach, Hesse in 1926, was a legendary fashion photographer himself who produced 180 covers and 5,500 pages for the editorial section of the magazine Brigitte alone. The gallery owner, collector, curator, and founder regards fashion photography as the most unequivocal indicator of social contexts: “Fashion photographs are always interpretations, results from a mise en scène. They reflect and visualize the day’s zeitgeist and anticipate that of tomorrow.”

Dating from the late 1920s to the present, the photographs shown in the exhibition Vanity confront us with staged images of clothing fashion. Great gestures and glamorous ideals are the concern of artists from George Hoyningen Huene and Irving Penn to Richard Avedon and William Klein. Next to famous photographs for Vogue and Harper’s Bazaar by Horst P. Horst, Erwin Blumenfeld, and others, the show centers on pictures of costumes by Cecil Beaton and F.C. Gundlach’s presentations of Pop and Op Art fashion. Taking these approaches as a starting point, the exhibition proceeds to highlight formal aspects of composition tending toward graphic abstraction (Imre von Santho), painting (Sarah Moon and Lillian Bassman), or sculpture (George Hurrell and Regina Relang). Again and again, the visualization of glamour, elegance, and femininity in the form of fashion photographs reveals the influence of contemporary art movements and classicist vocabulary. While dresses are the center of attention in fashion photographs until the 1960s, young photographers such as Guy Bourdin and Helmut Newton answer with conceptual strategies of mystification and detached irony from the 1970s on. The most recent works in the exhibition playfully relate to the object character of their subjects, which may have become unwearable like the dress made from stuffed animals Armin Morbach confronts us with, or turn the extravagant rendering of ephemeral clothes into a mannerist postmodern quotation (Kristian Schuller). Five artistic positions underpin the credo of the intertextual nature of photography behind the F.C. Gundlach collection and subtly undermine the fashion industry’s self understanding: among them Wols’s with dramatic renderings of mannequins at the Paris World Fair of 1937, Leon Levinstein’s with street photography works shot in New York and San Francisco between 1955 and 1975, and Edgar Leciejewski’s with a series of pictures of people taken from Google Street View, which take a stand on the issue of individuality and the public sphere in the era of the Internet and social networks. Ultimately, fashion photography, as a medium of the self representation of society, reveals the shift of cultural interest from products to brands, images, and events. Considering the popularity of fashion blogs and live streams, the importance of magazines, the epitome of the twentieth century communication medium for fashion, seems to be on the wane. The musealized form of fashion photography becomes evident as medium of memory, which creates fashion as myth.

The exhibition will be accompanied by a program of films on and by the photographers represented in the show.