Queer Spirits and Other Invocations... His exhibition includes a performance which the artist describes as ''a secret gathering of a group of gay men, who shamanistically summon spirits into their midst in a ritual that combines elements of group therapy, voodoo, and chaos magic''. The remnants of the events, will be on view. In addition, the show includes a selection of almost life-sized diamond-covered silkscreen prints depicting the shaman/artist. 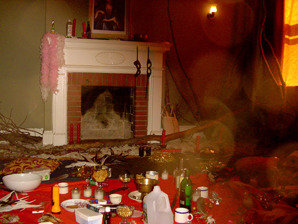 Esther Schipper is pleased to present a solo exhibition of the New York-based artist AA Bronson in the gallery.

AA Bronson’s artwork deals with trauma, loss, death and healing. His first exhibition at Esther Schipper includes a performance of Invocation of the Queer Spirits, which the artist describes as “a secret gathering of a group of gay men, who shamanistically summon spirits into their midst in a ritual that combines elements of group therapy, voodoo, and chaos magic”. The remnants of the evening’s events, including butt plugs, rooster feathers, and an empty whiskey bottle will be on view after the performance, leaving the visitors to mentally reconstruct what happened. After the first invocation, held in a little cabin provided by the Banff Center for the Arts in the Canadian Rockies in 2008, Bronson went on to perform invocations at specifically chosen sites in the devastated ninth ward of New Orleans, an abandoned store in Winnipeg, the remains of an historic military site on Governors Island off the tip of Manhattan, and the gay mecca of Fire Island Pines. The performance in Berlin will be his sixth Invocation.

In addition, the show includes a selection of almost life-sized diamond-covered silkscreen prints depicting the shaman/artist naked, wearing only a tail of rooster feathers and a leather cap, and titled –with reference to Joseph Beuys– We Are the Revolution, 2011. A number of collaborations with younger artists will also be on view, including: a traditional fortune-teller’s tent, Cabine, 2008, a collaboration with Scott Treleaven; a large performance painting records a sex ritual with the Chicago artist Elijah Burgher, and three large digital paintings present the collaborative performance Black Red Gold, 2011 with New York-based Ryan Brewer. The exhibition "Queer Spirits and Other Invocations..." is curated by Frédéric Bonnet and completed by a work from 1969: a series of monoprints of parts of the artist’s body that are assembled to make a life-sized self-portrait.

AA Bronson has had solo exhibitions at the Vienna Secession, Austria (2000), the Museum of Contemporary Art, Chicago (2001), the MIT List Visual Arts Center, Cambridge (2002), The Power Plant in Toronto (2003) and the Morris and Helen Belkin Art Gallery, Vancouver (2004). Most recently, he was featured in the group exhibition Hide/Seek at the National Portrait Gallery in Washington, D.C., which travels to the Brooklyn Museum. He lives and works in New York and Fire Island Pines.

Between 1969 and 1994 Bronson together with Jorge Zontal and Felix Partz worked as the artist group General Idea. Their collaboration was terminated with the death of both Zontal and Partz of AIDS in 1994. AA Bronson has been working independently since that time.