Fourth edition of the internationally acclaimed biennial of new visual art performance. It features more than 100 international artists and 10 new performa commissions in spectacuar city-wide events. An innovative program breaking down the boundaries between visual art, music, dance, poetry, fashion, architecture, graphic design, and the culinary arts. Presented in collaboration with a consortium of more than 50 arts institutions and over 50 curators, as well as a network of public spaces and private venues across the city. 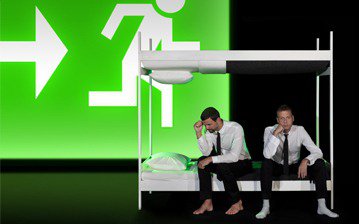 Performa is pleased to announce its fourth visual art performance biennial, Performa 11, taking place November 1–21, 2011, throughout New York City. Performa 11 will feature performances by over 100 of the most exciting contemporary artists, including 12 Performa Commissions by acclaimed artists from around the world, as well as Performa Premieres and a host of new works by up-and- coming artists. This yearʼs biennial will be a thrilling showcase of live culture across all artistic disciplines, taking place at over 80 venues throughout New York City and presented in collaboration with a consortium of over 40 arts and cultural organizations.

Since Performaʼs first biennial took New York City by storm in 2005, Performa has succeeded in presenting the nationʼs first and only live visual art performance biennial. It has become one of the most anticipated art events in the country and internationally, having reached an audience of over 70,000 people. With its biennial, Performa has not only changed the course of performance art history, but it has also caused a ripple effect around the world with museums, organizations, and festivals incorporating performance into their programming. Once again, Performa will present its critically acclaimed series of Commissions and Premieres, many by artists who have never worked live before, and will create a one-of-a-kind opportunity to see, hear, and taste the freshest ideas, enjoy new artistic perspectives, and experience New York City like never before.

RoseLee Goldberg, Performaʼs Founding Director and Curator, says, “In just five years, Performa has changed peopleʼs minds about the very nature and meaning of artistsʼ performance. It has shown it to be an inspiring, profound, and accessible platform for exciting new ideas. Performa gives the public a highly selected but broad overview of performance in different disciplines, and, in just three weeks, viewers can come to understand the most important new developments in contemporary art and culture. It is thrilling to work with Performa artists to realize their extraordinary visions.”

PROGRAM
Over its three-week run, the Performa Hub, designed by nOffice, will function as the biennialʼs headquarters, offering a venue for special performances, screenings, panel discussions, bookshop, lounge, and a visitor information center. To program this yearʼs biennial, Performa will draw upon the rich cultural landscape of New York City by partnering with over 40 innovative local arts and cultural organizations. Working with this consortium of presenting partners, the biennial will create a lively dialogue through different disciplines working and thinking together. This collaboration creates an exciting cultural atmosphere; a unique cross-pollination think tank with an exchange of ideas, sharing of resources, and new connections between organizations and arts professionals.

Performa Board of Directors Chair Jeanne Greenberg Rohatyn adds, “Performaʼs biennial will once again transform the landscape of New York and send a jolt of energy throughout the city. Performa 11 will provide a unique opportunity to see live events in all disciplines of the arts. Whether a modest performance or a large-scale production, there is always a sense that you have to be there.”

COMMISSIONS
A central part of Performaʼs biennials are its Commissions, which originate exciting new performances by visual artists, many of whom have never worked live before. This year, Performa will present 12 new Performa Commissions by both established and up-and- coming artists. Artists receive unparallel support to realize powerful, intellectually reflective, and artistically innovative works of live performance that vary widely in scale, taking place at venues from a small local bar to a large opera house.

HISTORICAL AND RESEARCH THEMES
Along with presenting new work, Performa also provides a link to the past with historical and research themes focusing on performance history from the twentieth century. This yearʼs research theme, Language, Translation, and Misinformation will investigate the use of language in the field of performance by visual artists versus that of theater actors. The two historical themes, Russian Constructivism (1913–1940s) and Fluxus (1960s) — which both used language in a visual art context — along with the research theme will act as a point of departure for the work selected for the biennial program.

ABOUT PERFORMA 11
Performa 11, the fourth edition of the internationally acclaimed biennial of new visual art performance presented by Performa, will be held in New York City from November 1–21, 2011. The three-week biennial will showcase new work by more than 100 of the most exciting artists working today, in an innovative program breaking down the boundaries between visual art, music, dance, poetry, fashion, architecture, graphic design, and the culinary arts. Presented in collaboration with a consortium of more than 50 arts institutions and 25 curators, as well as a network of public spaces and private venues across the city, Performa 11 will ignite New York City with energy and ideas, acting as a vital “think tank” linking minds across the five boroughs and bringing audiences together for brilliant new performances in all disciplines.

Founded in 2004 by art historian and curator RoseLee Goldberg, Performa is the leading organization dedicated to exploring the critical role of live performance in the history of twentieth-century art and to encouraging new directions in performance for the twenty-first century. Performa launched New Yorkʼs first performance biennial, Performa 05, in 2005, followed by Performa 07 (2007), and Performa 09 (2009).

Tuesday, November 1 - Monday, November 21
For Performa 11, Julieta Aranda and Carlos Motta (b. 1975, Mexico City, Mexico; b. 1978 Bogota, Colombia) have invited a group of international contributors to reflect on New York City as a cross-cultural terrain and as a public space for constant cultural translations and negotiations, in a publication/supplement titled Broken English. Working with the curatorial threads of Performa 11, the supplement will act as a witness of New York’s cultural history and will present writings by artists and cultural producers that have been active in different capacities for the past 30 years, including:

Treating New York City as site for all sorts of personal and collective encounters/misses/near-misses, the supplement promises to be a fertile ground for a discussion of issues of urbanism, architecture, cultural policy, art production, the role of underground etc. (The publication will focus on the suspension of individual and group ideologies, cultural behaviors, moral attitudes, lifestyles, and beliefs when faced with other people and communities in the urban environment.). For the design of the supplement, Aranda and Motta will draw from Constructivist and propaganda aesthetics, featuring both new commissioned texts as well as reprints of historical texts. A public launch is scheduled for November 12. A Performa Project. Curated by Defne Ayas.

Aranda and Motta's collaboration started with Arts & Leisure, a one-time tabloid newspaper commissioned by Art in General and co-published with e-flux in 2005. The tabloid drew its title from the New York Time's cultural section making emphasis on its equivalence of arts and/to leisure. Using a journalistic style to inquire about the crisis pertaining art criticism and complacency with commercial structures of art discussion, the project presented poignant texts, articles, texts and humorous contributions (cross word puzzles, horoscope, letters to the editor, etc.) by over 20 international cultural producers.

Fluxus and the Essential Questions of Life

Over 100 works dating primarily from the 1960s and '70s and a performance by Larry Miller offer a fresh look at Fluxus, designed to spark multiple interpretations, exploring the works' relationships to key themes of human existence and what they can teach us about our own position in the world. Presented by Grey Art Gallery. Curated by Jacquelynn Baas.

Garage Center for Contemporary Culture in Moscow and Performa Present

Performa and Garage Center for Contemporary Culture present a major new collaborative project entitled 33 Fragments of Russian Performance as part of Performa 11, on view November 2–23, 2011. The exhibition will include performance archives, photographs, and videos documenting Russian performance in both the historical avant-garde of the 1920s and contemporary periods. Presented at the Performa Hub and curated by Garage curator Yulia Aksenova in collaboration with Performa Founding Director and Curator RoseLee Goldberg, the exhibition will also include a lecture by renowned Russian art critic Alexandra Obukhova and a performance by Andrey Kuzkin.

33 Fragments will explore the rich tradition of performance in Russia and its development during the 20th and 21st centuries. Performance art, or ‘live’ art, emerged strongly in the Russian art scene of the 1960s, although performance was popular in the projects of the avant-garde at the beginning of the 20th century. The avant-garde artists of the 1920s were pioneers who created entirely new means for articulating ideas to reach the mass public emancipated by the revolution. Using experimental techniques and mixing genres, they sought to release their works from the constraints of traditional, established artistic media, focusing instead on their bodies within time and space.

Presenting Russian performance in all its diversity, the exhibition demonstrates the integral role it has played in the country’s artistic development and the crucial means for freedom of speech it has offered in a century marked by political repression and censorship. Performance in Russia became an essential vehicle for engaging with a multitude of discourses in art, politics and society at the most critical moments in Russian history. This has persisted into the 21st century as a new generation of performance artists continues to tackle issues at the core of contemporary Russian society.

As one of the biennial’s historical themes, centering on Russian Constructivism, Performa 11 will present a series of seminars, workshops and conferences which contemplates the early 20th century Russian avant-garde and considers its power and continuing relevance. 33 Fragments also marks a continued partnership between Performa and Garage which began with the third installment of the exhibition 100 Years of Performance, curated by RoseLee Goldberg and Klaus Biesenbach, and presented at Garage in Moscow in 2010.

Opening Night of Performa 11 with feature the world premiere performance by Elmgreen & Dragset, followed by an exceptional party featuring a retrospective of live performances by the artists.