The exhibition includes performance archives, photographs, and videos documenting in both the historical avant-garde of the 1920s and contemporary periods. The first section traces the early development of performance with documentation from visionary early Russian artists; the second part is devoted to performance's resurgence in the politically turbulent 1960s and 1970s and follows the genre's evolution into its current form. The show illustrates the crucial position of non-official, underground movements, notably Moscow Conceptualism, Sots Art, and their key protagonists. 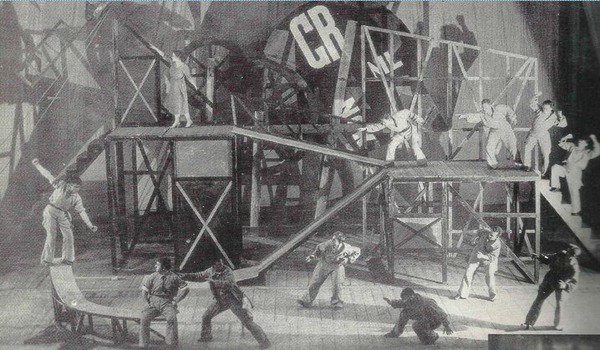 Performa and Garage Center for Contemporary Culture present a major new collaborative project entitled 33 Fragments of Russian Performance as part of Performa 11, the fourth edition of the new visual art performance biennial in New York City (November 1–21), on view November 2–23, 2011.
The exhibition will include performance archives, photographs, and videos documenting Russian performance in both the historical avant-garde of the 1920s and contemporary periods. Presented at the Performa Hub and curated by Garage curator Yulia Aksenova in collaboration with Performa Founding Director and Curator RoseLee Goldberg, the exhibition will also include a lecture by renowned Russian art critic Alexandra Obukhova and a performance by Andrey Kuzkin.

33 Fragments will explore the rich tradition of performance in Russia and its development during the 20th and 21st centuries. Performance art, or ʻliveʼ art, emerged strongly in the Russian art scene of the 1960s, although performance was popular in the projects of the avant-garde at the beginning of the 20th century. The avant-garde artists of the 1920s were pioneers who created entirely new means for articulating ideas to reach the mass public emancipated by the revolution. Using experimental techniques and mixing genres, they sought to release their works from the constraints of traditional, established artistic media, focusing instead on their bodies within time and space.

Presenting Russian performance in all its diversity, the exhibition demonstrates the integral role it has played in the countryʼs artistic development and the crucial means for freedom of speech it has offered in a century marked by political repression and censorship. Performance in Russia became an essential vehicle for engaging with a multitude of discourses in art, politics and society at the most critical moments in Russian history. This has persisted into the 21st century as a new generation of performance artists continues to tackle issues at the core of contemporary Russian society.

As one of the biennialʼs historical themes, centering on Russian Constructivism, Performa 11 will present a series of seminars, workshops and conferences which contemplates the early 20th century Russian avant-garde and considers its power and continuing relevance. 33 Fragments also marks a continued partnership between Performa and Garage which began with the third installment of the exhibition 100 Years of Performance, curated by RoseLee Goldberg and Klaus Biesenbach, and presented at Garage in Moscow in 2010.

Roselee Goldberg, Founding Director & Curator, Performa
RoseLee Goldberg, Founding Director and Curator of Performa, is an art historian, critic, and curator whose book Performance Art: From Futurism to the Present, first published in 1979, pioneered the study of performance art. Former Director of the Royal College of Art Gallery in London and Curator at The Kitchen in New York, she is also the author of Performance: Live Art Since 1960 (1998) and Laurie Anderson (2000), and is a frequent contributor to Artforum and other publications. Recent awards and grants include two awards from the International Association of Art Critics (2011), the Agnes Gund Curatorial Award from Independent Curators International (2010), Curatorial Research Fellowship from the Warhol Foundation (2008), and Chevalier of the Order of Arts and Letters from the French Government (2006). In 2004, she founded Performa, a non profit arts organization committed to the research, development, and presentation of performance by visual artists from around the world, and launched New Yorkʼs first performance biennial, Performa 05 (2005), followed by Performa 07 (2007), and Performa 09 (2009). In 2011, Performa will present its fourth biennial, Performa 11 (November 1–21, 2011). Goldberg has taught at New York University since 1987.

Performa 11, the fourth edition of the internationally acclaimed biennial of new visual art performance presented by Performa, will be held in New York City from November 1–21, 2011. The three-week biennial will showcase new work by more than 100 of the most exciting artists working today, in an innovative program breaking down the boundaries between visual art, music, dance, poetry, fashion, architecture, graphic design, and the culinary arts. Presented in collaboration with a consortium of more than 50 arts institutions and 25 curators, as well as a network of public spaces and private venues across the city, Performa 11 will ignite New York City with energy and ideas, acting as a vital “think tank” linking minds across the five boroughs and bringing audiences together for brilliant new performances in all disciplines.

Founded in 2004 by art historian and curator RoseLee Goldberg, Performa is the leading organization dedicated to exploring the critical role of live performance in the history of twentieth-century art and to encouraging new directions in performance for the twenty- first century. Performa launched New Yorkʼs first performance biennial, Performa 05, in 2005, followed by Performa 07 (2007), and Performa 09 (2009).

Garage Center for Contemporary Culture is a major non-profit international arts space based in Moscow, dedicated to exploring and developing contemporary culture, which opened in 2008. There are two distinct areas of programming - to bring important international modern and contemporary art and culture to Moscow and to raise the profile of Russian contemporary culture and encourage a new generation of Russian artists.
These are explored through a series of exhibitions ranging from major surveys of important collections to single artist retrospectives or group exhibitions. Garage also hosts a strong program of special on-site events, including talks, film screenings, workshops, performances and creative activities for children. Garageʼs space includes galleries, open exhibition areas, courtyard, cafe, kids space, purpose-built auditorium and media room, all designed by award winning architect Jamie Fobert.

Garage will be relocating from its current space – the former 20th century Bakhmetevsky Bus Garage – to a new site in a historic pavilion inside Gorky Park, Moscow. Opening to the public in 2012, the space will be developed to include international standard gallery spaces, open exhibition areas, childrenʼs creative spaces, education and learning facilities, a cafe and a shop. www.garageccc.com

Garage is a project of The Iris Foundation, founded by Daria Zhukova.