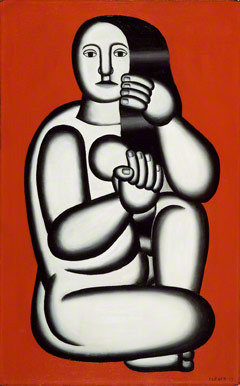 Modern Antiquity
Picasso, de Chirico, Leger, and Picabia in the Presence of the Antique

The alliance between the avant-garde and the antique constitutes an extraordinary episode in the history of European modernism.
Modern Antiquity: Picasso, de Chirico, Léger, and Picabia in the Presence of the Antique, on view at the Getty Villa from November 2, 2011 through January 16, 2012, focuses on how four eminent artists reinvented and transformed antiquity between 1906 and 1936.

Classicizing creations such as de Chirico's enigmatic piazzas, Picasso's post-cubist women, Léger's mechanized nudes, and Picabia's “transparencies” made the arts of antiquity modern. Following its showing at the Getty, the exhibition will be on view at the Musée Picasso, Antibes from February 16 to May 20, 2012. Juxtaposing twentieth-century works with ancient objects, this major international loan exhibition features works by Pablo Picasso (1881–1973), Giorgio de Chirico (1888–1978), Fernand Léger (1881–1955), and Francis Picabia (1879–1953) alongside ancient art drawn primarily from the Getty’s collection—continuing a dialogue between the modern and the antique that remains vital today. The Getty Villa and its antiquities collection provide a unique setting for this conversation to unfold and Modern Antiquity allows the visitor to experience modern art in relation to the classical past.

David Bomford, acting director of the J. Paul Getty Museum explains that “The idea of bringing the antique and the modern into contact captures the essence of the Getty Villa itself, which is less a fantasy of the ancient world than a modern museum that makes classical art relevant for today’s audiences.”

Christopher Green, professor emeritus at the Courtauld Institute of Art, London, and the exhibition's co-curator added, “Picasso, de Chirico, Léger, and Picabia all looked to classical antiquity to feed their imaginations, and yet remained radical figures in the history of twentieth-century art. These avant-garde artists had no wish to return to a lost past; the antiquity they knew, above all in museums, was for them a vital element of contemporary life.”

Exploring three thematic categories—stories/myths, bodies/figures, and objects/fragments—the exhibition sets distinct stages for the juxtaposition of modern art and ancient objects. According to Jens Daehner, associate curator of antiquities at the J. Paul Getty Museum and co-curator of the exhibition, “The ancient works were chosen because they evoke some of the aesthetic qualities of antiquity to which modern artists responded. As these artists have transformed antiquity in the twentieth-century, modernism also influenced how viewers today perceive classical art.”

The earliest modern works on display will be drawings after ancient sculpture made by Picasso as a teenager in the 1890s, followed by works from 1906, when he turned to Archaic Greek sculpture to help him reinvent the human figure. Between World War I and the mid- 1930s, a rich mixture of ancient art—including Pompeian wall paintings, Greek vase paintings, and classical sculptures—opened up new directions in his work as a figurative artist. Picasso never merely repeated sources, and he rarely allowed his art to suggest an affinity with a single style. In 1931 he illustrated Ovid’s Metamorphoses, but otherwise classical myth became a cast list of gods, heroes, monsters, and victims for him to draw on and transform in the visual telling of his own stories.

The exhibition centers on the 1910s and 1920s, presenting de Chirico’s and Picasso’s more coherent engagement with antique forms and imagery. Picasso’s simple, sensitively nuanced figure paintings contrast with a selection of de Chirico’s stark dream images from the period 1912-1919, which employ ancient fragments and types (notably in his “Ariadne” series) and where the antique is juxtaposed with isolated elements of modern experience such as steam locomotives or architecture.

Compared to these artists’ classicism, the selected works by Léger and Picabia present very different appropriations of antique motifs. After his cubist period, Léger mechanized the antique (often in the form of large female nudes), thus making it modern and progressive. Picabia, following his involvement with the Dada movement, ambiguously recycled well- known classical images in his “transparencies” of the late 1920s and early 1930s, in which human, animal, and plant forms are layered in superimposed outlines. Taken from various sources, these elements include ancient Roman sculptures, Pompeian frescoes, and Renaissance and Baroque paintings.

Léonce Rosenberg—who served as dealer to each of the artists in the show—was among the first to embrace Picabia’s new style and commissioned several transparency panels for a suite of “allegories” that were installed in Rosenberg’s Paris apartment in 1929. Displaying them in their original arrangement, Modern Antiquity reunites three of these panels for the first time since the apartment was dismantled eighty years ago. The latest works in the exhibition will be plates from two suites of prints: de Chirico’s Mythology lithographs, created in 1934 as illustrations for a text by Jean Cocteau, and the Vollard Suite (1933–37), in which Picasso merges classical mythology with his own artist myth. Altogether, there will be approximately fifty modern paintings and works on paper as well as two bronze sculptures. The more than a dozen ancient objects include Greek and Roman sculptures, Attic vases, a Fayum mummy portrait, and an Etruscan mirror.

Modern Antiquity: Picasso, de Chirico, Léger, and Picabia in the Presence of the Antique is organized by the J. Paul Getty Museum in association with the Musée Picasso, Antibes, and is supported by an indemnity from the Federal Council on the Arts and Humanities. The exhibition is co-curated by Christopher Green, professor emeritus, Courtauld Institute of Art, London, and Jens Daehner, associate curator of antiquities, J. Paul Getty Museum.