Live Cinema/Peripheral Stages. Turning the Lens to the Margins. Representative of a young generation of artists turning their attention toward contemporary society, Bourouissa's and Zielony's imagery builds on the traditions of both documentary and portraiture photography. By immersing themselves in the social reality of a situation or location, the two artists produce photographs and videos that deal with the peripheral condition in a direct and thought-provoking manner. 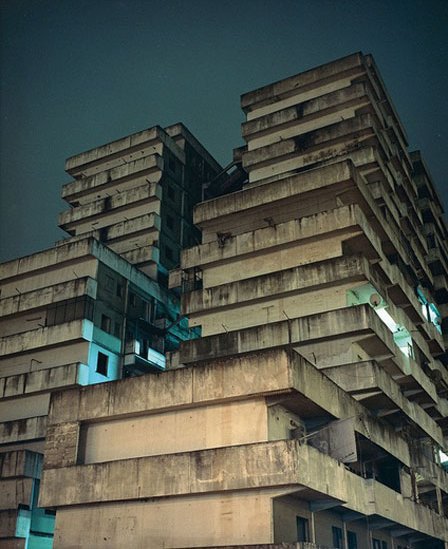 The works in Live Cinema/Peripheral Stages address the experience of marginality and question the social conditions—particularly those of twenty-first century cities—that generate and sustain it. Representative of a young generation of artists turning their attention toward contemporary society, Mohamed Bourouissa’s and Tobias Zielony’s imagery builds on the traditions of both documentary and portraiture photography. By immersing themselves in the social reality of a situation or location, the two artists produce photographs and videos that deal with the peripheral condition in a direct and thought-provoking manner.

Both artists work primarily as photographers, creating compositions that reveal, in critical yet poetic ways, the social tensions inherent in living within the periphery of contemporary society. Defined as the edge or outskirts of an urban area, the periphery has become synonymous with under-resourced geographical regions beleaguered by social and economic problems. By focusing their lenses on the marginalized class of young men and women of the urban fringes, the two artists bring to light the complexity of this group, which is often neglected or misrepresented by the mass media. In the resulting images, representation becomes a form of resistance.

With his Écrans (Screens) series of photographs, showing the smashed surfaces of television monitors, Mohamed Bourouissa refuses to conform to the common framing of recent events and current realities by challenging the mechanism by which images are distributed, turning that into an image in itself. In the video Temps mort (Time Out), he documents a year-long exchange via mobile telephones between him and a jailed acquaintance, restoring a sense of humanity to a marginal condition frequently unnoticed.

In Vele (Sails), Tobias Zielony expands his photographic exploration beyond portraits of marginal youths to the built environment they inhabit, not only to place them in their context, but also to challenge the more established narratives of violence and corruption associated with Scampia, a suburb of Naples, Italy. Known for its ties to organized crime, this particular locale and its decaying utopian structures become the focus of Zielony’s photographs and photo-animation, which capture the palpable uncertainty of life under such harsh circumstances.

Live Cinema is a series of exhibitions that explores the vast production of single-channel video and film work by a diverse group of local, national, and international artists. In the last decades an ever-increasing number of contemporary artists have appropriated these mediums as an artistic outlet, in a dialogue with the early video and Super 8 practices of the 1960s and the tradition of experimental filmmaking. Each program of the Live Cinema series focuses on a specific aspect of this work, in order to both map and analyze this important facet of contemporary art production. Certain Live Cinema programs are accompanied by a brochure in which guest writers discuss the works exhibited, and by public lectures given by the participating artists.

Mohamed Bourouissa
Exploring existing power relations and their inherent tensions, Mohamed Bourouissa’s work is based in photography but its contents are steeped in art historical painting and references. In his various photographic series, the artist blurs the line between documentary photography and fiction, either by carefully staging his compositions (Périphéries) or by delegating the photographic gaze to others (Temps mort). Born in Algeria in 1978, Bourouissa grew up in Paris. After attending École nationale supérieure des Arts Décoratifs, where he specialized in photography, he received his master’s degree from the Sorbonne, also in Paris, in 2004. Bourouissa has been featured in a number of solo shows internationally at and his work was also included in the 6th Berlin Biennale for Contemporary Art (2010), The Generational: Younger than Jesus in 2009 at the New Museum, New York, and in ILLUMInation at the 54th Venice Biennial (2011), among other exhibitions.

Tobias Zielony
Documenting the lives of teenagers living on the fringes of urban environments, Tobias Zielony investigates youth culture of the marginal spaces of society. The relationship between people and location is at once specific to these places and yet resonates with other similar nondescript spaces around the world, indicating the presence of a globalization that has become the norm. Zielony’s interest is not only in the people who live in these places but in the architectural and urban context of these locations that exist as indicators of embedded political and economic structures. Born in Wuppertal, Germany, in 1973, Zielony studied documentary photography at the University of Wales, and art photography at the HGB Academy of Visual Arts in Leipzig. Since 2004 he has been featured in a number of solo exhibitions and his work has been included in group exhibitions such as the 7th International Biennial of Photography and Visual Arts (2010) in Liège, Belgium; Morality Act 1 at Witte de With, Rotterdam, Netherlands, in 2009–10; and Populism at the Stedelijk Museum, Amsterdam, in 2005-06.