Bursts of Light and Rifts of Darkness: this show, drawn from a private collection, will include paintings and drawings by Adolph Gottlieb, Clyfford Still, Arshile Gorky, Mark Rothko, and Willem De Kooning, five of the central figures of abstract expressionism. A Private Eye, Revisited: in celebration of the opening of the wing, this exhibition will feature some of the best works from the Brandt Collection's collection of drawings, from the 16th century to the present. 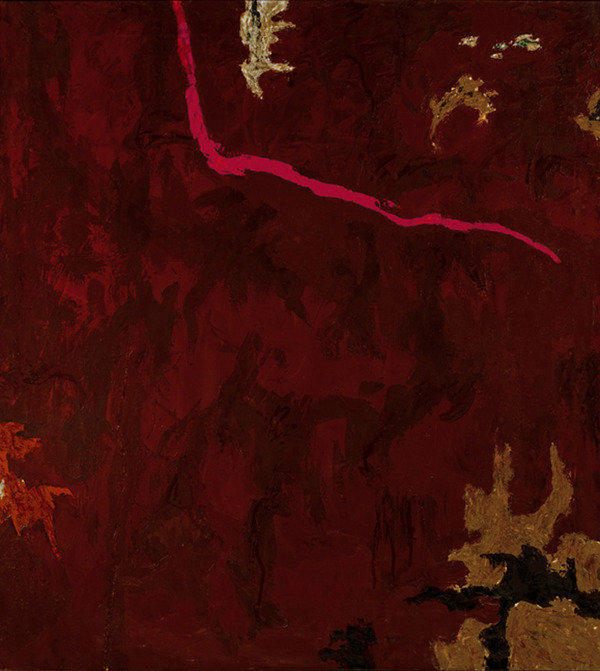 It is only fitting that the inaugural show in the Johnson Museum's new gallery for contemporary art should be drawn from the collection of Cornell Board of Trustees Chairman Peter Meinig, Class of 1961, and his wife Nancy, Class of 1962, who have already done so much for Cornell University and will continue to be an intricate part of its history, as they will lead the University's efforts to celebrate its sesquicentennial in 2015.

Bursts of Light and Rifts of Darkness focuses on works by five of the central figures of abstract expressionism, Adolph Gottlieb, Clyfford Still, Arshile Gorky, Mark Rothko, and Willem de Kooning. Although the styles and approaches to painting varied considerably among the artists of abstract expressionism, this first specifically American movement can be broadly described by abstract forms, expressive brushwork, and monumental scale, with an all-over composition that doesn't have any one privileged focus. Products of their time and place—New York after World War II—the abstract expressionists wanted to express their mental and emotional states through their paintings. Harold Rosenberg, one of several influential art critics to champion the movement in the 1940s and '50s, spoke of abstract expressionist paintings no longer as windows on the world but as fields for action: "At a certain moment the canvas began to appear to one American painter after another as an arena in which to act. What was to go on the canvas was not a picture but an event." Thus a new generation of American artists began to emerge who were referred to interchangeably as action painters or abstract expressionists, and who would influence future art movements that were either in direct response to or reaction against their own.

The drawings by Mark Rothko and Willem de Kooning and the painting by Arshile Gorky included here clearly show the influence of European modernist movements, such as expressionism, surrealism, and cubism, that had been brought to the United States by the many artists that fled the rise of Nazism in Europe before and during WWII. But it is in the large-scale paintings by Adolph Gottlieb and Clyfford Still that we can witness the energy and push-and-pull that abstract expressionism is characterized by. Gottlieb's painting Rising is a superb example of his well-known "Burst" paintings—often referred to as imaginary landscapes—that became his signature style beginning in the 1960s, where the top half of the painting is dominated by haloed discs that hover over the bottom half, composed of gestural splashes of black paint applied with a broad brush. It is particularly exciting to be able to include a very fine example of Clyfford Still's work in this exhibition, as, due to the artist's tight control over his work during his lifetime, the number of Stills in private and public collections is surprisingly small compared to that of other artists from the period. 1948 No. 1 (PH 320) is an early example of Still's signature style that often involves brooding fields of color becoming turbulent with flashes of energy, like the bolt of red cutting through the top half of this canvas.

Paintings from this period of American art represent a significant gap in the permanent collection of the Johnson Museum. We are therefore particularly grateful to Peter and Nancy Meinig for their generosity in lending these great works of art to share with the Cornell and Ithaca communities.

A Private Eye, Revisited
A Selection from the Brandt Collection

In 2006, the Johnson exhibited close to two hundred pieces from Dr. Arthur Brandt’s (Class of 1951) collection in A Private Eye: Dada, Surrealism, and More. The works were primarily from two related art historical movements: Dada and surrealism. A Private Eye, Revisited includes many of the best works from those movements in the Brandt collection to celebrate the opening of the Museum’s new wing.

Many consider Dada and surrealism world views or religions rather than art movements. Art historian David Sylvester noted in 1978 that

Dada and Surrealism are not art movements; they are not even literary movements with attendant artists. They are religions, with a view of the world, a code of behavior, a hatred of materialism, an ideal of man’s future state, a proselytizing spirit, a joy in membership of a community of the like-minded, a demand that the faithful must sacrifice other attachments, a hostility to art for art’s sake, a hope of transforming existence.

Works by Man Ray, Marcel Duchamp, Francis Picabia, Kurt Schwitters, and George Grosz illustrate the complexity and diffusion of the Dada movement, which sprang up in the neutral city of Zürich, largely as a response to the unprecedented human toll of World War I and spread after the war to Berlin, Paris, Hannover, and New York. The Dada artists blamed society’s supposedly rational forces of scientific and technological development for bringing European civilization to the brink of self-destruction. They responded with art that embraced anarchy and the irrational. Good examples of this attitude are Duchamp’s irreverent mustache on a reproduction of Leonardo’s Mona Lisa, Picabia’s images of people as machines, or Schwitters’s collages made from found objects. Wanting to change the world, Dada artists were not content to just produce objects in the studio; they put on public events that included elements of theater, dance, poetry, and music, anticipating many contemporary art–making methods and pioneering advertising techniques still in use today. According to its proponents, Dada was not art—it was “anti-art.”

Surrealism emerged around 1920, partially as an outgrowth of Dada. French writer André Breton was its principal theorist, publishing the Surrealist Manifesto in 1924. Advocating the liberation of the mind and ultimately the liberation of the individual and society, the surrealists sought to engage the imaginative faculties of the unconscious to attain a dreamlike state different from everyday reality, leading to a life of freedom, poetry, and uninhibited sexuality.

The works by Hans Bellmer represent the kind of provocative eroticism that surrealists thought was a challenge to tyranny and authority. Other well-known surrealist artists represented in A Private Eye, Revisited include Leonor Fini, Valentine Hugo, Kurt Seligmann, Yves Tanguy, and the American surrealist Leon Kelly.

All works are from the collection of David Ilya Brandt and Daria Brandt.

The Johnson Museum has a permanent collection of over 35,000 works of art from Africa, Asia, Australia, Europe, and the Americas. The museum building was designed by I. M. Pei. Funds for the building were donated by Cornell alumnus Herbert F. Johnson, late president and chairman of S C Johnson. The building opened in 1973.