This joint exhibition featuring the Californian Cameron Jamie and the Graz group G.R.A.M. continues a collaboration and artistic friendship that has lasted many years. With critical-analytical intentions they examine various extreme forms of society or else they present utopian, apocalyptic future visions and fantasies. 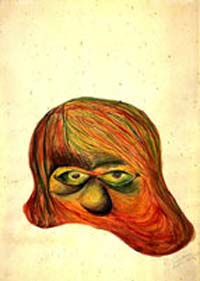 This joint exhibition featuring the Californian Cameron Jamie and the Graz group G.R.A.M. continues a collaboration and artistic friendship that has lasted many years.

With critical-analytical intentions they examine various extreme forms of society (child-wrestling, Halloween celebrations, haunted houses, demonic Austrian folk figures such as the Perchten and Krampus, or amateur TV); or else they present utopian, apocalyptic future visions and fantasies. The visual image immediately arouses in the viewer questions about the conditions under which such strange forms can arise within society.

Cameron Jamie comes from Los Angeles. Apart from collaborations with Mike Kelly and Paul MacCarthy, he has also worked with the Californian alternative metal band The Melvins. Most of the soundtracks for his videos derive from this band. In videos such as BB or Cypress, Jamie presents the subculture of youth in Los Angeles like a field researcher. In the dilapidated suburban slums of the Underground movement (white trash), young people meet for wrestling events. Working together with them over a period of years, the artist developed his film work into a documentary style. However, in contrast to pure documentation, he did not publish his many conversations and interviews with the young people.

Cameron Jamie will be presenting new works on paper, as well as a 6-part series of new photographs of Halloween ghost houses from Michigan, and Neotoma, a repulsive compilation of anonymous amateur videos, which shows the grotesque effects of the American entertainment culture.

In their latest photographic works, G.R.A.M. attempt to portray a possible stage of human development, one long before or after the present form of existence. In a sociotope that has not previously been discovered, there exist living creatures which practice strange forms of behaviour. Resembling human beings, the naked creatures live outdoors, although nothing is yet known of their exact strategies for survival. Direct contact with them has not yet been made. Apart from these present observations, which have been recorded in the form of photographs, there is no proof of their existence. The protagonists could be representatives of a sect-like group that has dropped out of civilisation. However the whole thing could also be a post-apocalyptic vision, a sudden possible glimpse into the future. The blurred b/w photographs, which remind one of some expedition undertaken long ago in history, make it difficult to place in time. The topographical context cannot be determined from the pictures.

G.R.A.M. are also planning to make a documentary film about these strange inhabitants of paradise, who are known as WiedergÃ¤nger. From the film records they expect to obtain further and more revealing information about this species. In this way they hope to be able to make a contribution to speculation about the future of human beings.