This presentation makes apparent once again that the artist is not only a pioneer of experimental film and cinema, but also the protagonist of a feminist, socially critical art. The exhibition offers the opportunity to rediscover new aspects of an internationally renowned artist, in addition, she is providing insights into her comprehensive archive that, to the present day, remains inaccessible to the broad public. Many of her main works are placed in the context of their genesis by means of preparatory conceptional drawings, statements, and collages, as well as photos. 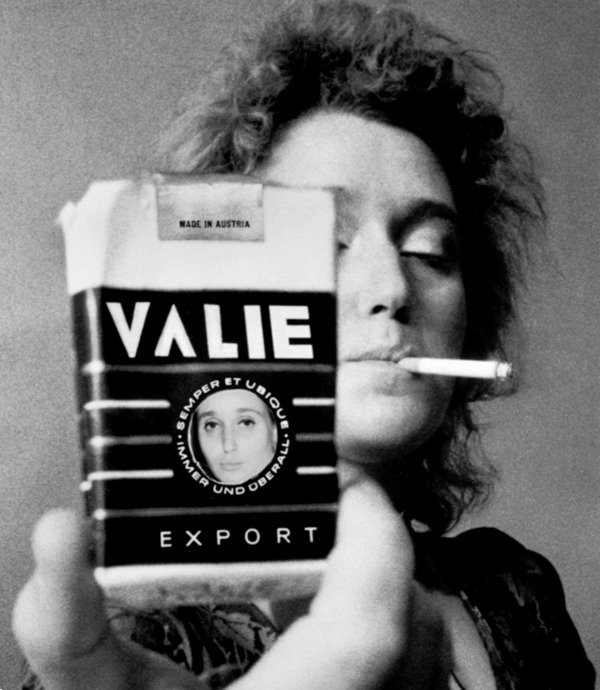 The exhibition, VALIE EXPORT / Archive, provides the opportunity to rediscover new aspects of an internationally renowned artist whose works are counted among the canon of 20th century art history and represented in many important museum collections. In this unusual and surprising presentation at the Kunsthaus Bregenz, in part, works that hitherto have not been exhibited will be on show.

In addition, for the first time in her long history of exhibitions, VALIE EXPORT is providing insights into her comprehensive archive that, to the present day, remains inaccessible to the broad public.

This presentation makes apparent once again that VALIE EXPORT is not only a pioneer of experimental film and cinema, but also the protagonist of a feminist, socially critical art. Apart from that, her projects and texts provide evidence that she has a decisive influence to the present day, not only as an artist, but also as a curator and theorist. Only a few have questioned the conditions and possibilities of the (technical) media, their relation to the (female) body and to society with a comparable intensity and stringency.

Deploying her own body which, in a certain way, came toward viewers in flesh and blood, VALIE EXPORT polarized the public. She sensitized it to questions reflecting upon institutions and gender-specificity which, at this time, were only inadequately articulated in a discourse dominated by men.

For a long time in Austria, the work of VALIE EXPORT did not gain the attention it deserves, as measured against its international significance. This changed in 2010 with the large comprehensive exhibition at the Belvedere in Vienna and the Lentos Art Museum in Linz.

In contrast to this retrospective, the presentation at the KUB will concentrate mainly on the artist’s archive. Her most important works, such as TAPP und TASTKINO, Aktionshose: Genitalpanik and BODY SIGN ACTION, will not simply be presented separately as autonomous pieces, but in conjunction with the reference materials relevant for their making. For her films, for instance, VALIE EXPORT not only wrote visual scripts but also made drawings and Polaroids. Display cabinets in a display conceived by Kuehn Malvezzi together with the artist bring together photos of the film-shooting, posters, scripts as well as reviews of the individual feature films. This diversity illustrates the complex process of their making and reception. In this sense, in Bregenz many of VALIE EXPORT’s main works will be placed in the context of their genesis by means of preparatory conceptional drawings, statements, and collages, as well as photos.

In 57 large cabinets, in which VALIE EXPORT has together with Yilmaz Dziewior arranged materials from her archive according to works and themes, a panorama is unfolded that not only lays out the artist’s multifaceted core oeuvre, but also provides an eloquent account of experimental art from the 1970s through correspondence, newspaper clips, and texts.

For instance, in 1971, some of the protagonists of this art, including Günter Brus, Robert Filliou, Birgit and Wilhelm Hein, Arnulf Rainer, and Carolee Schneemann, invited VALIE EXPORT to participate in a book project with the title Acta Occidentia Scientia which, however, was only published in the 1990s. In Bregenz this project will be presented not only in the form of a finished book, but also through an extensive file of materials as well as in detail with letters from Yvonne Rainer and Michael Snow. A similar procedure will be followed at the KUB with the publication and exhibition, MAGNA — Feminism: Art and Creativity, that was conceived at the same time by VALIE EXPORT. In retrospect, the ‘Who’s Who’ of feminist art took part in this project. Apart from files of materials, correspondence between VALIE EXPORT, Maria Lassnig, and Meret Oppenheim is on show in the associated cabinet.

The treasures of the archive that have never been shown to date include also an extensive collection of beer coasters, cigarette packs, newspaper articles and other memorabilia on which the word ‘Export’ can be read. The artist has been collecting them since the start of her career, when she adopted the artist’s pseudonym, VALIE EXPORT. For the first time, together with two documentary photos, the work Sommerjacke from 1973 will also be presented, in which dried grass and paper are sewn into the seams.

Dramaturgically, the exhibition is conceived in such a way that it intentionally thematizes temporal leaps. After the first floor shows the display cabinets for the archive, on the second floor, the work, Fragmente der Bilder einer Berührung — done already 17 years ago in Bregenz for her solo exhibition in Magazin4 — will be presented in an arrangement especially conceived for the KUB. On this floor there are further re-encounters when visitors come upon photographs and installations whose phases of making and contexts of reception they were able to discover a short time before in the archive display cabinets. For instance, whereas in two archive cabinets the original jeans, a poster print and a small photo print of the legendary Aktionshose: Genitalpanik are exhibited, on the floor above the large photograph of the same work mounted on aluminium is on show as an autonomous work. It is similar with the so-called Körperkonfigurationen and the various cycles of conceptual photography that are shown in detail in their different stages on both floors.

TAPP und TASTKINO can also be viewed in a unique complexity. In addition to the scandalizing press reactions, the action is presented also as a work with photographs, film documentation and the authorized reproductions of the original objects. The new works that VALIE EXPORT has realized for her Bregenz exhibition on the basis, or as a further development, of material that she discovered while going through her archive should be especially mentioned.

On the top floor, a downright ‘film forest’ is presented with more than twenty works in various media and presentation formats. Here, for example, video and film installations are to be found, such as the early trailblazing media analyses, Splitscreen – Solipsism (1968), Split Reality (1970) and Adjungierte Dislokationen (1973). The large, uniform room is structured by a multitude of screens. 16 mm films such as ... Remote ... Remote... (1973) and Syntagma (1983) are projected here in their original format. Other films have been, or already were, converted for DVD, such as Ein perfektes Paar oder die Unzucht wechselt ihre Haut (1986), or were already conceived for digital technology. Additional works from VALIE EXPORT’s various phases of development are shown on monitors and, together with the other (moving) images, form a total presentation that illustrates the enormous range in both content and media of this significant artist.

VALIE EXPORT
Archive
In a revolutionary way, starting in 1968, the Austrian artist VALIE EXPORT pioneered the way for feminist and socially critical art. The exhibition, VALIE EXPORT / Archive, at the Kunsthaus Bregenz presents the artist’s work in conjunction with her extensive archive. Works such as TAPP und TASTKINO and Aktionshose: Genitalpanik are shown not only as autonomous works, but also within the context of reference material from the archive. This includes newspaper articles and sketches, film scripts and Polaroids, collages and conceptional drawings.

The catalogue book appearing along with the comprehensive exhibition at the Kunsthaus Bregenz is conceived as a critical engagement with the work and the subject of archive. The publication contains essays by Yilmaz Dziewior, Jürgen Thaler, and Astrid Wege. With numerous reproductions from the artist’s archive, the publication also documents VALIE EXPORT’s way of working with which she approaches and engages with a theme.

Partner and Sponsors
The Kunsthaus Bregenz would like to thank its partners for their generous financial support and the cultural commitment that goes along with it.