Two person-exhibition of new sculpture. The installations address strategies of empowerment and historical engagement with governmental as well as geographical centers of power. 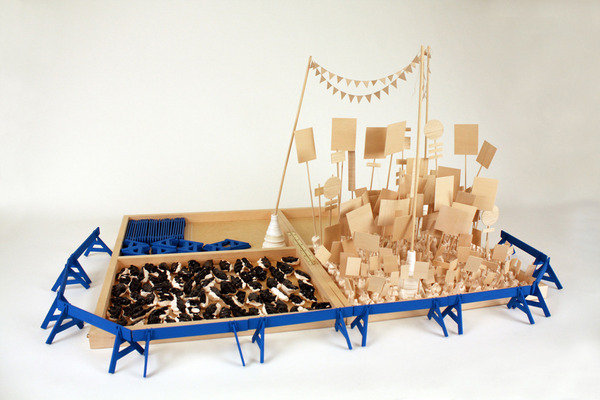 Anna Kustera Gallery is proud to present a two-person exhibition of new sculpture by Gregory Green "Through the Night Softly" and Andrew Cornell Robinson "Disobedience". Both installations address strategies of empowerment and historical engagement with governmental as well as geographical centers of power.

Green's frequently incendiary sculptural statements are as absorbing as they are alarming. His previous effigies of bombs evoke contemporary terrorism and have had a way of making a variety of authorities uncomfortable, especially in our post-9/11 world. For the operatic Through the Night Softly, the artist takes aim at the mechanics of political leadership and aesthetic interrogation. His collection of 2,552 metal tire spikes, each hand-crafted and scattered in an almost topographical mass, resembles a child's game of jacks--albeit a functionally lethal one, along with its presence as an ominous, impenetrable barrier that dares one to cross. Through the Night Softly was recently shown at Regina Rex, an artist run space in Ridgewood, Queens.

Robinson contributes a universal, miniature activism "kit" that is actively staged in the window gallery as well as several peculiar ceramic trophies which seem to celebrate less-than-momentous events or accomplishments. Derived from his investigation of Jean Marat and Erich Fromm's meditation "On Disobedience," the mixed media sculpture presents placards that are blank but nonetheless convey urgency and indignant passions. The protestors themselves are formed from impressions of clay clenched in the artist's fist, effectively embodying a collective, largely suppressed discontentWith over 30 one-person exhibitions and numerous group exhibitions, Gregory Green has played a significant role in the contemporary art discourse of the last 20 years. He attended undergraduate school at the Art Academy of Cincinnati and graduate school at the School of the Art Institute of Chicago. His work is included in major public and private collections, including the Museum of Contemporary Art, LA; the Tate Gallery, London; the Saatchi Gallery, London; the Museum of Modern Art, NY; the Whitney Museum of American Art, NY; the Mori Museum in Tokyo and MAMCO, Geneva, among others. Green currently lives in Tampa, Florida, and teaches at the University of South Florida.

Andrew Cornell Robinson's work includes ceramics, mixed media sculpture and work on paper that often bridges eccentric, socio-political content with craft and assemblage materials. He is the principle of The arts crafts research Studio; a multi-disciplinary atelier where he works on both independent and collaborative projects with curators, designers and artisans. Robinson received his BFA in 1991 from the Maryland Institute College of Art and his MFA in 1994 from the School of Visual Arts in New York City. He has received awards from Cannes for his digital media work and fellowships from The Edward Albee Foundation in 2010. He lives and works in Brooklyn, NY, and teaches art and design at Parsons The New School for Design.