Notes From Paris. Bringing together stories and History, this exhibition revolves around the merging of scientific facts, fiction, politics and rumors through works playing with a wide range of narrative modes and levels. 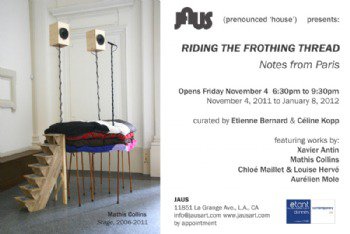 JAUS is very pleased to present the group exhibition Riding the Frothing Thread: Notes From Paris curated by Etienne Bernard & Celine Kopp featuring works by a group of young French artists in their first appearance in Los Angeles.

In this fascinating time when all eyes are turned to L.A. and its attempt to write its own post-war Art History, what is there to add and what kind of curatorial project can be proposed in such an extraordinary context? One can only repeat how influential and fascinating the city has been for European intellectuals over the years and how relevant some of the experiments led in LA are for young international artists today. More than anything, it is interesting to reflect on the mechanism behind the records, the selections, the omissions, and the writings of past events. While the importance and history of local artist run spaces is being widely commented upon, JAUS' invitation to bring French artists in LA shows how active the network of alternative spaces currently is in creating links between LA and elsewhere.

Bringing together stories and History, this exhibition revolves around the merging of scientific facts, fiction, politics and rumors through works playing with a wide range of narrative modes and levels. In a city that has been described as a 'Slide Area', new ways of approaching historical research have to be invented, without the excavation of authoritarian roots, linear chronology, and away from a comparison between center and periphery. Gavin Lambert famously said about Los Angeles that 'people should be careful and not live too close to the edge'. For this European writing about lives in Southern California, the sun, the ocean's froth, and the pacific palisades all seem to lead people to a general nervous breakdown. The works gathered in this exhibition presents stories where digressions are a way to make sense, and where cork bottle stoppers resembling Daumier's caricatures go on a mysterious political campaign in the bars all over the city. Present, future, art historical references, gossip and man-bites-dog events come side by side with scientific facts and manual instructions. There are no more lines to follow or roots to dig, just froth and a melting artwork.

This exhibition is made possible through the kind support of Etant donnes: The French-American Fund for Contemporary Art provided by FACE (French American Cultural Exchange).