I don't like to look at him, jack. It makes me think of that awful day on the island. These nine paintings are grouped into two series of work: one comprising three portraits of King Kong; and the other six meditations on a passage from the memoirs of the ornithologist John James Audubon (1785- 1851). 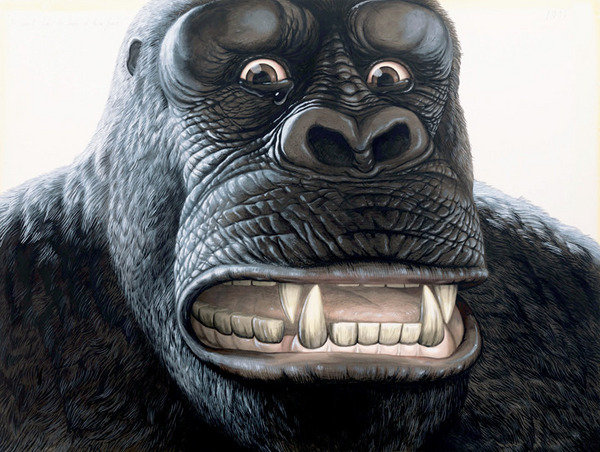 Paul Kasmin Gallery is pleased to present an exhibition of nine new, large-scale watercolor paintings by Walton Ford, on view for the first time, at 293 Tenth Avenue. The most monumental watercolors that Ford has painted to date, three of the works measure approximately 9 x 12 feet on a single sheet of paper.

These nine paintings are grouped into two series of work: one comprising three portraits of King Kong; and the other six meditations on a passage from the memoirs of the ornithologist John James Audubon (1785- 1851). Both series were painted in 2011, and are consistent with Ford’s practice of expanding the visual language and narrative scope of traditional natural history painting.

The first series, presenting three huge portraits of King Kong, is based on the 1933 movie co-directed by Merian C. Cooper and Ernest B. Schoedsack. As Ford explains, “The depression era Kong was misshapen, not modeled on any living ape. He has an odd, ugly, shifting charisma like Cagney, Edward G. Robinson, or Bogart. Naturally, his woman screamed in terror. She continued screaming throughout their time together. The grief of the original Kong is the grief of the unloved, and like Humbert Humbert or Frankenstein, the grief of the unlovable. In 1933, Fay Wray says words that would break any suitor's heart. She shrinks from the chained Kong and tells her human lover, ‘I don't like to look at him...’ Since Kong is a Hollywood tough guy, he covers up his heartbreak with violence and anger. These paintings are about Kong's heartbreak. I wanted to reveal the monster's grief, his enormous sadness, the sorrow that the original Kong kept hidden from view.”

Ford’s second series, which depicts a monkey capturing and strangling a parrot, was inspired by an unsettling passage from Audobon’s memoirs. Describing a childhood memory, Audobon writes: “…My mother had several beautiful parrots and some monkeys; one of the latter was a full-grown male of a very large species. One morning, while the servants were engaged in arranging the room I was in, ‘Pretty Polly’ was asking for her breakfast as usual, ‘Du pain au lait pour le perroquet Mignonne,’ the man of the woods probably thought the bird presuming upon his rights in the scale of nature; be this as it may, he certainly showed his supremacy in strength over the denizen of the air, for, walking deliberately and uprightly toward the poor bird, he at once killed it, with unnatural composure. The sensations of my infant heart at this cruel sight were agony to me. I prayed the servant to beat the monkey, but he, who for some reason preferred the monkey to the parrot, refused. I uttered long and piercing cries, my mother rushed into the room, I was tranquillized, the monkey was forever afterward chained, and Mignonne buried with all the pomp of a cherished lost one. This made, as I have said, a very deep impression on my youthful mind.”

Life-sized and impeccably detailed, Ford’s watercolors connote an old-master style, reminiscent of nineteenth-century artists’ portrayals of nature and animals. With exceptional accuracy, the paintings convey the artist’s art-historical and scientific knowledge, while also suggesting analogies between the past and the present day. They illuminate the strange, savage moments that occur at the intersection of human culture and the natural world. While human figures rarely appear in Ford’s paintings, their presence is always implied. Although monkeys, parrots and King Kong are the protagonists of the paintings, they exist only in the context of stories created and controlled by human beings.

Walton Ford was born in Larchmont, New York in 1960, and lives and works in Great Barrington, Massachusetts. His work is included in a number of collections, including the Smithsonian American Art Museum and the Whitney Museum of American Art. A survey of Ford’s work was organized by the Brooklyn Museum in New York in 2006 and traveled to the San Antonio Museum of Art in Texas and the Norton Museum of Art in Florida in 2007. Last year, Ford’s midcareer retrospective traveled from the Hamburger Bahnhof Museum Fur Gegenwart in Berlin (January 23–May 24, 2010), to the Albertina in Vienna (June 8–October 3rd, 2010), and to the Louisiana Museum of Modern Art in Denmark (November 12, 2010 March 6, 2011). Taschen books has issued three editions of his large-format monograph, Pancha Tantra.