Starting from Carroll's original manuscript, a comprehensive historical exploration of how the stories have influenced the visual arts, providing insight into the creation of the novels, the adoption of the text as an inspiration for artists and the revision of its key themes by artists up to the present day. 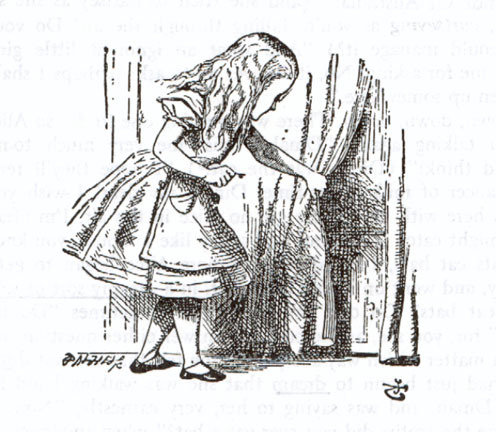 With Support from Liverpool City Council, the National Lottery through Arts Council England, Liverpool and Sefton Health Partnership Limited and the Embassy of the Kingdom of the Netherlands. Media Partner: The Times.

Lewis Carroll’s timeless novels, Alice’s Adventures in Wonderland and Through the Looking-Glass, have fascinated and inspired many generations of artists since the first novel was published over 150 years ago. Alice in Wonderland at Tate Liverpool is the first exhibition to provide a comprehensive historical exploration of how the stories have influenced the visual arts, providing insight into the creation of the novels, the adoption of the text as an inspiration for artists and the revision of its key themes by artists up to the present day.

The starting point for the exhibition is Carroll’s original manuscript, given to the twelve year old Alice Liddell as a Christmas present in 1864. Carroll’s own illustrations in the manuscript, and the famous illustrations by Sir John Tenniel in the first published edition, indicate that images were an integral part of the story, creating a visual world which took on a life of its own. Carroll was very much part of the art scene of his day: a photographer and art connoisseur, he mixed in artistic circles and counted artists such as Dante Gabriel Rossetti and Sir John Everett Millais amongst his friends. Work by Rossetti and Millais will feature, alongside paintings by William Holman Hunt and Arthur Hughes, referenced in Carroll’s diaries. There will be a rare opportunity to view Carroll’s own drawings, photographs and photographic equipment, alongside Victorian Alice memorabilia, documents from early stage adaptations, and original drawings by Sir John Tenniel.

Carroll’s stories were soon adopted by artists, both inspiring and providing an expression for themes within their work. Surrealist artists from the 1930s onwards were drawn towards this fantastical world where natural laws were suspended. There will be the opportunity to see Salvador Dalí’s series of twelve Alice in Wonderland illustrations and work by Max Ernst, René Magritte and Dorothea Tanning. The British Surrealists, dubbed ‘the children of Alice,’ will be examined, with key pieces from Paul Nash, Roland Penrose, Conroy Maddox and F.E. McWilliam.

From the 1960s through the 1970s, conceptual artists took Alice as foil for exploring our relationship to perception and reality, and the stories inspired responses in both Pop and Psychedelic art. This section will bring together work by Mel Bochner, Jan Dibbets, Dan Graham, Yayoi Kusama, Adrian Piper, and Marcel Broodthaers amongst others to highlight the era’s responses to the novel as it reached its centenary. Mel Bochner will reprise his seminal 1969 work Measurement: Perimeter in the Wolfson Gallery. The work displays the exact measurements of the room, with a unique 'Alice' twist, giving the viewer a new perspective of the scale of their surroundings. The artist has entitled the piece Measurement: Eye-level Perimeter (Ask Alice) 1969/2011 especially for the exhibition.

Contemporary artists continue to take inspiration from the books, exploring ideas such as the journey from childhood to adulthood; language, meaning and nonsense; scale and perspective; and perception and reality. The photography of Anna Gaskell, alongside more recent pieces by AA Bronson, Joseph Grigely, Torsten Lauschmann, Jimmy Robert and Annelies Štrba demonstrate how the continuous revision of the form and themes within Carroll’s novels have preserved their artistic relevance.

The exhibition will tour to MART - the Museum of Modern and Contemporary Art in Trento and Rovereto, Italy from 25 February - 3 June 2012 and Kunsthalle Hamburg, Germany from 15 June - 30 September 2012.