In the exhibition artistic positions that address the topic of living environment in a 'documentary' way are presented. Individual persons, their living conditions, their social environment and background as well as their personal fantasies, reflections and utopias form the focus of this exploration. 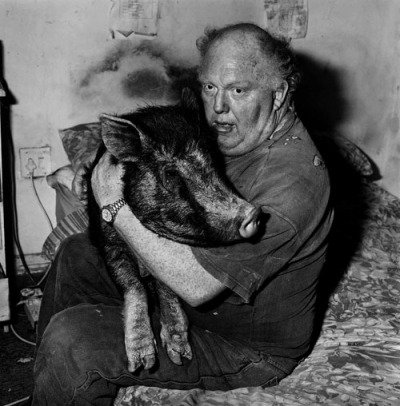 In the exhibition REAL, artistic positions that address the topic of living environment in a “documentary” way are presented. Individual persons, their living conditions, their social environment and background as well as their personal fantasies, reflections and utopias form the focus of this exploration. In the individual works it is about personal spaces of memory, such as the home and socially precarious places suggesting social systems and phenomena, or staged and virtual fantasy worlds. The objective depiction of reality is raised to a new level through both the exemplary, abstract and fragmentary reconstruction of living environments and the strong emotional aspect originating from the artists. The suggestive power of spaces is unleashed in the newly staged and reconstructed realities in these photographs.

Roger Ballen (New York/SA) who is known for his series of white misfits, sees his photographs as a psychological inquiry into the own self. In both series Outland (2001) and Shadow Chamber (2005) being presented at the Fotogalerie Wien, his fascination with things grotesque and abysmal come to light. In search of that which is hidden, he puts people, animals and/or objects into surreal, and at the same time, very emotional constellations and thereby stages situations in space that have a deep psychological effect. With his choice to use black and white photography, Ballen attains a further abstraction of reality.

The artist Ilse Chlan (Vienna) produced in collaboration with the radio journalist Elise Penzias (Vienna) a three-channel video, utopie freiheit:privat (2005) about the “Stadt des Kindes”, a building complex built at the end of the 1970s as a home for youth and children at Vienna city limits by architect Anton Schweighofer. This innovative, democratic institution with an anti-authoritarian approach to raising children and a space based on a model of living areas opening up to the environment was permanently closed in 2002 and was consequently for the most part torn down: freedom – a utopia? This place serves as the projection surface for social change. With “accelerated steps”, two cameras film the two empty houses of the former children’s home. Only fleeting glances show the traces of former residents. Another video gives the “decelerated view” of former residents, social workers, educators and the architect, who are given the chance to have their say.

Stefan Feiner (Vienna) shows staged photographs of architecture in Termination I-VI (2011). The memories of his childhood home that was lost after his parents’ separation serve as the point of departure for this work. He (re)constructs these spaces as models, recognizable as spaces of his memories in their simplicity and incompleteness. He then photographs the models. It is not his intent to realistically render the spaces, but rather an attempt to objectify his memories. The depicted situations are at the heart of the upsetting events. The short and concise titles provide information about the events that have taken place in the image, for example, an incident with his mother as she searched his brother’s room for drugs: His room she turned upside down. This work, where past and present are joined together, is about affirmation and at the same time about the repression of memory, about distance and intimacy, about returning home and fleeing.

In his film They, Karl-Heinz Klopf (Vienna) explores the contradictory and often non-transparent structures of real processes. The film tells the story of an urban area in Liverpool that, as the result of shipyard closures, joblessness, emigration and real estate speculation, was transformed from a once bustling area into a ghost town and whose social infrastructure was destroyed. The people still in this area fight for the cohesion of their community and at the same time, they are in search of a new identity and better living conditions. They very accurately addresses this range of topics, while simultaneously developing its very own narration leading to abstraction.

Reiner Riedler’s (Vienna) photo series Fake Holidays deals with the idea of the artificially created vacation paradise as produced by the entertainment industry, a paradise in which experience and adventure is offered as a commodity. In these often very elaborately constructed worlds, reality and simulation, “real” and “fake” nature blend together to create hyperreal scenic landscapes. The results are artificial spaces, “stage-sets of happiness” that are “beautiful”, hazard-free and practical and, as the advertisements promises, often more “realistic” than reality itself. These worlds of make-believe reflect the media-induced longings and dreams of so many people. Instead of striving to realize one’s own ideas and fulfill one’s desires, the suggestions by the media are instantly consumed and lived as such.

As if it were a topological field research project, Eva Würdinger (Vienna) photographed the former juvenile courthouse that had existed since the 1920s in Vienna’s 3rd District. The courthouse was closed in 2003 despite protest, since with the closure, services specifically for youth would also no longer be provided. Eva Würdingers work Jugendgericht (2006) goes far beyond mere documentation. With great sensitivity, she captured the atmosphere of the empty spaces: The traces and spatial constructions refer to the youth and their lives that were shaped by boredom, surveillance and discipline, they refer to a governmental system and its structures of power as well as to the tristesse of the abandoned building. The graffiti of former inmates is what remains of their lives in images and symbols, as a kind of diary – the traces of a collective memory.

Petra Noll, on behalf of the collective