Theexhibition will be presenting art works connected to this year's special focus Text:Image / Image:Text which are concerned with these complex inter-relationships and their conditions at the same time three sub-topics: Transformation, Symbiosis and Inspiration. 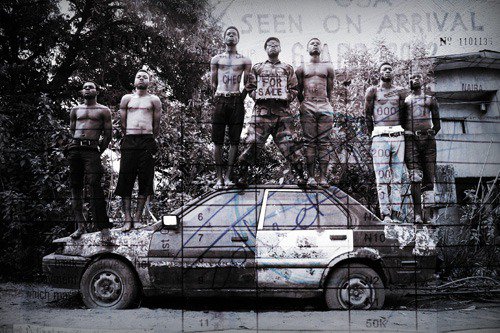 Humans have a multi-facetted apparatus at their disposal to express themselves. One of the very first means of articulation – the body – has been continuously supplemented (and in some areas replaced) by systems of symbols or images. In addition to images it has been (and is) language together with its graphic forms that provides the main structures of communication, agency and depiction. For that reason the semiotic analysis of the stimulating and exciting interrelationships of these two specific codings is a field that repeatedly surfaces in art. This is concerned with its social surroundings, special characteristics and own position within this nexus. The art works have to be continuously re-assessed in the light of their connections with questioning the media specifics within this context. The FOTOGALERIE WIEN will be presenting art works connected to this year’s special focus Text:Image / Image:Text which are concerned with these complex inter-relationships and their conditions at the same time as the curatorial collective guides the emphasis towards three sub-topics: Transformation, Symbiosis and Inspiration.

The connections between writing and images are something that accompanies us in our daily lives – countless pictures are communicated by means of, and commented in, the internet and other media. Or they populate public space. The characteristics and connotations of the systems – how they mutually determine or disrupt them – are intentionally employed or completely overlooked. As part of the special focus on Text:Image / Image:Text the FOTOGALERIE WIEN will be presenting the second exhibition as an interrogation of the symbiosis of this mutual reinforcement and melding and the resulting influences both in- and outside artworks. In addition to the numerous works in this international group exhibition in the mediums of photography, video and installation, special attention is being paid to the artists’ book as a format.

Edwin Fauthoux-Kresser’s variable wall installation, Instability of Phenomena, (2013) is constructed of both text and image material that links documentary archive material from the Technical University of Vienna and from his grandfather, a hydrologist, along with the artist’s subjective engagement with the subject of water. The historical photographs from the period where the Danube was regulated in and around Vienna – after 1870 – are accompanied by visual and textual commentaries to which Fauthoux-Kresser gives a local slant. Bringing together these two forms results in a poetisation and fictionalisation of the scientific and documentary material. This impression becomes particularly evident in the book of the same name about the work.

In the video work, Trickster (2014), Hanakam & Schuller create a catalogue of different archetypes of place, figure, artefact and action by playfully composing individual abstract elements. The changes of form create a narrative line that is based on a coherent, globally-intelligible design aesthetics. This is charged with and, at the same time, subjected to an irritation in the form of an overlay of historical expert terminology from the inventory catalogue of the National Gallery of Scotland. The recontextualisation of the written excerpts brings to the fore the specific form of reception along with its associated semiotics and, thereby, the relationship of linguistic and aesthetic knowledge.

With her installation, maybe it was u… (2015), Maria a Mäser is presenting various stations reflecting on the structures of visual experience and their embedding in linguistic systems and thus the influence they have on the viewers or their role in opening up the work itself. Starting out from adapted photographs and objects, the artist creates a visual frame of reference which she editorially supplements using various forms of textual content. Mäser takes soundtracks from various scientific areas and adds to them using the artist’s subjective experiential reports. Above all, the focus of the subject matter in the texts reflects on the relationship between recipient and what is to be viewed, its systems of meaning and the pictorial per se. This transforms visitors into an essential part of the work which is itself in a continuous process of self-analysis.

By mixing various narrative threads (images and soundtrack) in his video work, Valgrind (2013), Martin Nytra questions the anthropological image of humans, their relationship to each other and the objects that surround them. The adapted image and language material created by digital montage and their positioning and speed generates its own content and narrative rhythm. Moreover, the artist addresses collective memory with a selection of cinema film excerpts and pop culture references. This enrichment and the resulting influences of language on visual systems and / or their melding within the virtual application are made clear while at the same time being subjected to a self-referential questioning that examines the status of the image and its traditional perception in a digital age.

Wolfgang Plöger uses Google in order to search for words from different linguistic systems with the same meaning or image results and to then compare and contrast them. The resulting contents are collected in a book in the algorithmically determined order of the system being used: Iraq, Google Image Search, July 29 (2012) and, Google Image Search, June 14 (2012). The work, this is / Iraq (2012), is thus concerned with the different search results for the word Iraq, entered in both English and Arabic. In it, the immanent influence of this superordinate third-party system is foregrounded. The influence on users and its associated information generation is thus made clear.

In the digital photo collages, Deaf and Dumb Settlement versus Box Office (2013) by Chibuike Uzoma, textual and visual levels interlock and supplement one another both formally and with regard to content. The language of capitalist sales implicit in the images – For Sale – and the stamps of cashiers and banks lie like a transparent veil over the pictures and refer to current events in Nigeria. On the other hand, the excerpts from, and copies of, passports, court records and visa stamps refer back to the exemplary depictions of the people in the photographs who are representatives of a country exploited under colonial rule and a dictatorship, a people kept “deaf and dumb” that stand for rigidity. At the same time the references to travel documents suggest hope of movement, change and a life outside this “box”, one that allows a self-determined future.

In Arye Wachsmuth’s plus minus W.W.P.Y.B. >>> (We Will Push You Back) from 2013 the artist accentuates the process of charging signs with contextualised language and its historical anchoring. Here, the symbols “plus” and “minus” printed on historical stationery is a reference to the classificatory markings used by Nazi bureaucracy in euthanasia institutions. In this case the red cross is not – as it is today – a positive and humanitarian symbol, but was negatively connotated and associated with death while the blue “minus” signified a continued life. This historical configuration which is bound together with material, formal aspects and subject matter, frames copies of reports from present day national tabloids about Austrian asylum policies which are also printed on writing paper. Wachsmuth thus renders visible the consequential dangers of standardisation and defamation that can lead to arbitrary judgements.

Phillip Warnell’s film, Ming of Harlem (2014), is a mixture of very different narrative grammars. The basic structure is formed by the story of Antoine Yates, who lived for a number of years in a high-rise in Harlem together with his tiger (Ming) and his alligator (Al) until he was discovered which created a public outcry. The work brings together interview, factual report, documentation, subjective impressions and interpretation and reaches a climax in the reconstruction of events involving a copy of the original living situation in the Bronx Zoo. Along with a self-reflexive examination of film as a medium, the presence of the predators is used in order to integrate the philosophical considerations of Jean-Luc Nancy relating to the condition of the “wild interior”, animal names, foreign territories and the relationship of humans and animals.