Overview, Fundamentals, Performance, Transactions. Located at the intersection between image, performance, situation and writing, Chong's work continuously interrogates the many functions of the production of narratives in our everyday lives. 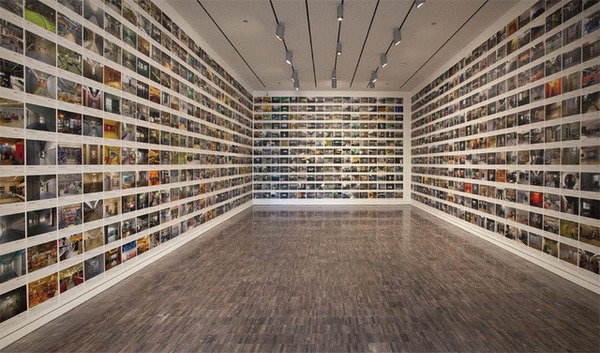 Wilkinson Gallery is pleased to announce Overview, Fundamentals, Performance, Transactions , the second exhibition by Singaporean artist Heman Chong at Wilkinson Gallery. Located at the intersection between image, performance, situation and writing, Chong’s work continuously interrogates the many functions of the production of narratives in our everyday lives.

This exhibition, which spans across the two floors in the gallery, contains a selection of work produced in the last six years. This allows for a subjective map of Chong’s work to surface, allowing a way to unpack the multiple connections between different works produced in various different contexts.

In the upper gallery lies a single work. Calendars (2020-2096) is a photographic installation that spans over 1,001 pages of a future calendars, one that begins in the year 2020. These haunting images, of publicly accessible spaces in Singapore devoid of humans, are gathered over a span of seven years (2004-10). The artist claims the work as both installation and photo-novel, blurring the boundaries between literature and art.

In an interview with Ahmad Mashadi, the artist states: ‘I would say that Calendars (2020-2096) locates itself within a conceptual framework of utilizing gestures, in this case, that of waiting and appropriating images within a specific moment, that moment of absolute emptiness, which can be quite rare considering how densely populated Singapore is. But at the same time, it has this dimension where I am also interested in formulating a kind of fictional landscape, one which reflects all the concerns of dystopic narratives, especially of the 'last man on earth' genre. This genre often deals with a global cataclysm which results in the near annihilation of the human race. Whether it is an ecological disaster or a full-blown biochemical infection, the stories usually become humanitarian; they are stories of how humans can survive the worst possible situations. So in a way, I am interested in staging the landscape in which these stories occur, and to use them as banal images for a banal activity, that of recording time.’In the lower gallery, a raised platform sits in the middle of the space. Carefully scattered on this platform are a series of objects including a number of books, paintings, sculptures, videos, and texts. They sit, and wait for the audience to be involved in looking at them, and in-between them. Of paintings of book covers. Of actual books. Of sculptures comprising of glass and books. Of videos that refuse to animate. Of short stories that refuse to be published.

Heman Chong (b. 1977) is an artist based in Singapore. He received his M.A. in Communication Art & Design from The Royal College of Art, London in 2002. In 2015, he has participated in numerous group exhibitions, including ‘expo zéro’ at Tate Modern, ‘Take me (I’m yours)’ at Monnaie de Paris, ’The Great Ephemeral’ at New Museum, ‘Time of Others’ at The National Museum of Art in Osaka, ‘When we share more than ever’ at Museum für Kunst und Gewerbe Hamburg, ‘Moves & Countermoves: On Sweat, Paper, and Porcelain’ at CCS Bard/Hessel Museum, 'Medium at Large' at Singapore Art Museum. He has participated in numerous international biennales including 10th Gwangju Biennale (2014), Asia Pacific Triennale 7 (2012), Performa 11 (2011), Momentum 6 (2011), Manifesta 8 (2010), 2nd Singapore Biennale (2008), SCAPE Christchurch Biennale (2006), Busan Biennale (2004), 10th India Triennale (2000) and represented Singapore in the 50th Venice Biennale (2003). In January 2016, a major solo exhibition of new works by Heman Chong will be staged at Rockbund Art Museum in Shanghai and is curated by its Senior Curator, Li Qi. A new monographic volume on Chong’s practice by M+ Chief Curator, Doryun Chong, is currently in progress in conjunction with his 2015 solo exhibition, ‘Never, A Dull Moment’ at Art Sonje Center, Seoul.