Melfies 2 is the second series to feature Eaton's 'mirror selfies'performative photos that blur his real life with a sort of self-deprecating social satire. 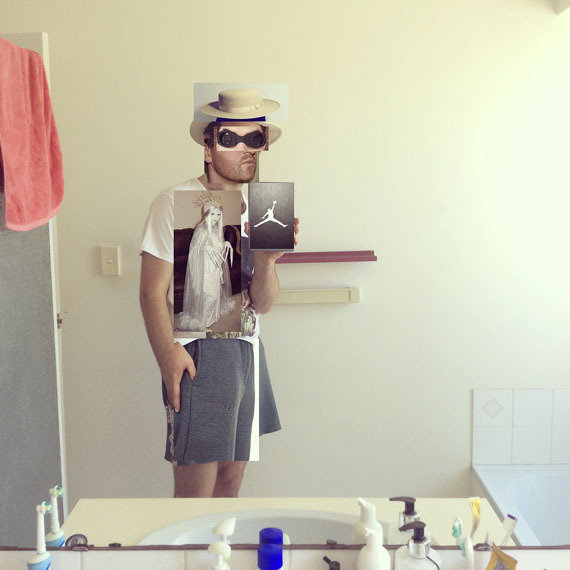 Originally exhibited via Instagram, the smart-phone app for sharing images, Jackson Eaton’s Melfies 2 explores a deep irony of the digitally networked era. The latest digital tools and media platforms may enable our attempts at self-expression, but the streams of selfies they spew out instead reveal the opposite. Instagram makes instantly apparent, Eaton notes, “the failure to express individuality in social media”.

Melfies 2 is the second series to feature Eaton’s ‘mirror-selfies’—performative photos that blur his real life with a sort of self-deprecating social satire. In the earlier series, Melfies, he handed his camera over to other people to take his photo, then sold them via his website, printed on low-cost T-Shirts. These ‘ready-to-wear’ Jackson Eatons made a tongue-in-cheek comment on self-branding. Yet, his ‘promotional’ portraits were comically vulnerable and awkward. Digital narcissism is less about self-love, he suggested, and more about self-loathing.

To create Melfies 2 Eaton took his own photo anywhere he could find a mirror then he digitally dissected his body in Photoshop and reverse-image searched the parts in Google. Piecing together the results, an array of poor and peculiar matches, Eaton created fragmented bodies—digital versions of Frankenstein’s monster. Each melfie, Eaton notes, is “a surrealist collage of networked selves”. They make visible how our sense of lack and common desire for completion overlap, in online space, with the objects of consumption. Everything from poodles to elephants, TVs, fridges and settees, overlay Eaton’s limbs. Faces from professional models and clothing dummies camouflage his head. In these collective, cut-and-paste portraits, Eaton is male and female, product and person. A mash-up of the banal, the bizarre and the beautiful.

Mechanically churned out on reams of paper that overrun on the gallery floor, these melfies move from the flows of digital space to the ‘traditional’ materiality of the photographic medium. This offers a 21st Century upgrade to Adorno and Horkheimer’s early critique of the culture industry. The mass media, they warned, was homogenizing culture, and with it, our identities. Like products, people were “moulded-men”. While we’re now a mass of prosumers, Eaton suggests, not all that much has changed. By expressing what makes us us through commodities we’re still remixes of readymade forms. Moreover, in the immaterial online realm, our digitized identities are moulded by marketers when our shared desires are linked to ads.

Eaton does, however, offer hope—“a kind of resistance to the redundancy brought about by increasingly repetitive and automated forms.” After all, his mismatched melfies, in their failure, evoke a beautiful truth. None of us ever will be perfectly ‘whole’, however much we consume. Rather, it’s our imperfections and inconsistencies that succeed in making us unique.

Eaton is currently undertaking a Masters of Fine Art at Monash University. His recent project Better Half was featured in Primavera 2013 at the MCA. It was collected by the AGWA and is published by Pearce Press. In 2013, he won the Iris Award for portrait photography.