Possibility of the Angel. The project, in so doing, couches itself within a broad array of intermeshed and juxtaposed topics, but so also it presents a large variety of media solutions and artistic genres - ranging from sculpture to photography, objects, and installations. The exhibition will take place on the 10th Edition of Sharjah Biennial Plot. 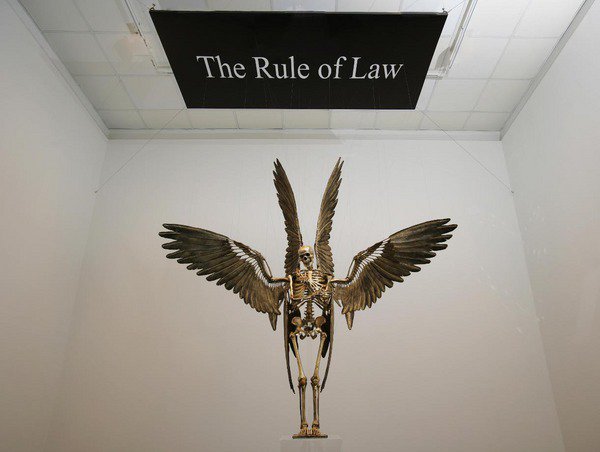 First show of the project ‘Possibility of the Angel’ will take place on the Sharjah Biennial Plot for a Biennial (10th Edition curated by Suzanne Cotter and Rasha Salti in collaboration with Hajg Ajvazyan), March 16 – May 16, 2011

Raffie Davtian's artworks of recent years reveals a genuine predilection that he evinces for contemporary philosophy and theory, and the artist's penchant thereby for making sense of his own times by recourse to conceptual ruminations; which Raffie Davtian later – like the creative epigone – translates into a gesture, into an artistic allegory, a symbolic narrative. The Possibility of the Angel is one such exposure to theory where Raffie extends his interest to biopolitics as both a locus and a practice of life production; as a mechanism of policing, monitoring and regulating life through manifold valorisations of biopower; and last but not least, as a modern expression of man's will to power exercised politically, and in scales hitherto unknown, on human lives. The project, in so doing, couches itself within a broad array of intermeshed and juxtaposed topics, but so also it presents a large variety of media solutions and artistic genres – ranging from sculpture to photography, objects, and installations. Raffie dedicated well-nigh the entire 2010 to this project; and the result is a work consisting of four separate but mutually dependent pieces; each furnished with a title, and with a specific politico-juridical vocabulary, but each also bearing the 'name' of the angel as a reference to the mutual belonging that obtains between the project and the contemporary discourses of the theological genealogy of power.

The visual gateway through which the project worms its way towards its conceptual pivot is a gigantic sculpture (as high as about 3.5 meters). The artist reproduces an imaginary torso of a spiritual substant – of an angel resembling the anatomical skeleton of a multi-winged human being. The sculpture – homos-angelus – is rendered with such meticulous attention to anatomical minutiae that the viewer may well take it to be an ideal model for a careful study of the very 'possibility of the angel.' Coated fully with a silver patina, the sculpture is akin to those traditions in Christian iconography that made a selective use of silver and gold as materials with which to best eliminate the interplay of chiaroscuro (light-and-shade modeling), and to also impart a radiant glow to their icons. For the icons, because they suggested and visualized the gleaming light emitting from within god, they also ruled out in the meantime anything that might look on them as if murky or shaded whatsoever. Unshaded like an icon, but so also suspending from the 'letters of the law,' an artist’s angel then stands to imply that there - between the 'dispensations of god's providence' and the '''sacraments'' of the ‘rule of law' - exists an indivisible link. One that obtains, echoing Bourdieu's genesis of religion, in line with perceptions about 'the unity between the ''celestial'' and ''ecclesiastical'' hierarchies'',' and so also about the 'homology among the political, cosmological, and ecclesiastical structures' in a world where ''the first principle, the cause and origin of all things [is believed to be] the One, the Absolute,' and where thereby, 'all things whatsoever - spiritual and material things - the archangels, the angels, the seraphim and cherubim and all the other celestial legions, man, organic nature, matter - all of them are bound in this golden chain about the feet' of that one Absolute.'[i]

Well to the point here are some of the insights we find in the Theological Genealogy of Power and Government by Giorgio Agamben, where he extracts two dominant paradigms from within the broader tradition of Christian Theology. One is the paradigm of Political Theology grounded in the idea of one god and the transcendence of sovereign power which, he claims, has given rise to the modern forms of sovereignty in which the sovereign operates in a state of exception (emergency), and stands thereby well above, and so also outside, the rule of the law. The second paradigm he derives is that of Economic Theology; an understanding of economy conceived in terms of immanent order which, he suggests, has led to the advent of modern biopolitics, and the subsequent supremacy that economy and management have acquired today over all aspects of modern social life. A form of okonomia (divine economy), in other words, which late Christian ecumenical councils fabricated relentlessly as part of their efforts to reinforce and perpetuate their own hierarchical models of domination and governance.[ii]

The second piece of the project – The Evolution of the Angel in Line with the State of Exception – features a series of photos with 'portraits' of angels. Here, the artist seems to resort to photography as a genre viewed sometimes, albeit superficially, to embody the objective perspective of modern science; as a style, in other words, that defines its raison d'etre not so much in terms of its production of authentic visuality, but by its ability to map reliable political geographies acquired by individual artists through personal archaeological excavations of knowledge. Thus, we find in the photo-series a number of descriptions accompanying the photos: Homo-Outcast Angelus (archaeological excavation on Auschwitz site Poland 1939); Homo-Embargo Angelus (archaeological excavation on Gaza Strip site 2007); Homo-Subjugate Angelus (archaeological excavation on Omarska site Bosnia 1992); Homo-Bare Angelus (archaeological excavation on Guantanamo site Cuba 2002); Homo-Exile Angelus (archaeological excavation on Archipelago Gulag site Russia 1918), and so on. By so investing his homos-angelus with a binomial nomenclature, the scientific method of ranking the entire known natural world by genus and species types; and so also furnishing that taxonomy with a sophisticated political typology and a temporal intensity, Raffie Davtian groups his various branches and rankings to organize them into a genealogical tree which he labels suggestively Governance. Now, the governing elites throughout the world are known to evade legal responsibility for their actions and decisions, and they also always remain exterior to the otherwise valid common juridical orders of their specific contexts. Their alibi for this state of exception is their plea of the state of emergency, which, we know, is well enacted during periods of war and civil unrest, but so also in times of peace. As such, that political extension where power is held and constituted, as G. Agamben warns us,[iii] is not just a contained and delimited space, but is a regime that represents a tendency of a much broader order; one that defines a regime of the law within which the norm is the state of exception/emergency. And one that through 'the disciplinary control achieved by the new bio-power ... [and its] series of appropriate technologies, so to speak created the "docile bodies"'[iv] that human beings are known to have undergone.

The other sculpture in the project exemplifies an angel of sovereign power, and carries the suggestive title How many pins can be fixed on the face of an angel? This is a playful reversal of a famous medieval scholastic debate: 'How many angels can dance on the head of a pin? A polemic, if we try to interpret it, that was concerned with the materiality of the angels, and with whether they could be thought in terms of categories of space (therefore, also extension) and categories of time (therefore, also speed as they carried god's divine decrees). It seems, that by inversing the medieval puzzlement, an artist is apparently also adequating it to pose his own question: How further, and how much longer, will sovereignty - as a form of governance operating under the 'state of emergency' - persevere reproducing the link between the law and violence?

The answer, it seems, is only available with an eye equipped with microscopic vision. Raffie Davtian involves his viewers into a pseudo-scientific space, A Laboratory of Angels, well equipped with a number of installed microscopes. It is a common knowledge that the microscope, by modifying optical density and reducing the focal lens-to-image distance, enables to go beyond the naked eye's limits of vision and allows thereby to grasp details which would otherwise be inaccessible. But it is also a common knowledge that microscopic vision precludes the occurrence of all linear perspectives. A painting tactic first codified by the school of Quattrocento paintings, but also viewed today as a point of view that involved a strong hierarchical component. Through the metaphor of microscopic vision, then, Raffie Davtian seems to break down the hierarchies that constitute the unity of the modern world. He does so in his laboratory were the angels simply reappear as ordinary insects with their wings torn apart ...