The exhibition focuses on completed private dwellings, on the basis of which Murcutt's position and his ideas can best be appreciated.The meticulous photography by Anthony Browell bears witness to the harmony between the buildings and their natural surroundings while emphasising the architect's basic approach to sustainable building for the future. 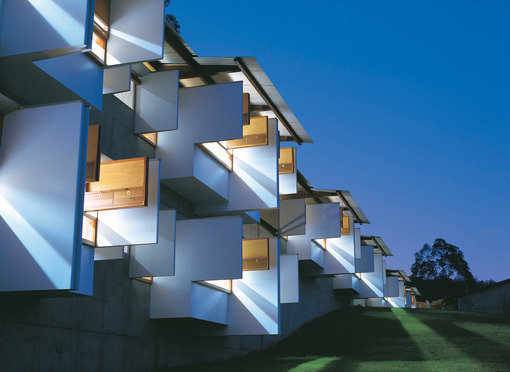 "That was the general notion of the building – that it breathed. It recognised that it was a windy day, a wet day, a cold day – and that was very important to me, to perceive when you woke up in the morning what kind of day it was, in other words, perceiving through the senses, through one’s reactions to the climate." Glenn Murcutt

Glenn Murcutt, Pritzker prize-winner (2002) and Australia's most internationally renowned and most important architect, holds an independent artistic position that consistently avoids the mainstream. He has a small private studio, and sees no need to the computer and new media for his architectural vision or to realise his projects. Murcutt draws and builds — both forward-looking and equally anachronistic — one house after the other entirely on his own, having completed over 500 buildings in this way over the past 40 years. These buildings are all in Australia, almost exclusively housing and, with few exceptions, designed, planned and the construction was supervised by him in person.

The exhibition concentrates on the fundamental elements of his work, approaching these primarily via his drawing technique, which he sees as an essential instrument of discovery: "Architecture is a marvellous expression of the process of discovery, ...It's like being a scientist who doesn't know the answer, but knows the path to it... That is what I'm in it for, the joy of the path, the discovery." Murcutt reads the landscape like a text — and all of the information that he gleans from this landscape-text flows into his design process and becomes buildings that integrate the positive qualities of the natural surroundings into the occupants' everyday lives.

Murcutt's specific position in the development of modern architecture is characterised by a strong relationship to traditional building techniques combined with the use of local materials. The form adopted by the buildings is optimised architecturally and for the climate, and completed with intelligent details. The houses look almost prefabricated; individual construction elements are joined so that they can be dismantled for reuse in the future. The completion of buildings that have a minimal impact on the environment is what he sees as the actual creative challenge. With this concentration on a responsible handling of the environment, his buildings have always been ahead of today's international trend towards sustainability in contemporary architecture.

THE EXHIBITION
Following the sensational success of the summer exhibition with Alexander Brodsky, another proponent of what Dietmar Steiner terms 'slow architecture' is to be presented for the first time at the Architekturzentrum Wien. The exhibition, based on a concept by the Architecture Foundation Australia, focuses on completed private dwellings, on the basis of which Murcutt's position and his ideas can best be appreciated. The meticulous photography by Anthony Browell bears witness to the harmony between the buildings and their natural surroundings while emphasising Murcutt's basic approach to sustainable building for the future. Large scale plans, preliminary sketches and detail plans combined with a video on Glen Murcutt show how he works. Alongside a display of the award-winning Arthur and Yvonne Boyd Art Centre in Riversdale, New South Wales, is an introductory survey showing further projects.

GLENN MURCUTT
Born in London in 1936 during a trip to Europe by his parents, he spent his early childhood in Papua New Guinea before moving to Sydney with his family where, from 1956 to 1961, he completed his studies at Sydney Technical College (now the University of New South Wales). Following a field trip to Europe and practical experience in leading architects' offices, he opened his own studio in 1969. Without any permanent staff and participating only in project-specific cooperations, in his one-man studio he has been pursuing an architecture rooted in indigenous Australian culture and in the diversity of climates and topography on the continent. He teaches and holds lectures as a professor at universities around the world, and is one of the founding members (with Richard Leplastrier, Peter Stutchbury, Brit Andresen, Ian Athfield and Lindsay Johnston) of the Architecture Foundation Australia, a non-profit organisation that arranges the Architecture Summer School, the Irish-European Architecture Master Class and the Glenn Murcutt International Master Class.

An exhibition by the Architecture Foundation Australia in collaboration with the Architekturzentrum Wien.

An equal relationship between economic building, creativity and adaptation to local conditions provides the leitmotif for the architecture of Peter Stutchbury, who with Glen Murcutt is one of the six founding members of the Architecture Foundation Australia. The focus of Stutchbury's work is on engaging with the indigenous population, having undertaken research in Australia, Africa and Asia. The buildings completed in this period, such as Israel House, the New Design Faculty and Art Gallery/ Newcastle University and a number of apartment buildings, are the result of his field trips. Since 1981 Stutchbury has been active as a professor of architecture and design at various universities worldwide. He sees buildings as "rooms of education — the bridge between walking in the bush and wandering through the mind". In his talk about his works Peter Stutchbury will be presenting an understanding of architecture that harmonises building and the natural environment.