A new museum for Vienna the 20er Haus turning into the 21er haus. Installations/works by: Lucio Fontana, Andrea Fraser, Marcus Geiger, Florian Hecker, Sasha Pirker, Lois Weinberger and Heimo Zobernig. Film projections by Josef Dabernig and Pierre Huyghe, and artists' rooms by Peter Kogler/ museum in progress, Oswald Oberhuber, Christian Philipp Muller, Sofie Thorsen and Franz West. Curators of the exhibition: Bettina Steinbrugge and Cosima Rainer. The opening of the 21er Haus will be celebrated with artistic interventions which stage the spatial structure and the history of the house. 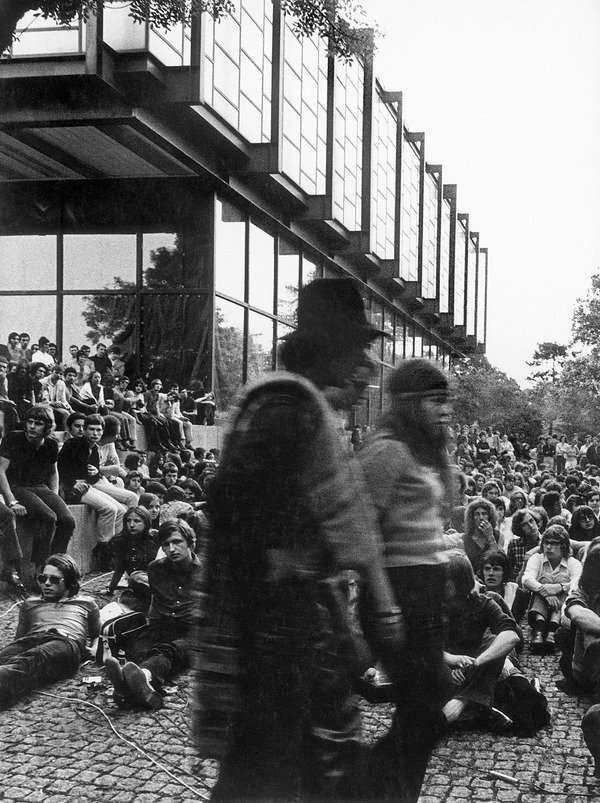 21er Haus
In 1962, the Austrian pavilion designed by Karl Schwanzer for the 1958 Brussels Universal Exhibition was opened as Vienna’s Museum for Twentieth-Century Art. Now this architectural gem, following complete refurbishment, will be given a new profile under the Belvedere’s guidance. With its light and clearly arranged exhibition and event facilities and a cinema, the building and its structure meet all the requirements when it comes to interdisciplinary state-of-the-art production conditions. In order to guarantee its operation as a modern museum, the 21er Haus is currently being adapted and enlarged by Adolf Krischanitz, a student of Karl Schwanzer’s. From mid-November, the building will function as a platform for presenting Austrian art from 1945 to the present day in an international context. The institution’s programme is being developed by curators Cosima Rainer and Bettina Steinbrügge under the supervision of Director Agnes Husslein-Arco. Additionally, the new museum will accommodate the permanent collection of the Fritz Wotruba Foundation and the Federal Government’s Artothèque.

The mission of the 21er Haus
The 21er Haus is to be understood as a place of artistic production, reception, and reflection. The focus is on Austrian art of the twentieth and twenty-first centuries and its embedding in an international context. The Belvedere’s holdings, which will be given a permanent presence in a specially designated part of the building, will serve as a basis for research and exhibition activities. Relying on the Belvedere’s collection as a starting point, the programme, with its various formats, is meant to build a bridge between the museum’s modern architecture and contemporary art, thereby pursuing multidisciplinary and socially analytical approaches.

Thematically focused temporary displays and corresponding monographic positions will concentrate on the numerous and ever more significant interrelationships among artists. The museum’s core tasks of education, collecting, research, and conservation are considered integral parts of all exhibition projects and provide the foundation for the production and the positioning of Austrian art. The 21er Haus will make it possible for visitors to gain a comprehensive and profound overview of recent Austrian art history in all its diversity. It is the museum’s primary task to commit itself to the continuation of the international integration of Austrian art up to the present.

The cooperation with other institutions, as well as artist- and curator-in-residence programmes, will ensure a regular exchange of new insights in local and international developments. Our exhibition activities will be complemented by lectures, performances, screenings, and concerts in order to seek a lively dialogue with our audience. By offering various approaches and perspectives, the new museum’s goal is to encourage people to actively deal with art, thereby reviewing conventional art historical patterns of reception. It is a place of both art historical and artistic research – a place of discourse, dissent, and experiment in which society is questioned and rediscovered.

Architect Adolf Krischanitz on the Architecture and its Adaptation
In 2003, the Republic of Austria, represented by the Austrian Burghauptmannschaft, conducted an open two-stage competition across the European Union for the refurbishment and expansion of the 20er Haus that was eventually decided in favour of Adolf Krischanitz and his design. One of the focal points of Krischanitz’s plans is on urban development.
The architect’s design remedies the insufficient presence of the original structure on Arsenalstraße by lowering the area in front of it and transforming it into an atrium. The façade and an access bridge determine the space in between that will have a lasting impact on the building’s surroundings. Through the exposure of the basement, emphasis is placed on its utilitarian character, with facilities created for the permanent collection of the Wotruba Foundation, a café and restaurant with an outdoor area, and a children’s studio. The Federal Government’s Artothèque is accommodated on the second basement level.

The main structure is accompanied by a six-storey building in the form of a tower as wide as the forecourt. It provides additional floor space for offices and administrative facilities and simultaneously has a signalling effect when seen from a distance. It is connected to the main structure exclusively below ground. The tower’s façade quotes the grid of the shell enclosing the 21er Haus. The principal building’s monofunctional utilization has been abandoned in favour of an open museum structure. The upper floor offers fully air-conditioned exhibition space, while the monumental central hall on the ground floor overlooking the Schweizer Garten has been transformed into a multifunctional room suitable for various events. The primary goal was to preserve the characteristic appearance of a building that has become known as a symbol of the cultural development of the post-war period. What matters according to Krischanitz is not the material and the manifest building substance as such, but the space that is generated by the shell of the 21er Haus. This quality is to be preserved in order to give art a milieu of lightness and airiness in which it can breathe.

For the opening of the 21er Haus, the building proper, which once served as a pavilion for a Universal Exhibition, and its renovated architectural structure will be in the focus. We will not only thematize the building’s history, but also what has been set going or interrupted, rhythmized or reinterpreted by it. This is why we have invited a number of artists to deal with its architecture and with the mission of a new museum and have selected extant works of art dealing with issues related to the future museum.

The unique architectural facilities make it possible for the building to be utilized in a great variety of ways. This will be demonstrated by a variegated programme consisting of artistic interventions and numerous events, including concerts, guided tours, and panel discussions.

Each and every artistic intervention will approach the building in its individual fashion, transforming the site into a ground of free experiment on which the different artistic genres can meet and overlap. Visitors will be guided and accompanied by huge red felt carpets. A sound project is meant to eliminate the boundaries between body and architecture, with an “ambiente spaziale” opening up the room into a new dimension, thus emancipating itself from the architectural framework. A filmic work will convey the transitory moment between past and future during which the building inscribes itself in the annals of history. In the museum’s cinema, a film documentary newly compiled by Wilhelm Gaube in cooperation with the Filmarchiv Austria will present a montage of newsreel sequences about the 20er Haus. This will be juxtaposed with a filmic installation reflecting art history and dealing with the museum of tomorrow. Eventually, artists will take the floor, addressing issues of art, everyday life, the media, and the market, thereby anticipating what will also be discussed at the 21er Haus.

Image: 21erHaus. Concert in the Skulpturengarten of the 20er Haus. Photo: Erich Reichmann