The exhibition deals with the general theme of secret societies through the prism of contemporary art in the current context of media super-exposure. It is through the paradox that secrets are only secrets if they are communicated, yet disappear as soon as they are out, that this representative selection of artworks relates to secret societies and to society at large. On display more than one hundred works, including paintings, sculptures, films, installations and various documents. 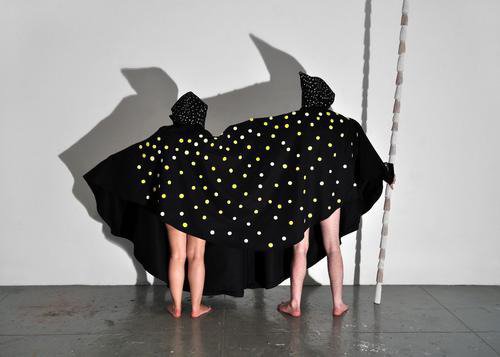 Secret Societies
To know, to dare, to will, to keep silence

An exhibition organized by the Schirn Kunsthalle Frankfurt in collaboration with the CAPC musée d’art contemporain de Bordeaux.
How to present or represent the invisible? How to deal with it? Why and how, in this case, to make public what is secretive by nature? Although the exact meaning of the term “secret society” is disputed, several of the proposed definitions indicate that a degree of secrecy and secret knowledge should be present.

For Simmel, secret societies have an external quality, which is protection and an internal quality,which is themutual trust between itsmembers to keep silent. In order to impose such silence on its members psychologically, they are asked right from the start to swear an oath with the threat of being sanctioned if they don’t abide by this oath. This gradual initiation of its members corresponds to the strong hierarchical structures of secret societies. One of the most important aspects that distinguish secret societies from open societies is precisely the importance they give to formulas, customs and rituals (the secret of the ritual). The aspect of “exclusion” that characterisesmost secret societies is always linked to a desire for freedom. Autonomy is the very essence of secret societies, but an autonomy, which flirts with anarchy.

The term “secret society” is usually applied to organisations ranging from the common and harmless (collegiate fraternities) to mythical organisations described in conspiracy theories as immensely powerful, with selfserving financial or political agendas, global reach, and often satanic beliefs. Since ancient times, secret societies have been historically the subject of suspicion and speculation from non-members. Because some secret societies have political aims, they are illegal in several countries. In a certain sense, most secret societies are generally considered to be antisocial; they are believed to contain non-positive elements or that are outright harmful to the community at large. The most prominent ones, just to cite a few, range from the Freemason organisations, the Rose Cross, the Kabbalah, the Mafia, to the Ku Klux Klan or Al Qaeda.

Secret societies, in fact, mirror certain facets of contemporary art. Broadly speaking, one can even say, that in many ways the artwork, the artist and the art world’s mechanisms have always had connections to the way secret societies function but it is important to state that the links that exist are historically determined and one cannot generalise them. Or else one can easily reproduce an overromanticised idea of art as a form of resistance, or art as a cult. In a world structured and dominated by accelerated communication processes and exposure, secret societies question the “status quo” by their implicit refusal to participate. Thus the central interest of the exhibition is to carry out an artistic and cultural investigation of these movements in order to gain a better understanding of their mechanisms, as well as of their desires and motivations, which are also shared by the art sphere. For this process to be truly meaningful, it is crucial that it should not be confined to expose the desires and feelings that secret societies appeal to but it should explore these desires and feelings from the inside.

Secret Societies is organized by the Schirn Kunsthalle Frankfurt in collaboration with the CAPC musée d’art contemporain de Bordeaux. The exhibition was on show in Frankfurt during the Summer 2011.