The exhibition is the latest in the 'Picture Ballot!' series. Taking as its starting point the painting Weltbild (World Picture, 1961) by A.R. Penck and the pictographically encoded visual idiom in modern art, it explores works from Paul Klee, Joan Miro', Alberto Giacometti, Jean Dubuffet, Keith Haring, Jean-Michel Basquiat and others. They developed a language that was part figurative representation and part abstraction. On view paintings, sculptures and works on paper. 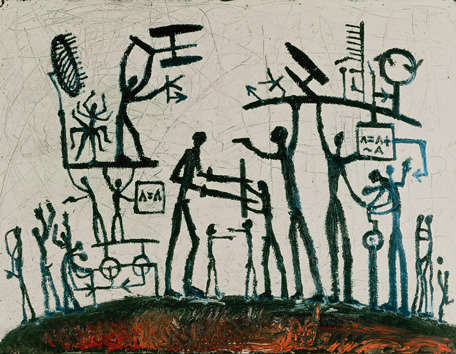 From 11 November 2011 to 12 February 2012 the Kunsthaus Zürich is staging the exhibition ‘Encoding Reality,’ the latest in the ‘Picture Ballot!’ series. Taking as its starting point the painting ‘Weltbild’ (World Picture, 1961) by A.R. Penck and the pictographically encoded visual idiom in modern art, it explores works from Paul Klee, Joan Miró, Alberto Giacometti, Jean Dubuffet, Keith Haring, Jean-Michel Basquiat and others. Like Penck, these artists developed a language that was part figurative representation and part abstraction. The exhibition reveals the methods chosen by artists in different generations and programmes to encode reality.

‘WELTBILD’ – A BASIS IN THEORY
At the heart of the exhibition, which includes about 20 paintings, sculptures and works on paper, is a work by Ralf Winkler, better known under the pseudonym A.R. Penck. He was born in Dresden in 1939 and spent the first forty years of his life in the GDR. Influenced by cybernetics and sociological systems theory, Penck developed a pictographic idiom that sets out to analyse the relationships between the individual and society. Its aesthetic evokes associations with cave painting. Penck unites his idiosyncratic social and political theories under the titles ‘Weltbild,’ ‘Systembild’ und ‘Standart’ (World Picture, System Picture and Standard). He attempts both to introduce a logical and systematic, almost scientific dimension into the world of art, and to democratize art by creating works that are capable of communicating with the general public.

A HISTORY PAINTING OF THE COLD WAR
‘Weltbild’ was painted in 1961 and is the first of Penck’s works in which he deploys his visual language of symbols and pictograms. Created at the time when the Berlin Wall was being built, ‘Weltbild’ is a modern history painting that speaks of the tense relationship between East and West during the Cold War.
Measuring 122 x 160 cm, it depicts two opposing groups of black stick figures against a white background. The figures, representing archetypes of human existence, adopt various postures – attacking, defending themselves, loving, pleading – and symbolize the attitudes and behaviour of human beings towards totalitarian systems. Weapons and means of communication, espionage equipment and instruments of torture as well as signs proclaiming mathematical truths dominate this undefined, timeless landscape. The black and red ground stabilizes the composition, which consists mainly of isolated figures, but these dancers on the volcano’s rim enjoy only the appearance of security. An eruption appears imminent.

PRIMITIVISM, SIGNS AND GRAFFITI
Throughout the 20th century there were numerous artists who, like A.R. Penck, sought to break with the conception of art as mimesis of nature. Inspired by primitivism but also by political, social and personal circumstances, they developed comparable visual vocabularies and a reality of their own. This subjective truth, populated by symbols and references, is often difficult to decipher, for it manifests itself in different forms: poetic in Joan Miró and Paul Klee, spontaneous in Pierre Alechinsky and the members of the CoBrA group, naive yet violent in Jean Dubuffet and the exponents of Art Brut, social and provocative in the graffiti artists of the 1980s. Yet what all these artists have in common is an interest in primitivism and forms of art that are not influenced by the norms and conventions of the western world; the quest for universal truths expressed using the simplest of means; the predominance of line, the love of calligraphy and, finally, the use of signs and symbols.

A SPIRIT SHARED WITH GIACOMETTI, SOUTTER AND BISSIERE
The artists belong neither to the same generation nor to the same artistic group, but their works express a collective spirit, a universal truth beyond forms and symbols. ‘Encoding Reality’ places A.R. Penck’s ‘Weltbild’ in the context of works by Pierre Alechinsky, Jean-Michel Basquiat, Roger Bissière, Jean Dubuffet, Alberto Giacometti, Keith Haring, Paul Klee, Joan Miró, Louis Soutter and Carlo Zinelli. Guest curator Laura Sánchez Serrano has gathered together works from the Kunsthaus collection as well as loans from renowned Swiss collections, and also devised the concept for the exhibition. It is left to visitors to decipher the final secret of the ‘artist-encoder.’

BACKGROUND: ‘WELTBILD’ WAS CHOSEN AHEAD OF THE ‘KAPPELER MILCHSUPPE’
At the start of every year since 2001, the members of the Zürcher Kunstgesellschaft have chosen from a shortlist a work in the Kunsthaus collection to which an exhibition will be devoted. Once the selection has been made, a young art historian is offered the opportunity to curate the exhibition.
For 2011, former collection curator Christian Klemm chose the history painting as the topic. He proposed the following works to the members: Fra Angelico and Zanobi Strozzi, ‘Saints Cosmas and Damian healing Justin’ (ca. 1435/1440), Mattia Preti, ‘Orpheus and Eurydice before Pluto and Proserpina in the Underworld’ (ca. 1635/1640), Johann Heinrich Wilhelm Tischbein, ‘Brutus discovers his sons’ names on the list of conspirators and condemns them to death’ (1785/1795), Albert Anker, ‘The Kappeler Milchsuppe’ (1869) and A.R. Penck, ‘Weltbild’ (1961). ‘Weltbild was created while the artist was still in the GDR. It received more than 100 votes more than the ‘Kappeler Milchsuppe.’ In 1980, Penck moved to the West, and now lives and works in London, Dublin and Berlin.

The exhibition is accompanied by a brochure (31 pages, 18 color images) which is available for CHF 6 at the Kunsthaus Shop.