Vorahnung (United Brothers and Sisters): in a complex installation comprising reworked and fragmented elements from the architecture of the previous exhibition at the Kunsthalle Zurich, light elements and a new project with United Brothers which, again, takes up the idea of the collective, this show brings together paintings by Bratsch and works by Roder who uses a variety of media. Superimposing information and fiction, the Human Valley winter presentation The Money Plot by Egija Inzule, Tobias Kaspar and Hannes Loichinger takes a look at how society deals with the universal means of money exchange. 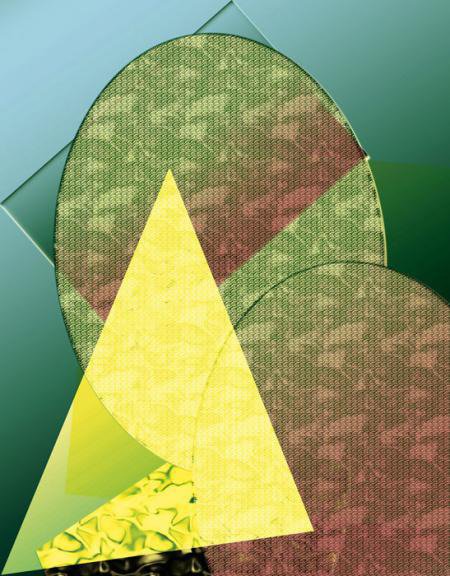 Kerstin Brätsch and Adele Röder, who have presented their works in numerous exhibition and project formats in association with and under the banner of the collective DAS INSTITUT, present the first direct contrasting of their individual artistic positions at the Kunsthalle Zurich's temporary home in the Museum Bärengasse. In a complex installation comprising reworked and fragmented elements from the architecture of the previous exhibition at the Kunsthalle Zürich, light elements and a new project with United Brothers which, again, takes up the idea of the collective, this show brings together paintings by Kerstin Brätsch and works by Adele Röder who uses a variety of media.

From the outset Kerstin Brätsch and Adele Röder's works explore issues concerning the authenticity of artistic creation and the value and utility of art and artistic formulations. The polarisation between the deconstruction and confirmation of their own artistic practice and the instrumentalisation of both art and the person of the artist herself take place in their works, in their individual practice and in the various collective formats, with which they operate. The two artists repeatedly explore the theme of the virulent marketing of art and the persona of the artist today as occurs in corporate design and in image branding strategies. However, the importance of social networks and the accompanying effects of "viral marketing" are also made explicit.

With this exhibition in the Kunsthalle Zürich the two artists explore their instrumentalisation of and through DAS INSTITUT. After the recent presentation at this year's 54th Venice biennale and their participation in the exhibition project "Non-solo show, Non-group show" at Kunsthalle Zürich in December 2009, the artists opt for a "disclosure" of their individual artistic approaches and, in this way, for the renewed confirmation of what individual creativity, ways of exchange and conveyance can make possible.

As conceptual works, the paintings of Kerstin Brätsch (born in 1979, lives and works in Germany and the USA) focus their attention on the performative aspect of artistic images today and the accompanying questions of presentation, distribution and the attribution of meaning. Her works are among the most exciting statements to be created in this medium in recent years. Just as she dia-metrically opposes the ideas of signature and authenticity associated with paintings with collective, reproducing and performative artistic approaches, with an equal lightness of touch, Brätsch tests the boundaries between artistic fields of production. She uses her large-format oil paintings on paper as an abstract stage: she copies, multiplies and fragments them, or paints them on transparent Mylar sheets which enable the complex superimposition of images. This engenders the constant attempt to dismantle and convert painting itself with the aim of overhauling and rebuilding it. Brätsch instrumentalises her position as "painter"/publicly active "artist" by both questioning it and mixing it with possible alternative models – for example in the form of collaboration and in the resolute transparency of her artistic process. This approach becomes both the act and the consciously assailable projection surface.

In her works, Adele Röder (born in 1980, lives and works in the USA) operates with an abstract system of signs and symbols which she varies in numerous formal and material manifestations. Exploiting the possibilities but also conditions of digital "design" and production, she creates an artistic system that relates in its logic to the symbolism, exemplary nature and presence of signs while simultaneously exploring the ways in which they functions as the bearers of information in art, fashion and design. The forms in her digital designs are initially withheld from fixed materialization. The artist subsequently allows them to be incorporated into wide-ranging realisations and also object versions – be they as slide projections, as backgrounds for posters/magazine advertisements or in highly diverse textile formations, all of which explore the characteristics and system of the design. Textiles assume an important role in her work here as they offer a broad field of reference for human use and the man-world interface – in clothing, as dwellings, as the bearers of symbols in the decoration of the surface of our bodies and world. For Röder, textiles represent a cursory presence and, hence also, flexible fields of meaning and function – they are at once form and non-form. In the Starline - Necessary Couture and COMCORRÖDER (Adele Röder for DAS INSTITUT) series presented in this exhibition, she explores the boundaries of abstraction, symbol, mutation and pattern in relation to their materialization and makes it possible to experience the complex symbolism of the formal vocabulary used in association with the medium textile as the interrogation of the material together with the material itself as the bearer of information.

Kerstin Brätsch and Adele Röder's works emerge individually and repeatedly also for and as DAS INSTITUT. With this "Agency for Import and Export", the two artists consider the problems associated with the identification of art in a world completely covered with goods. They are interested here in performances of things and their meanings, possible instruments of abstraction and in what art, fashion, design and our product world in general can produce in terms of models (design), information (advertising) and transfers of meaning (distribution). In the specific works which Kerstin Brätsch and Adele Röder create for or with DAS INSTITUT, they explore change and mistaken identities and categories offered to our identity as a cover by the customising and identity projects of our media-dominated everyday lives.

The series "Glow Rod Tanning Interchangeable Paintings" (Kerstin Brätsch für DAS INSTITUT), which is presented in the Kunsthalle Zurich in the Museum Bärengasse for the first time, consists of paintings on transparent polyester films which can be layered and combined to create constantly changing images. These are contrasted with abstract light and textile elements (Adele Röder for DAS INSTITUT). As a display system, the artists have created a complex construct of encounter but also of the varied translated "use" of their works: Kerstin Brätsch's paintings and Adele Röder's textiles adopt fragments and actual ruins of the exhibition architecture from the Kunsthalle's previous show by Walid Raad. They have them dismantled and transform them into light benches and illuminated showcases. The artificial light opens up another level here: while the viewers are courted by this and associations with tanning studios are evoked, a disturbing complication in the encounter with the work of art also arises. Once again, the artists challenge traditional hierarchies through the "suffering" of painting evoked in this way. The presentation form of the light bench refers to a "consultation" with United Brothers (the artists Ei Arakawa and his brother Tomoo Arakawa, who runs the Blacky Iwaki tanning studio near Fukushima) and incorporates the exhibit- tion into a research project – presented through the exploration of Abstract Anxiety – which culminates in the project "BLACKY Blocked Radiants sunbathed", a collaboration between DAS INSTITUT and United Brothers. In keeping with the title of the exhibition "Kerstin Brätsch / Adele Röder. Vorahnung [United Brothers and Sisters]", the anticipation and announcement of this project, which explores topics concerning social and energy participation, become part of the exhibition through the naming of future exhibition projects (for example at the Halle für Kunst in Lüneburg eV) on a large poster and with posters, film trailers and objects in the exhibition itself.

The Kunsthalle would like to thank the Präsidialdepartement der Stadt Zürich, LUMA Foundation, Hulda und Gustav Zumsteg-Stiftung, Jakob Schlaepfer for their support.

Superimposing information and fiction, the Human Valley winter presentation "The Money Plot" by Egija Inzule, Tobias Kaspar and Hannes Loichinger takes a look at how society deals with the universal means of money exchange.

Introduced as the thematic focus of Issue O of the journal PROVENCE and with the exhibition "Les Journalistes" (1986/1987, Musée d'Orsay, Paris), which was curated by Chantal Georgel, in mind, "The Money Plot" continues the observations on journalistic formats and society novels of the late 19th century and compares Honoré de Balzac's novel Illusions perdues (1836-1843) with Guy de Maupassant's Bel Ami, both of which tell the socio-economic tale of parvenus in French society.

"From the 19th century, at the latest, financial transactions and markets have been considered as exemplary social scenes", as literary scholar Joseph Vogl wrote in the FAZ not long ago. "It appears that literature, in particular, wanted to repeatedly decode the dynamics, types and machinetions, the sweeping gestures and petty secrets, the norm positioning and pathologies that dictate our fate." Vogl refers to the parallelizing of the progressing narrative with the continually replenished payments of the anonymous German protonovel Fortunatus (1509) and the speculation novel of the crisis-shaken 19th century - Émile Zola's L'Argent (1891) and Balzac's banker's novels.

In the early 20th century, sociologist and anthropologist Marcel Mauss introduced exchange into social theory as the primary moment of the establishment of social contact and as the origin of sociallization. This concept, which is developed in various works by Mauss, including his essay "Essai sur le don" (1923/1924), was received with astonishment as it does not formulate the social and the economic principle as opposites but as completely connected. According to Mauss, a gift is price-less in principle but may be reciprocal. It is located between the pure and one-sided gift, which does not allow for reciprocation, and the economic transaction, which concludes with payment for the goods obtained. Social conventions become visible through the use of money in every-day life, which, like tipping, hover between the two categories and are subject to the unwritten laws of social guidelines.

Following the Driftwoods announced with Issue V, in November 2011, PROVENCE will publish a special edition THE PROVENCE CITY GUIDE: NICE, a travel guide to the city of Nice which is shown for the first time in conjunction with the presentation "The Money Plot": "You don't come to France's fifth-largest city for a quiet time or a seaside holiday. You come for business - not pleasure."

The Kunsthalle would like to thank the Präsidialdepartement der Stadt Zürich, LUMA Foundation, Hulda und Gustav Zumsteg-Stiftung for their support.

PROVENCE (edited by Tobias Kaspar and Hannes Loichinger) is an eight issue magazine, the first issue of which, Issue P, was launched in June 2009 in Basel as part of an exhibition staged with Egija Inzule and including a work by John Knight and documents on Ghislain Mollet-Vieville. Issues R, O and V have since been published inter alia in association with the exhibition "In the Middle of Affairs" at the Künstlerhaus Stuttgart, and presentations at Silberkuppe, Berlin and The Artist's Institute, New York (all 2010).

Egija Inzule is a curator and is currently working on a series of exhibitions and publications in Riga. Tobias Kaspar is an artist and lives in Berlin. Hannes Loichinger is running the Halle für Kunst in Lüneburg with Valérie Knoll.

HUMAN VALLEY is a one-year project by Dominique Gonzalez-Foerster and Tristan Bera for Kunsthalle Zurich at the Museum Bärengasse. A space for lingering on the ground floor emerged, containing a library, vitrines and a space for screenings, continually open to new encounters. After "Balzac Nouvelle Vague" by Dominique Gonzalez-Foerster and Tristan Bera and "l'amour en e majeur" by Jean-Michel Wicker, Heike-Karin Föll and Gregorio Magnani, Egija Inzule, Tobias Kaspar and Hannes Loichinger present the next chapter "The Money Plot".

For further information and images:
Isabelle Messina 0041 442721515 or e-mail messina@kunsthallezurich.ch