Robert Therrien's solo show will feature a selection of seminal sculptures and will include a major new installation work entitled Transparent Room. The group show "Time out of mind" will examine a new form of drawing that purposely explored the concept of temporality, works by Conrad, Lewitt, Matta-clark, McCall and Rockburne. 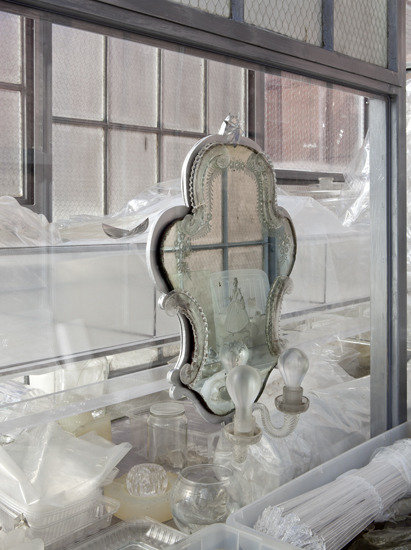 Sprüth Magers Berlin is delighted to present an exhibition of work by American artist Robert Therrien. The artist’s second exhibition at the Berlin gallery will feature a selection of seminal sculptures and will include a major new installation work entitled Transparent Room, 2010.

In the early 1980s, Robert Therrien became known for transforming simple, generic objects from his own environment into sculpture using a variety of media including copper, wood and bronze. While the depicted objects made from templates were ‘universal’ and recognizable to all, the subject matter of Therrien’s work often derived from personal childhood memories such as the nostalgic Dutch doors of his grandparents’ house to a lonely coffin evoking early deaths in his family, all of which were reinvented into concrete form. Indeed, the artist would use the term ‘narrative’ in relation to his work, which is often animated & playful, evident from the sculptural work, No Title (Black Cloud), 1995. Reduced to such simple & sinuous forms, No Title (Black Cloud) perfectly illustrates the artist’s interest in comics & cartoons and the menacing quality of the work lies in the unpredictable nature of the cloud. Characteristic of Therrien’s sculptures, No Title (Black Cloud) is displayed in pristine isolation without a frame or a base, generating its own physical space. The artist began experimenting with scale in the 1990s and the smaller and more private referents of the 1970s and 1980s had given way to drastically magnified subjects destined for the public domain. It is likely that this transition was fuelled by the artist’s use of the Polaroid camera to photograph setups in his studio, blurring the conventions of framing and spatial depth and thus inspiring Therrien to re-imagine the scale of his works. Furthermore, photography provided the opportunity to explore the multiple viewpoints of the sculptures in situ within an enclosed environment in order to find the ‘perfect perspective’.

In addition to scale, the artist’s attention also turned to the functionality of objects and recurrent motifs include tables, chairs, plates & saucepans which derive from a well known repertoire of manufactured goods and furnishing first produced in the early to mid-twentieth century, collected by the artist over the years. Upon entering Sprüth Magers Berlin, the viewer is at once confronted by No Title (Folding Chairs, Green), 2008, four sets of colossal and fully functional folding chairs, conspicuously leaning against the gallery walls. The familiarity of the mass-produced, stainless steel chairs is instantly counteracted by the uncannily large scale of the works, offering the spectator a new way of seeing familiar forms while, at the same time, creating an unsettling sense of disorientation and dislocation from reality.

The new installation work, Transparent Room, 2010, featured in the main gallery, presents the viewer with yet another fantastical, fictional world. However, unlike Therrien’s earlier work, the found objects housed in the room remain untransformed & life-size. Here, the uncanny sensation experienced by the viewer is provoked by the fact that each individual object is consistently devoid of colour. Furthermore, although there is a door, one is unable to physically enter the room, reinforcing a disquieting feeling of inaccessibility. The only insight into the artist’s archive of hidden objects is gained from peering through the windows, which are slightly ajar, and therefore, the viewer remains on the threshold between reality and fiction. The array of delicate glass trinkets, the ornate mirror and the abundance of jars & vases vividly demonstrate the artist’s longstanding interest in collecting found objects from the real world with the view that, one day, they will be reinvented into sculpture, creating an unreal world.

Sprüth Magers Berlin is delighted to present a group exhibition of work by artists Tony Conrad, Sol LeWitt, Gordon Matta-Clark, Anthony McCall and Dorothea Rockburne. Presenting work from the 1970’s, the exhibition will examine a new form of drawing that purposely explored the concept of temporality. Through the works on display, the way in which they are presented, and the original ideas they propagate, the exhibition attempts to transpose the visitor to a New York gallery in 1973.

The title "Time Out Of Mind" is taken from a song by the American rock band Steely Dan, which featured on their 1980 album ‘Gaucho.’ The song’s subtext is about the use of heroin. Many users describe the state of mind heroin creates as a complete escape from everyday reality - almost an out of body experience - hence the feeling of spending ‘time out of one's own mind’. In this exhibition at Sprüth Magers Berlin, five artists similarly attempt to escape from reality and expand their minds through alternative approaches to art making and in particular, drawing.

The simple idea of drawing has always been a basic artistic practice. However, in the 1970’s, artists began to break away from the two dimensional everyday reality of drawing by confronting the concept of temporality. A collection of artists living and working in New York at the time, engaged in a lively exchange of ideas, turned their attention away from the representational properties of drawing, focusing instead on the technical and performative aspects of the art form.

One of these artists, British-born Anthony McCall (b.1946), is today internationally recognized for groundbreaking work which occupies a space between sculpture, cinema and drawing. The artist first took up filmmaking after moving to New York in 1973. The use of film allowed McCall to record performance works, which, in turn, led to an increasing interest in the medium of film itself, and the idea of making films that existed only in the present tense. McCall’s performance drawing Five Minute Drawing, first realised in 1974, takes place in actual time as the viewer observes the act of creation. Using a string previously blackened with graphite, the spectator watches the artist trace an arc onto sheets of white paper mounted in ascending order on the wall. The work illustrates McCall’s investigations into the representation and incorporation of time and specifically his concern with duration.

Tony Conrad (b.1940) similarly experiments with a variety of mediums, and is recognized as an experimental film maker, composer, musician and sound artist. Conrad’s work seeks to bridge the gap between institutional and discursive practises of art, film and music, borrowing from one to challenge the preoccupations of the other. Time is central to the musically informed suite of photo corners on paper, presented in the exhibition. A temporal order is implied through the physical layout of the five collages, which parade across the wall, reflecting the structure of a musical score. The sequential aspect of Conrad’s collages draw attention to the issues of production, performance and viewing.

Sol LeWitt (1928-2007) is widely regarded as one of the leading exponents of Minimalism and Conceptual art. His experiments with architecturally scaled wall drawings began in 1968 and were considered radical due to the purposeful temporality of this new form of drawing. According to the principle of the work, LeWitt’s wall drawings are a performative act, carried out by installers other than the artist, using set guidelines and simple diagrams. As with McCall’s Five Minute Drawing, the technical, performative aspect of the work is equally as significant as it’s representational value.

Similarly incorporating his interest in architecture in to his artistic practise, Gordon Matta-Clark (1943-1978) is best known for those works in which he dissected existing buildings, cutting into and opening them up. Originally trained as an architect, Matta-Clark converted buildings into gravity-defying, disorientating walk-through sculptures. On view will be cut drawings relating to the artist's 1973 project entitled A W-Hole House, a square red-tiled house in Genoa, Italy, to which Matta-Clark added an atrium and, inside, a series of parallel horizontal slices. The hefty drawings of empty space have been created by the incision and removal of the material from the stucco and cardboard blocks. Matta-Clark labeled these drawings ‘Datum Cuts’, using them to give permanent expression to his difficult vision.

Canadian artist Dorothea Rockburne’s (b.1932) primary medium is paper of all kinds, from carbon and kraft paper to vellum and papyrus paper. Rockburne’s experiences as a dancer have informed her approach and developed her conception of art as a process, while her studies in mathematics and physics have also been a source of inspiration. The works on show reveal how, in creating a piece, the artist is guided by the properties of the material. Conservation Class #5 and Conservation Class #9 (1973) are self-generated drawings created by folding and mutilating the paper itself according to a geometric rule.

The purposely temporal actions of the five artists featured in the exhibition propelled the old fashioned concepts of drawing into a new time and state of mind not experienced before in Art history.