L'ennui / Smaller New York. Endowed with an ingenious way of seeing and inspired by a wonderful hour, an hour in which the light of the sea, of the sky and the beach reach nearly the same intensity starting to turn monochrome, Klocker brings time to a stand still and shows us fermatas and breaks. Nelson's project explores different notions of scale, firstly by presenting work that will for the most part be physically smaller than usual, and also by presenting artists who have not exhibited in Paris and whose reputations are thus smaller there. 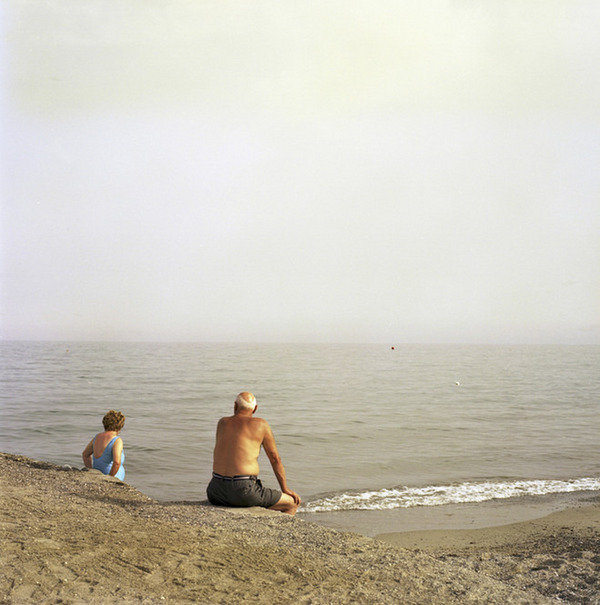 Far away — so close.

A perfect day at the sea. A perfect day in the studio. Gerhard Klocker shows us distillates that couldn’t be more dense, unyielding or ethereal. Endowed with an ingenious way of seeing and inspired by a wonderful hour, an hour in which the light of the sea, of the sky and the beach reach nearly the same intensity starting to turn monochrome, he brings time to a stand still and shows us fermatas and breaks. Titled “L’Ennui” (boredom), Gerhard Klocker’s 9-part-photographic work came to life in the afternoon hours of one September day on the coast of Liguria, not far from French border.

Is boredom genuine, or does it rather refer to an absence — and if so — an absence of what? Maybe the absence of a verb? With “L’Ennui” Klocker turns boredom into one of the most beautiful, meaningful and finest subjects imaginable. It’s not the boredom of Sunday afternoon strolls, it’s boredom as a form of pleasure. Contrary to Schopenhauer for whom happiness was lack of boredom, boredom here means a state of lasting happiness. In fact, Klocker’s works show us, albeit in different ways, that there are ways to get out, to escape the frenzy of a rigorous and unrelenting consumerism. They contribute, quite extraordinarily, to the world’s deceleration. They allow us to breathe, delightfully freeing us from old and new myths, and they convey a sense of time that’s nearly indescribable.

The verbs recede and fade out, physical efforts and tensions visibly decrease, mental and sensory skills are tucked away, and everything seems strangely shifted, revealing a dimension that touches on the ultimate principle of human existence. What’s so moving in Klocker’s works comes less from the specious emotiveness of a uniquely captured instant, but rather from something profoundly human: his works relate life’s inexorable, fragile and vulnerable side, and with their weight they defy monotony, callousness, small-mindedness and “fatal boredom”. It’s as if the artist wanted to relieve the world of it’s abysmal gravity, and restore the lightness it had forever carried. It feels as if one looked through a window and saw the world’s dissonances blending into harmony, a wholeheartedly serene.
Thomas Schiretz (translation by Frank’s)

In partnership with other Parisian galleries, emerging NYC artists will exhibit site specific installations in carefully prepared exhibition spaces within partner gallery’s spaces. The project primarily provides a unique and unusual aesthetic experience for individual viewers while tangentially raising questions of how notions of scale are at play in the artworld in the form of gallery, curator and artist reputation.

The project explores different notions of scale, firstly by presenting work that will for the most part be physically smaller than usual, and also by presenting artists who have not exhibited in Paris and whose reputations are thus smaller there. Furthermore, by collaborating with a range of other exhibition spaces, the project is also able to call attention to the way in which the sizes of different gallery’s reputations influence the works they contain.

But perhaps most importantly, « Smaller New York » provides the gallery-going public an opportunity to experience a sense of wonder by providing a new lens through which to view the work of these artists. The unusual setting and context of the work directly makes use of the perceptual faculties of the viewer to challenge assumptions and reawaken dormant curiousity in the world around us.

Nelson’s diverse artistic practice frequently involves bringing overlooked elements of our constructed environment to our attention. Pipes that carry the water we need, electrical conduits that provide the light and energy we consume, vents that circulate the air we breath — these banal, everyday necessities of built spaces are brought to light through subtle, simple, and often playful interventions. In render- ing these elements visible we are reminded of our physical connections with the spaces we occupy. But Nelson’s concern isn’t merely architectural in nature. In pointing out our physical interdependencies with space she tacitly points to the construction of social space as well. A large aspect of her work involves the interactions that occur in social spaces, how people relate to the spaces around them, and how spaces in- fluence how they relate to each other. Her work makes frequent use of interviews and conversations with local inhabitants, responding to specific individual’s ideas of where they live, work and play. These con- cerns have produced a wide range of projects, from large public billboards to small guerilla interventions of treehouses in urban spaces, absurd proposals for massive development projects to simple gestures that point out overlooked architectural embellishments. As she writes “By encouraging interaction andby bringing attention to our expectations of the places we move through everyday, I hope to encourage analysis and insights about both concrete and social structures.” Jo Q. Nelson is a recent graduate of New York’s renowned Hunter College, where she received an MFA in combined media. She has shown her site specific installations in numerous American galleries, including Smack Melon, Fluxfactory, and Scaramouche, and participated in numerous residencies and festivals. In 2008, as part of her interest in the intersections between art and social practices, she created Softbox, a residency program and temporary exhibition venue in Queens, NYC. Most recently she has completed a residency at the Vermont Studio Center, and participated in Revision Peripherique, a group exhibition at Projective City in Paris.

« Projective City » aims to advance, promote, and make visible the work of emerging artists through an on- going, flexible and interconnected series of projects. Working on the assumption that bigger is generally worse, projects are for the most part designed to be smaller-scale and more intimate, aiming for more personal encounters between artists, artworks, and audiences.

Projective City is “projective” not only in the sense that it is loosely structured around a series of ongoing “projects”, but also in the sense that its artists often involve projections of or into other possible worlds. Their practices generally involve an intricate balance of imagination, rigorously developed techniques, and labor-intensive processes. We currently promote contemplative gestures towards the romantic, the absurd, the dismal failure, the mysterious, the inarticulate, the sentimental, the vaguely remembered, the attempted, the invisible, the foolish, the aporetic, and the sublime.