Solo show. The pieces presented, mostly small-scale objects, drawings and photographs, celebrate the paradox of the replica as visitor attraction and the nostalgia that surrounds it. 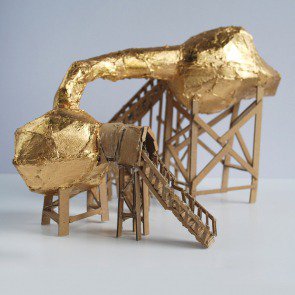 Bridgette Ashton’s work looks at places and narratives, sometimes real and at other times invented. Her mostly small-scale objects, drawings and photographs are often flagrantly wistful, celebrating pastiche and melancholy while simultaneously identifying ambiguous networks and relationships. At times her work retains indications of materiality and process, sometimes alluding to the obsessiveness of the hobbyist.

Over the past year as a PVAC Associate artist she has been developing ideas surrounding redundant or overlooked sites, objects and archives. Recent works look specifically at two speleologically important (but geographically and historically different) underground caves – one in Margate, Kent and the other in Plymouth, Devon. Neither of the cave locations allow public access and both are in danger of dereliction.

The pieces presented at Plymouth Arts Centre celebrate the paradox of the replica as visitor attraction and the nostalgia that surrounds it. The scale models and accompanying commemorative guidebooks serve as proposals for unachievable spectaculars.

This is the second in a series of exhibitions which documents the work of seven artists and curators who have taken part in Plymouth Visual Arts Consortium’s Associate Scheme. The PVAC organisations who have hosted an Associate include, Groundwork, i-DAT, KURATOR, Plymouth College of Art, Plymouth Arts Centre, Plymouth City Museum and Art Gallery and Zest.

This exhibition is on Plymouth Arts Centre’s first floor, which is only accessible by stairs.