Each of Cuerdens paintings suggest a childhood secret or significant experience like an illustrated diary of events - some scenes posses an eerie nostalgia and ambiguous narratives. 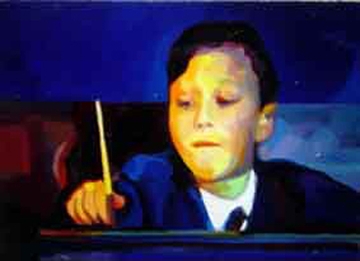 From February 7 to March 4 Vertigo presents new works by Richard Cuerden in his first solo exhibition at the gallery.

Cuerden produces immaculately finished paintings, their glossy surfaces, small formats and subject matter akin to family photographs, yet beneath this polished surface lies a more complex truth. Each of Cuerdens paintings suggest a childhood secret or significant experience like an illustrated diary of events - some scenes posses an eerie nostalgia and ambiguous narratives.

He appropriates images from a wide range of media including print and film, re-working them as his own and using them as clues to his directly personal experiences. Cuerdens use of cinematic devices, in particular, dramatic lighting, deep shadow and cropped frames lends the works an important intimacy, drawing the viewer in and inviting them to share in the artists secrets.

The strong sense of authorship enhances this intrigue, the viewer peers into each as if spying on someone elses private moment. Despite their personal nature, the images have a universal pull, prompting the viewer to remember his or her own childhood experience and the way in which they regarded the world around them.

Richard Cuerden trained as a dancer and spent much of his early life performing on stage in West End musicals. He left the theatre to study art at Winchester School of Art and then painting at the Royal College of Art, graduating with an MA in 2000. He has since exhibited widely in London and abroad, significant shows have included 1999s New Contemporaries, the Becks Futures student video awards and earlier this year Bloomberg Space and Ibid Projects. His work features in numerous collections both private and corporate including the Parallel media collection and the collections of Mario Testino and Gillian Anderson. He has recently been commissioned to paint a portrait of the actress Gillian Anderson for the National Portrait Gallery, London.