Witches, myths and realities. Devils and demons have left their infernal habitat and established their abode at the Adresse Musee de La Poste for four months. The exhibition begins with the imaginary aspect of witchery in art from the XVIIth to the XXth centuries, because sorcery is not a relic from the past... Curated by Patrick Marchand. 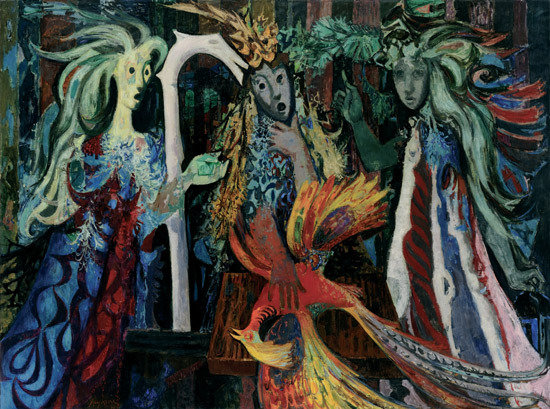 Devils and demons have left their infernal habitat and established their abode at the Adresse Musée de La Poste for four months. Their spoke « persons » are their usual henchpersons, the witches. Why witches and not sorcerers? Because, as we all know, evil is feminine. A very straightforward popular proverb reminds us «Between a woman and the devil you must chose…but think carefully! Entre femme et diable, choisis… mais réfléchis ! ». History confirms this identity between woman and demons: 80% of the trials on witchery in the XVIth and XVIIth centuries - a period of high epidemics of witchery - concern women.

The exhibition begins with the imaginary aspect of witchery in art from the XVIIth to the XXth centuries. Dutch artists and modern painters represented a multitude of times Sabbaths and scenes of exorcism. Then came the works by poster artists announcing movie masterpieces such as La beauté du diable (Beauty of the Devil) by René Clair (1949). Among the models of the decors made for the movies at the beginning of the century there is a Devil drawn by Georges Méliès himself. The visitor then discovers the tragic history of witches, those women who were condemned based on a rumor or their bad reputation, at a time when the Western world was shaken by natural disasters (black plague in 1348), the 100 Year War, heresies and religious wars. During the XVIIth century, in the midst of the century of Reason, hundreds of witches were sent to the stake at the end of a rushed trial led by judges who were obsessed with the Devil. We can follow the incredible trial of the witches of Labourd (Basque country) in 1609 through the eighteen paintings done in 1938 par by José Gonzalès de la Peña.

Louviers, Loudun and the matter of the poisons

The visit continues with a few cases that caused a lot of commotion throughout France, from Aix-en-Provence (1601) to Louviers (1643) passing through Loudun (1634). These cases were real scandals for they involved priests, keepers of conscience who were accused of having abused nuns. Witchery, under its aspects of possession by the devil, had slipped into the convents. In the judicial chronicles of Paris we can also read about the case of the poisons (1670) that shook the Royal Court for it involved persons in high positions in the Kingdom. 1682 marked the end of the witch trials but the problems with witches were not over. The stakes have been turned off but the practice of witchery remains very much alive in the provinces for we believe, deep inside, in the efficiency of curses and bewitchment.

Following the imagery linked to witchery and the sad truth of the historical trials, the visitor reviews the French countryside, from the XIXth century to the fifties, in the midst of objects reminding us either of our superstitions, or of the «practice» of sorcerers. We could draw up an inventory on the «patrimony» of witchery, given its haphazard representatives: talismans, amulets, reliquaries, scrawls, «thunder stones» to fight the storm or «poison stones» to cure many ills, toxic or hallucinatory plants, different objects invested with a magical power used to protect as well as to cast a spell. We are frightened by these figurines in the effigy of a person, planted with needles in the area where the magician wishes to cause pain. We are terrified by the figures of the devil manufactured by artisans for a «witch» from the Creuse region who turned art into a real business. That was back in the forties. It is today. Witchery is not a relic from the past…

Musee de la Poste
boulevard de Vaugirard 34 - Paris
Hours: Every day from 10 AM to 6 PM, except for Sundays and holidays.
Thursdays until 8 PM.
Admission: Full rate: 6.50 €; Reduced rate: 5 €
Free admission for children under the age of 13.
Admission gives the right to visit the permanent collection