In the solo show 'Light in Graphite', original drawings by Yelin from the French picture fairytale Le Visiteur (2004) will be shown. 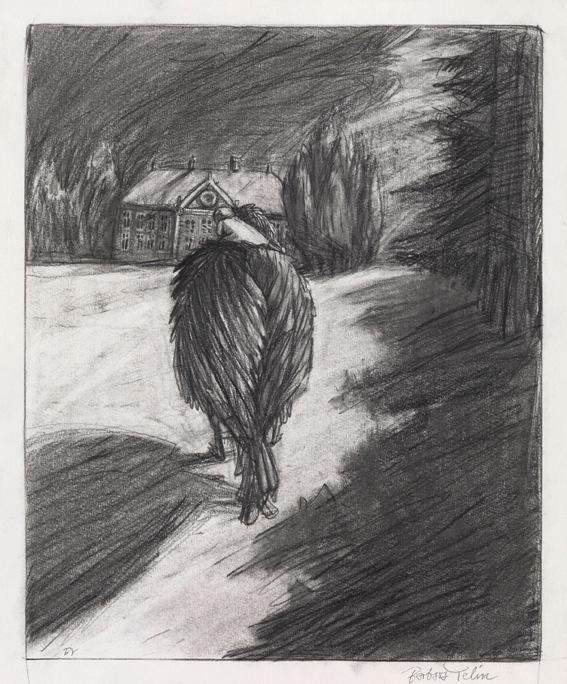 Barbara Yelin‘s pencil drawings are characterized by her powerful way of setting the line, which creates figures and their specific scene in a masterly way. Each line she creates stays in the picture as an individual element so that in her drawings several layers of black lead lie on top of each other. Besides her preferences for the colour black Yelin also applies tender lines of gray, partly faded, to the white sheet of drawing paper. Thus Barbara Yelin creates enchanted sceneries and intensive, filigree emotional worlds, which are rarely found elsewhere.

In the exhibition Light in Graphite, original drawings by Barbara Yelin from the French picture fairytale Le Visiteur (2004) will be shown. Without a single word, and only through the use of a pencil, the illustrator tells the story of an encounter between a little girl and a giant raven. Graphic worlds are created in which light and dark, delicate and dramatic all find a place. Through the meeting of these two dissimilar beings, the story turns into that of a touching friendship.

Barbara Yelin (born 1977 in Munich) studied illustration at the Academy of Applied Sciences Hamburg. She has lived and worked as a comic illustrator in Berlin since 2004. Yelin’s publications include the following books misplaced in France: Le Visiteur (Editions de L’An 2, 2004) and Le Retard (Editions de L’An 2, 2006). The artist is best known for her graphic novel Gift (Author: Peer Meter, Reprodukt, 2010), which was nominated for the Max and Moritz Prize. Most recently, the Art Comics Albrecht Dürer and Vincent Van Gogh (Author: Mona Horncastle, Verlag Prestel Junior, 2011) were released. Since 2005, Yelin has co-published a comic anthology entitled Spring – the „Magazine for Illustrators“. Barbara Yelin has been awarded many prizes, including the Sondermann Prize for „Best Newcomer 2008“ at the Frankfurt Book Fair. The artist and illustrator will hold a guest professorship in Comics/Graphic Novels for the winter semester 2011/12 at the Academy of Fine Arts Saar in Saarbrücken. Just recently, Barbara Yelin created an online comic travel diary at the invitation of the Goethe Institute in Cairo.

Ida Illuster is the first Berlin gallery which focuses on illustrations from picture books. With a selection of exceptional, outstanding artists and illustrators gallery owner Ursula Kleuters wants to encourage a dialogue on the development of our image culture. The gallery’s main focus is original works on paper which are based on a specific narrative format.

An artist’s talk with Barbara Yelin will take place on Saturday, the 10th of December, 2011 at 5 p.m. in the Galerie Ida Illuster.