Il Villaggio / The Village. For this presentation the artist has added a number of unpublished images to the 50 photographs of the original series, which has been on public display only once before at the Biblioteca Civica d'Arte Poletti in Modena. 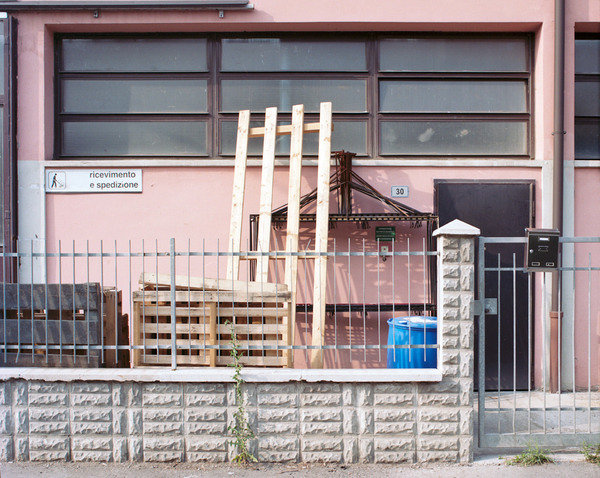 Arranged in cooperation with the artist, this Die Photographische Sammlung/SK Stiftung Kultur exhibition features the project Il Villaggio/The Village realized in 2009. For the presentation in Cologne, William Guerrieri (*1952) has added a number of unpublished images to the 50 photographs of the original series, which has been on public display only once before at the Biblioteca Civica d’Arte Poletti in Modena. Since the early 1990s, the Italian artist has focused on documenting interiors, such as offices, reading rooms, corridors or entrances, although his interest also encompasses architecture and landscape. His photographs are always grouped in series but his presentations may additionally include historical images by other photographers or related materials such as objects discovered at the scene or found in archives. While his color photographs capture the status quo of an encountered situation with detachment and precision, the act of linking them with historical archive material or everyday items creates a complex of works that points to the history of a place, reflects on its successive phases of development and raises questions about living with memories. In the project Il Villaggio/The Village, William Guerrieri conducts a photographic exploration of a defined site: a formerly independent artists' and artisans' village that has now been incorporated into the North Italian city of Modena.

Founded in 1949 by the mayor of the time, Alfeo Corassori, the village was stocked with buildings designed in 1953 by architect Mario Pucci. The idea was to bring workplace and home as close together as possible. And the concept seemed to work. Within years, more than 70 craft enterprises and small firms were established in the village. Over the ensuing decades, the settlement changed; manufactories came and went, and both product range and methods of production were modernized in line with economic conditions. These developments are reflected in changes in the landscape, buildings and interiors, and ultimately also in the social structure of the place – changes brought about by a dynamic, interdependent process that can be observed in many industrial towns and nowhere better than in Il Villaggio/The Village. In 2009, fifty years after the village was established, William Guerrieri set off with his camera in search of traces of the past. With the trained eye of an archeologist peeling back layers of history, seeing every object found, no matter how small or inconspicuous, as a witness of its time, Guerrieri repeatedly spots clues to the past and its many different phases and facets.

The discovery might be a detail, for example, like a photograph of two men hanging on a wall, which Guerrieri captures, as it were, as part of an assemblage of everyday life. But the finds are not always physical objects; the photographer's attention may also be drawn by architectural transformations. One night-time photograph, for instance, shows two buildings bathed in artificial light. Evidently now night spots, they are unlikely to have been designed as such when they were first built. Their obvious conversion makes the scene look almost like a film set. There is no one to be seen far and wide; the place is quiet and enigmatic. For all the documentary matter-of-factness of Guerrieri's photographs, they also convey an atmosphere, one that prompts thoughts about the life of the locality today and in the past. Alongside his own photographs in Il Villaggio/The Village, the artist has added cuttings from a number of 1950s advertising brochures as well as the 1961 publication First Day of the Artisan Village. The latter contains not only photographs and drawings but also a list of all the businesses operating in the village, including telephone numbers, addresses and maps. Parts of the two brochures are displayed in the exhibition on monitors.

Since 2001, William Guerrieri has been the coordinator of Linea di Confine, an organization based in Rubiera and devoted to documenting the structural transformation of the North Italian region of Emilia-Romagna in photographs. In 2007, Die Photographische Sammlung/SK Stiftung Kultur presented a selection of the extensive Linea de Confine collection of photographs in an exhibition entitled Trans Emilia, curated by Fotomuseum Winterthur. In this context, Guerrieri made photographs in 2006 along the Bologna-Milan rail link, which was under construction at the time. (Where it was). Other projects: Ambienti pubblici/Public Spaces, 1991-1993, 1994; Oggi nessuno puó dirsi neutrale/Heute kann sich niemand mehr neutral nennen/Today nobody can call himself/herself neutral, 1998; Oppositions, 2000. Publication: Il Villaggio/The Village, ed. Linea di Confine, Text by Antonello Frongia, Rubiera 2009 Upcoming event: Guided tour by William Guerrieri on Saturday, 3 December 2011, 3 p.m. http://www.sk-kultur.de/web/edit/programm.php?id=1882