For this first comprehensive presentation of Slovene painter and printmaker, who donated her oeuvre to the International Centre of Graphic Arts in 2010, one hundred fine art prints and matrices as well as four drawings have been put on show. 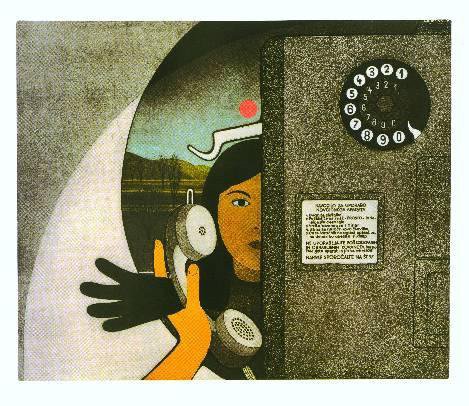 This is the first comprehensive presentation of Slovene painter and printmaker, who donated her oeuvre to the International Centre of Graphic Arts in 2010. One hundred fine art prints and matrices as well as four drawings have been put on show.

From the initial idea to the print, my journey is like this: first, I record the subject I notice in a quick sketch; then I organize the composition to make the idea clearer; after that, I make the final drawing and start working on the plate. I should stress that, even as the idea is occurring to me, I also get a sense of the technique I will use to realize it. Of course, in the process of making the work, there are many things I might add or subtract. The creative process continues right to the very end, even during the printing. Nothing is mere routine. There are only the laws of the materials and tools in service to the idea. (from the interview in the exhibition catalogue)

Tinca Stegovec is a Slovene painter and printmaker, a member of the Ljubljana School of Graphic Arts.
Last year, she donated her entire printmaking oeuvre together with matrices and four drawings, as well as a large portion of her professional library, to the International Centre of Graphic Arts. The exhibition at MGLC is the first comprehensive presentation of the printmaking oeuvre of Tinca Stegovec and verifies her place in the history of modern Slovene printmaking, in which the excellence of her colour aquatints was not fully recognised in the past. In addition to her aquatints, the display also includes woodcuts, lithographs, etchings, vernis mou, matrices and drawings. The exhibition was curated by Breda Škrjanec.

The life's work of Tinca Stegovec is multifaceted and complex. She is not only a painter, printmaker and illustrator, but has also dedicated a large part of her life to teaching work, journalism, translation and travel. She was born in 1927 in Planina pri Črnomelju. She had her first solo exhibition of prints and wash drawings in 1954 in Ljubljana’s Small Gallery (Mala galerija). From her first job at the grammar school in 1952 and up till her retirement in 1978 she was involved in pedagogical work, undergoing constant further training in art theory and through her study trips across Italy, France, Switzerland and Greece. She became established as a printmaker in the sixties. In 1963 she received a six-month scholarship to study in Paris and decided to take up intaglio printmaking in the Atelier 17 studio with Professor Stanley William Hayter. The Paris scholarship represented a wished for professional departure into the world, whereas the Parisian studio gave her much technical knowledge as she was able to use it to experiment with various combinations of printmaking techniques. In 1966, she held her first solo exhibition abroad, followed by a busy exhibiting period, with a particularly resounding solo show in 1969 in Mala galerija, where she exhibited twelve relief etchings with aquatint and vernis mou. In 1976 she received the Prešeren Fund Award. One of her most resounding prints “The Call” (Klic) was created in 1978 and received a silver award in Paris in 1985. She abandoned printmaking for health reasons after 1988 and devoted herself to drawing and painting.

The prints of Tinca Stegovec largely comprise of images that are extracts of life and life situations. By mixing the printmaking techniques of etching, aquatint and vernis mou she achieved her technical and creative peak. Tinca Stegovec, a highly figurative artist, is a subtle observer of the world around her and interpersonal relations. Her works are deep personal stories, characterized by a deliberate choice of subjects and carefully selected visual means.