The artists included in this exhibition have a particular interest in revisiting and reinterpreting the various mythologies and cliches associated with Brazilian culture.Thus, a body of works revisits and reinterprets anthropophagic and abstract-geometric artistic legacy. Other works highlight territorial and geographical concepts, connecting with landscapes, architecture and specific characters from different places. 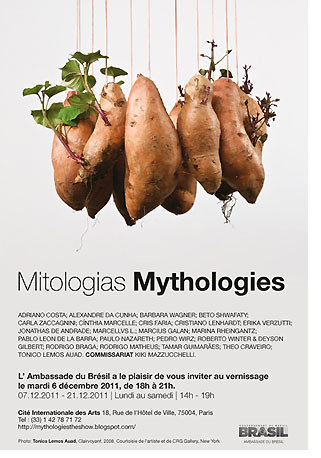 In the last decade, contemporary Brazilian art has achieved an international prominence that is unheard-of in its history. It has been in this period that some of the most renowned institutions in countries such as the United States, France and England have held retrospective individual exhibitions for historic artists such as Lygia Clark (Nantes, 2005), Cildo Meireles (London, 2008) and Hélio Oiticica (Houston and London, 2007). Contemporary Brazilian art was also the theme of important group exhibitions and festivals such as Tropicália, curated by Carlos Basualdo, which was presented in Chicago, New York and London (2006).

Growing international interest in Brazilian art was also apparent in the major international art fairs such as ARCO in Madrid and Frieze in London, which today feature several Brazilian exhibitors. The presence of Brazilian artists also increased noticeably among the European and North American galleries. In this same decade, Brazil reached an unprecedented economic stability, whilst Europe and the United States are facing a period of crisis, which undoubtedly contributed hugely to the growing interest in Brazilian culture.

Today, Brazil is experiencing a development boom comparable to its growth in the 1950s and 60s. It was precisely in this period of significant cultural effervescence in the country that artistic movements, theories and expressions flourished in various fields of knowledge, which ultimately became representative of Brazilian culture as it is internationally known today: the architecture of Niemeyer and Bo Bardi, the artistic experiments of Clark, Oiticica and Pape, the Paulo Freire method of education, the bossa nova, among many others.

In the current context, where the more established Brazilian artists are reasonably well represented by the major international institutions, there is an institutional space to be filled by the work of emerging Brazilian artists, which still has limited exposure. One of the aims of the exhibition ‘Mythologies’ is to present a sample of this young work, raising relevant questions on the position of Brazilian art on the international circuit today, at a time when Brazil is experiencing a period of economic prosperity as significant as that of the 1950s and 60s.

The exhibition ‘Mythologies’, which borrows its title from Roland Barthes’ renowned book, takes as a starting point issues relating to identity and cultural hybridism which are at the heart of Brazilian modernism, reflecting upon the processes that led Brazilian art to achieve international recognition today. In a ‘role-reversal’, Brazilian art is now ‘cannibalised’ by foreign artists who appropriate its symbolism, its strategies and its aesthetics.

The artists included in this exhibition have a particular interest in revisiting and reinterpreting the various mythologies and clichés associated with Brazilian culture, recapturing and updating concepts that are fundamental to our modernity, creating mythical images based on contemporary experiences or demystifying folkloric images and exploring the expanse and heterogeneity of the Brazilian territory. Thus, a body of works in Mythologies revisits and reinterprets our anthropophagic and abstract-geometric artistic legacy. Other works highlight territorial and geographical concepts, connecting with landscapes, architecture and specific characters from different places. There are also works that look more specifically at political and economic aspects, crossing the timespan that separates the two major periods of Brazilian development, 1950/60 and 2000/10.

As such, ‘Mythologies’ does not propose a generational selection that seeks to exhaustively identify a ‘new contemporary Brazilian’ art brought together in a group show. On the contrary, the exhibition aims to include works by artists from different generations and geographical regions that cover topics related to one of the hundreds of mythologies associated with Brazilian culture. An attempt was also made to create a heterogeneous group that included artists from the various regions of the country as well as those living abroad - a group that is constantly expanding and whose work is becoming increasingly important for an understanding of Brazilian art today.

This project was initiated by the Brazilian Embassy in Paris.