Multikulti Sause. The exhibition consists of 7 monumental sized paintings, 2 photographic works and a series of drawings. Humorously melding different influences, she creates a exorbitantly individual portrayal of the everyday. 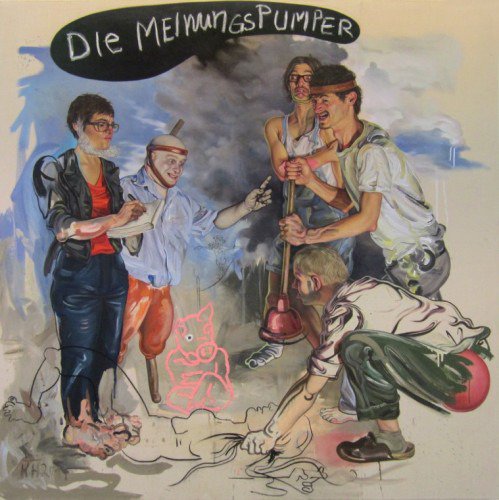 Tim Van Laere Gallery is pleased to present 'Multikulti Sause', an exhibition of new works by Kati Heck. The exhibition, the artist’s first solo show at the gallery, consists of 7 monumental sized paintings, 2 photographic works and a series of drawings. The title of the exhibition alludes to Angela Merkel's statement 'Multikulti ist tot'.

Kati Heck stages people from her immediate environment in her canvases with a heightened sense of drama and irony. Her paintings often display happenings she held during her journeys or in the artist's studio. Her whole gang is there, the local night shop owner, acquaintaces with a dress-up fetish, malicious old men, indie kids, her friends. The nude female form is depicted confrontational, almost in a softcore porn kind of way. Heck's protagonists are engaged in indeterminable tasks, making it challenging for us to figure out what they are thinking or in which mood they are in. Often they don't communicate with each other and seem to be in different time zones.

Combining a realistic illusionism worthy of the Old Masters with a sketchy and almost precipitous draughtsmanship, Heck undermines the pomposity of her amazing virtuosity as a painter. This way she balances her compositions both stylistically and iconographically. Humorously melding different influences, she creates a exorbitantly individual portrayal of the everyday.