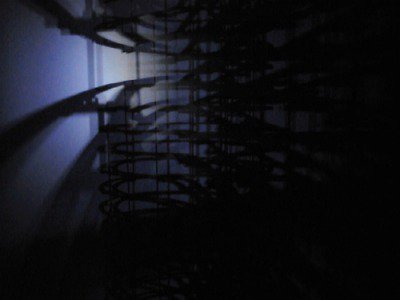 Experiment, research, invention and exploration - these are keywords for this year's theme of focus TECHNIQUES, MACHINES & METHODS - Artistic Processes of Image-Making, which has been developed by the curatorial Team at Fotogalerie Wien in collaboration with artist and photographer Thomas Freiler. Nowadays, with the seemingly final shift from analog to digital photography and now that photography appears to have become something that is "taken for granted" and is "easily accessible", artists who construct their own machines drawing upon old preindustrial methods and exploring basic photographic parameters are increasingly emerging. This three-part exhibition series focuses on the inventive and unorthodox artistic methods and processes in image-making.

When we look at a photo we see what is depicted there and rarely the object we have before us that shows us that image. Ever since the photograph was invented, the characteristic perception of the object it is has continued to retreat into the background. With a Daguerreotype we held a small silver plate in a velvet 'envelope' in our hands. Later it became a thick card, then a thin paper and, finally, it is reduced to light on a projection screen or computer monitor. With the title Spatial Translations series TECHNIQUES, MACHINES & METHODS focusses attention on the various forms of photographic presence. As a three-dimensional object, the form, material andthe technique employed for the photograph constructs potential images for a viewer. However, the apparent clarity of the photograph is undermined, and the individual image can be seen to be a fragment. After all, the photograph as an object with its own form is simultaneously the form of what it depicts.

Clemens Fürtler describes himself as a painter, draughtsman, constructor, video and installation artist. For example, from 1998 to 2005 he made a series of paintings that almost always show streets and roads - a concern with the forms of mobility in our modern world and the perception of the world generated by being mobile. The starting point of the video Clemens Fürtler is showing in the exhibition is an object he conceived and built, a railway system - Bildmaschine 03 (Picture Machine 03) - a closed loop that runs through many levels. However, we never experience the Picture Machine from an external point of view. A vehicle, equipped with LEDs as headlights, moves endlessly through the system projecting shadows on projection screen fabric. As it lights up curve after curve, level after level, with headlights, an impression of the whole is created by the shadows that are thrown on it and recorded by the video camera. The construction formed by the light cone and the projection of its shadow on the walls of the room in
which it stands - a construction reminiscent of the story of Plato's cave.

Manisha Jothady writes about Ilse Haider's work in the following terms: "In particular, the works in which she spans rattan in diagonals, verticals and horizontals across wooden panels which are both curved and flat, attract the attention of the viewer with a fascinating hologram effect that demands continuous repositioning in order to be able to perceive the depiction in its multi-level complexity. Haider creates an oscillating pictorial space here that is reminiscent of op art works." So it is not surprising that in Ilse Haider's oeuvre there is, along with sculptures from classical antiquity and portraits of film stars, also a portrait of Victor Vasarely on a wooden object with ground and rattan coated in photo emulsion. During her concern with the artist and his son - one of the co-founders of the "Groupe de Recherche d'Art Visuel" in 1960 - Ilse Haider has developed three-dimensional sculptures for the exhibition which use photographic processes.

From the technical standpoint, the works of Frauke Hänke and Claus Kienle have the use of gum bichromate prints in common. In this process the chromium salts are mixed together with gum arabic and colour pigment which is applied to the future image medium. After using a negative to make a contact exposure, the unexposed material can be washed out and the positive image remains in the pre-selected colour. At the turn of the nineteenth to the twentieth century these gum bichromate prints were the preferred technique of art photography. Frauke Hänke and Claus Kienle work with apparently inconsequential and non-representational photographs which have been taken while travelling. They themselves say that they are images which would probably not find their way into a photo album. It is only with the transfer they undergo, their transformation into a pictorial object and the ascription of a title that they open up to the viewer's individual interpretations and associations. Thus in Ay dedeye misafir olmak - Ich habe den Mond besucht by Frauke Hänke, for example, a cut out moon follows its orbit through a series of pictures.

Michaela Moscouw does not make photographs nor does she undertake the usual media-related actions and manipulations of the photographic material in order to depict things in her immediate surroundings. Instead, everyday furniture and objects are directly packed up in large sheets of photographic paper like parcels. She makes images of these, but not as a photographer would, with camera and film, but directly on the image-bearing medium, the photographic paper. After exposure the parcel is opened, unfolded and the provisional exposure is further processed. Ultimately it is mounted flat on a wooden panel. The final object is a large-format, convex, two-dimensional image which, with its surfaces, spots and lines of differing brightness and the folds and fractures of the photo paper, presents the viewer with traces of what is depicted. The photographed object is not represented by a photographed image but, rather, by indicators of the process of depiction on photographic paper.

Thomas Freiler and Petra Noll, on behalf of the collective

Finissage and Presentation of the catalogue TECHNIQUES, MACHINES & METHODS:
Thursday 26 January 2012 at 7:00 p.m.