An exhibition of new works by Kjartansson, exploring the most basic concepts of every true romantic, youth, love and death. 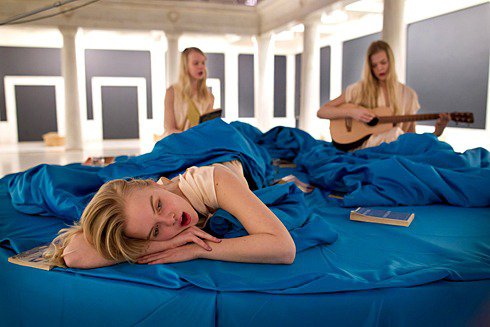 i8 Gallery is pleased to announce an exhibition of new works by Ragnar Kjartansson, exploring the most basic concepts of every true romantic, youth, love and death.

The video installation, Song (2011), is based on Kjartansson’s 2011 three-week performance, Song, in the Carnegie Museum of Art’s Hall of Sculpture. The work features Kjartansson’s three nieces, Ragnheidur Harpa Leifsdóttir, Rakel Mjöll Leifsdóttir, and íris María Leifsdóttir, performing a gentle folk song written by Kjartansson, for six continuous hours. The slowly circling camera adds to the hypnotic and eerie repetition of the singers.

For Song, Kjartansson was strongly influenced by the Carnegie Museum’s industrial age spirit and the Hall of Sculpture itself – a replication of the interior of the Greek Parthenon. Having previously devised the song from misremembered words of Allen Ginsberg’s poem Song, Kjartansson envisioned his nieces in this space, enacting this delicate hymn to love. Directly following more overtly "masculine" works such as The End (2009), Kjartansson was interested in the perceived softness and "femininity" of this imagined tableau. Empty and filled with changing natural light filtered through the skylights as day turned to night, the Hall would register a strange conflation of timelessness and the fleeting nature of experience with the girls’ voices echoing as they sang the central lyric: “The weight of the world is love”.

The video was shot over the course of the six-hour performance in one constant track-shot, using a technique invented by Ragnar's cinematic collaborator Tómas örn Tómasson. The camera movement can be felt through the visible frame rate, adding to the physical connection to the space. As the viewer watches, the spotlight turns into the moon; the artifice of production giving way to a hypnotic paean to beauty and love. With Song, Kjartansson continues to experiment with durational performance as seen in his Venice Biennial six-month studio performance, The End - Venice (2009); The Great Unrest (2005); Schumann Machine (2008); and most recently Bliss (2011), a 12-hour staging of The Marriage of Figaro’s finale at Performa 11.

From the Valley of World-Weariness in British Columbia (2011), is a group of watercolours made during a two-day hiking trip in a dramatic Canadian landscape of burnt pine trees. The setting had a visceral impact on the artist who notes that, “the valley was just like walking in a enormous symbolist installation and the paintings are souvenirs of that unreal place”. As in most of Kjartansson’s work, there is a performative element to the paintings, having been made ‘en plein air’, but perhaps more pronounced in them is the sense of isolation, as if they were created “under the burden of solitude”.