1978-1983. MACBA revisits what was a decisive moment both in the spanish history -the period of the transition to democracy- and internationally, as this is when photography began to penetrate the art market as never before.The exhibition comprises more than 600 photographs, including 220 vintage prints and nearly 400 slides. 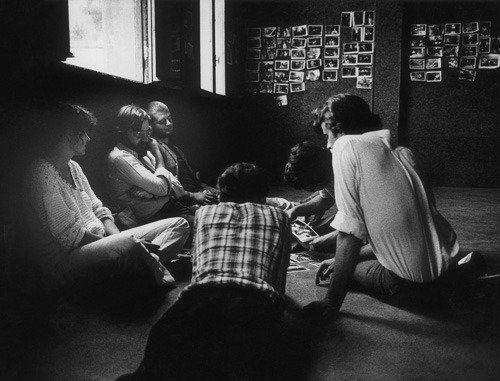 Barcelona International Centre of Photography (CIFB), a pioneering institution established by Albert Guspi and which played a major role in the field of photography between 1978 and 1983, forms an important part of Spanish photographic heritage. A mixture of film club, school, art gallery and debating forum, the centre, devoted to education, promotion and production, was an essential element in the debate about photography. Now, as a result of a research project, MACBA revisits what was a decisive moment both in our country’s history – the period of the Spanish transition to democracy – and internationally, as this is when photography began to penetrate the art market as never before.

The exhibition comprises more than 600 photographs, including 220 vintage prints and nearly 400 slides. As MACBA emulates habitual practice at the Centre of Photography in the Museum’s own exhibition space, these slides are projected onto the wall, just as they were at the CIFB. Moreover, the show also features previously unseen documentary material, including posters, magazines and other publications. When the exhibition at the MACBA Study Centre closes, these documents will be made available to researchers and the general public. The Museum will also publish a book containing photographs and other material from the period, as well as recent interviews with several photographers linked to the CIFB. Parallel to this, on February 22, exhibition curator Jorge Ribalta will present a tour and debate on the exhibition, whilst a round table will take place on March 22. The participants at the round table, entitled The Historicisation of the 1970s, will include Enric Mira, Marie-Loup Sougez and Carmelo Vega, and the moderators will be the exhibition curators, Jorge Ribalta and Cristina Zelich.