The theoretical premise of this curated project looks at practice that relates to the abstract notions of space through and beyond divergence, dissipation, or what might be described as the fulcrum between material partiality and/or a presence of partial materiality. On view installations, videos and sculptures by Uri Aran, Shane McCarthy, Anna Sagstrom. 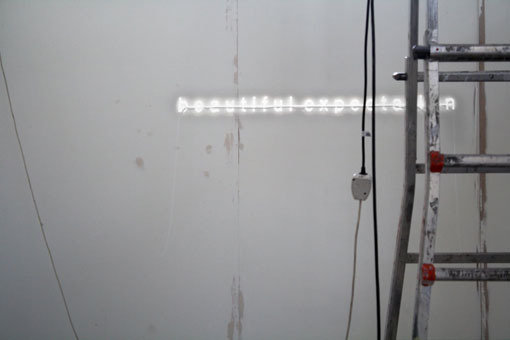 Between the idea
And the reality
Between the motion
And the act
Falls the shadow
(from the The Hollow Men. T.S. Elliot, 1925)

The title for the opening show of the 2012 season at mother’s tankstation, Beautiful Potential, is based upon a corruption of the title from one of the show’s premising installations; Beautiful Expectation, by Shane McCarthy (born Ireland, 1988). McCarthy’s eternally ‘incomplete’ installation (or more exactly; a carefully arranged sculptural installation about the poetry of incompletion or unfinishedness), attempts to deny the permanence of resolution by an apparent perpetuation of the possible. The text, Beautiful Expectation, appears to hover, luminously, somewhere just proud of the surface of a wall. Its intangible promise constituted by nothing (literally) other than pure light, neither the expected neon, paint nor applied vinyl, its diffused, auratic presence is, however surrounded by hard, real things, the objects and events of its creation; a stepladder, various scattered tools, an electric sander, a projector and other studio detritus. Although the work has of course ‘become’, its decisions and ultimate resolution being a thing of the past, it maintains the promise of the future in a continued present.

Similarly, all the works included in this curated project exist in this idealized, hypothetical (non)space; “Between the idea / And the reality…”. The extended theoretical premise looks at practice that relates to the abstract notions of space through and beyond divergence, dissipation, or what might be described as the fulcrum between material partiality and/or a presence of partial materiality.

In 2006, Uri Aran (born Jerusalem 1977, lives and works in New York) created two sculptures, both titled; Untitled, 2006, and made simply from breakfast cereal boxes, ‘Capt’n Crunch’ and ‘Rice Krispies’, respectively. These plain forms that allude to the monoliths of minimalism (and science fiction) have been given just sufficient alterations to transform them from their primary state/intention as commercialising (full/loaded) vehicles/vessels for breakfast cereals to (empty/loaded) vehicles/containers of art meaning. Resituated from the horizontal flat of the table, to the vertical flat of the wall they now hang like paintings and are otherwise adjusted with aestheticising stains, lacquer washes, collages and inscriptions. All of which oddly have the effect of amplifying the meaningfulness of the original printed images and texts, rather than denying or obfuscating them. Intriguingly, these simple ‘early’ sculptures by Aran have been so meaningful to the artist that since their creation and until now, they have been a permanent feature in his studio, and only latterly embark on a new stage of predestined contextual meaning, which may theoretically re-date their making from 2006-2012.

Anna Sagström’s (born Sweden 1985, lives and works in Berlin), When I Entered, Silent Aviation, is a short, projected, silent film shot from a hot air balloon with a fixed, immobile camera. The manually determined focus is set on one part of the landscape and the balloon then drifts the camera lens in and out of focus, moved by the wind, which beside the recording action of the camera, is the only other active element in the work. The flattening-off of focus, seems to compress space and accordingly alter the perception of passing time. A second work by Sagström, Alone Like An Animal, And Yet Think, explores, as the artists describes it; “… an ambivalence and distrust of communication and human confirmation and appreciation”. The installation centers on a polar tension between two elements; one physical but ephemeral; slender wooden poles stretched with attached, painted animal hides, the other invisible but audible, with a powerful, and almost greater physical ‘presence’. The sound presence takes the ‘form’ of a reconstructed recording of Neil Young’s classic album, ‘On the Beach’, from 1974, re-performed by a lone guitarist, recorded with a conscious studio ‘physicality’, a weight and presence which bears witness to the other missing instruments and the remembered communication of absent song lyrics. The audio is broadcast, invisibly, from a space adjacent to the main gallery.

Hence, each element of the exhibition may look or sound solid in the here and now, but the actuality of this apparent solidity, turns out to be ghostly hints of a past aspiring to a cohesive future, decisions that deny deciding, or ideas that dream of the beautiful potential of concretisation, and yet, regretting the necessary end to the dream, finding a way to exist in a shadowy perpetuation of limbo.

All my pictures are falling
from the wall where
I placed them yesterday.
(from, On the Beach, Neil Young, 1974)