"The Consoling Dream Necessity" showcases a new body of work by Danell geared toward a personal search for meaning, dealing with contemporary life as coloured by her Scandinavian heritage and upbringing. 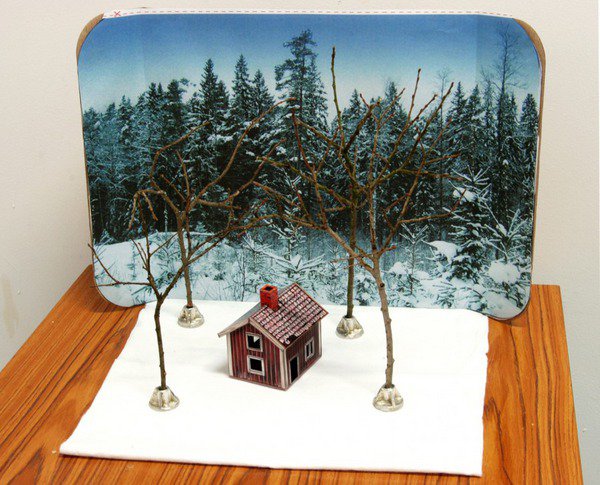 Cecilia Danell is a Swedish artist based in Galway. She has just been announced as the recipient of the 5th Annual Emerging Artists Award of 2011. Her work focuses on questions concerning, identity, dealing with such themes as perception of the self and sensations of otherness. Her media spans a spectrum of painting, photography and video, all of which are utilised toward making hazy the boundary between fiction and reality. The surreal quality of her video and photographic pieces is well complemented by the installation works consisting of such materials as twigs, safety clips and folded graph paper. The potentially mundane associations these works call to mind throw into greater relief the polarity of Utopian and Dystopian landscapes, and the notion that what we regard as personal can have universal connotations.

Danell studied at the Galway-Mayo Institute of Technology, where she obtained a first class honours degree in Fine Arts (2007-2008) where she was awarded Paint Student of the Year. having first achieved her Bachelors Degree in Art & Design with Distinction (2004-2007). As well as featuring in innumerable exhibitions and publications, she has received several awards since completing her university education, including the Arts Council of Ireland Project Award 2011 which is funding her upcoming show here at the Talbot.

We are delighted to have this opportunity to further promote Danell’s work. Her upcoming show is comprised of a new body of work geared toward a personal search for meaning, dealing with contemporary life as coloured by her Scandinavian heritage and upbringing. With her inspiration largely deriving from our physical encounter with the landscape and the merging of the outer environment with the inner being, Danell’s exhibition promises to elaborate the metaphorical act whereby the two are made interchangeable.