Don't Let Me Disappear consists of a single video from which the exhibition takes its name. While the artist has worked in a variety of media, Bradley is best known for his work in film. 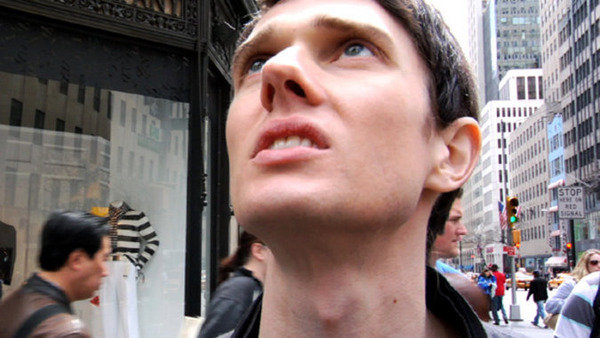 Team is pleased to present an exhibition of new work by New York-based artist Slater Bradley. Entitled Don’t Let Me Disappear, the exhibition will run from January 12th through February 13th, 2012. Team Gallery is located at 83 Grand Street, between Wooster and Greene, on the ground floor. Concurrently, our 47 Wooster Street space will house a one-person exhibition of new work by New York-based sculptor Ross Knight.

Don’t Let Me Disappear consists of a single video from which the exhibition takes its name. While he has worked in a variety of media, Bradley is best known for his work in film. This highly literate work, an update on his previously shown Boulevard of Broken Dreams, follows Bradley’s Doppelgänger, model and actor Benjamin Brock, as he wanders alone through New York City. Brock, who distinctly resembles Bradley, has been a consistent subject of the artist’s work over the past decade. While he acts in part as a stand-in for the artist, he does not neccesarily portray him directly, instead representing a variety of figures, a kind of everyman.

The work strongly alludes to perhaps the best-known wanderer of New York City, The Catcher in the Rye’s Holden Caulfield. Like the Doppelgänger, Salinger’s iconically alienated character walks aimlessly through New York’s streets, critical of and emotionally removed from his surroundings. The Doppelgänger perceives an artificiality as he examines the city; his anguished expression as he absorbs the city recalls Holden’s condemnation of its “phonies.” At the end of Bradley’s film, the Doppelgänger finds and puts on a red hunting hat, identical to the one described in the novel, and in doing so transforms into Holden.

The film depicts the New York City of E.B. White’s famous essay Here is New York. White divides New York into three separate cities: that of the native New Yorker, that of the commuter, and, the most significant of the three, that of the transplant, for whom New York is a final destination. The inhabitant of this third New York, paradoxically, is surrounded by people but perpetually alone. Though he has long resided in New York, Bradley originates from San Francisco, and the film shows his delicate relationship with the City. It is one of intimacy and distance, awe and terror, adoration and distrust.

The Doppelgänger observes and touches the built environment and crowds of the city, all without actually engaging any person or thing. Bradley continually draws attention to the act of walking: the video opens with a shot of legs waiting at a crosswalk, then follows the walking feet of its subject, waiting two and half minutes before showing the rest of his person. Here, Bradley refers to to Walter Benjamin’s conception of the flâneur, Flaubert’s archetypal figure who strolls through the modern city. Benjamin’s flâneur perceptively observes his surroundings but remains wholly uninvolved with them. Department store window displays, like the ones the Doppelgänger desparately examines, are a product of the flâneur’s prevalence in the post-industrial citiy.

Throughout the video, the Doppelgänger’s disembodied voice mumbles brief passages from little-known Russian author Mark Levi’s mysterious 1934 Novel with Cocaine, which chronicles an adolescent male’s descent into hedonism and drug addiction during Russia’s tumultuous years 1916 through 1919. Like the novel, Don’t Let Me Disappear examines the depravity of a young man’s existance during a period of national strife.

This is the 36 year-old’s seventh solo show at Team Gallery. He has been the subject of one-person exhibitions at the Solomon R. Guggenheim Museum and The Whitney Museum of American Art in New York. Institutional solos also include the Aspen Art Museum, the Frans Hals Museum in Haarlem, The Netherlands, the Contemporary Arts Museum in St. Louis, the Berkeley Art Museum in California, and Bard's Center for Curatorial Studies in Annandale-on-Hudson. Bradley's work was included in the 2004 Whitney Biennial. His work has also been included in group shows at such venues as The Museum of Modern Art, New York, the Kunsthalle Fridericianum, Kassel, the Reina Sofia, Madrid, the Kunsthalle Wien, the Schirn Kunsthalle, Frankfurt, the De Appel Foundation, Amsterdam, the Chicago MCA, the Seattle Art Museum, and at the Jeu de Paume and the Palais de Tokyo, both in Paris.