A comprehensive presentation of Natalie Czech's work covering the years 2009 to 2012 is on display. Florian Heinke presents Kein Gott und seine Kinder, a work with enigmatic signs and vanitas-symbols such as snakes, skulls and allegorical angels of death. Wolfson removes familiar pictures and objects of the mass media and pop culture from their context, animating them in a belittle Cartoon. 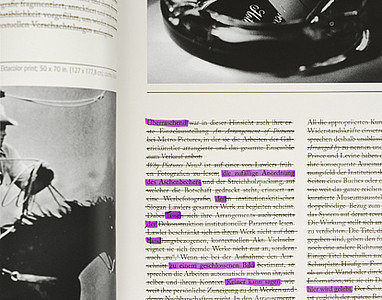 “Me too, I am a painter or Why I am not a painter”—Just like Natalie Czech links the two titles of Guillaume Apollinaire and Frank O’Hara to a contradictory statement, she also links in mutual interaction poetry and art, investigating the permeability of the border between the genres. Making the concealed visible with artistic means, is just a part of her work as is the reflection on the relationship of text and picture. For the first time in the Rhine Main Area a comprehensive presentation of her work covering the years 2009 to 2012 is on display.

HIDDEN POEMS falls back on magazines, daily papers and illustrated books as a material source. Apart from the already existing, two new versions will be on display. With a highlighter the artist marks in articles individual words and syllables, which when read coherently form a poem. All poems, which Czech seeks out in this way, come from the pen of writers and poets, as for instance Robert Creeley, Robert Lax or E.E. Cummings. Once unmasked, they enter a dialogue with the associated press pictures. With A SMALL BOUQUET BY FRANK O’HARA Czech executes a methodical about-face. A calligram, around which different author’s constructed a flow text, word for word, letter for letter, in which it seems to dissolve. Czechs visualizes with colour O’Haras flower poem, which, with perfection and beauty, triumphs over the hardship of the text production. Also in IL PLEUT BY GUILLAUME APOLLINAIRE, the artist falls back to this principle and lets authors of different languages embed their own text into the calligram “Il pleut” by the French poet Guillaume Apollinaire. The exhibition in Wiesbaden gives an outlook on the most recent, still emerging cycle. While using poems of O’Hara and Apollinaire for her own art production, Czech creates a connection to the two poets, who were both active in literature and the visual arts.

TODAY I WROTE NOTHING/DANIIL KHARMS (2009) is a series of 22 photographic tableaux based on a diary entry of the Russian avant-garde writer Daniil Kharms (1905-1942), who was a well known poet and a performance artist in the early Soviet literature scene. 1932 however he was denounced as “an anti-soviet”, arrested and died in a psychiatric ward in 1942. In 1937 Kharms wrote in his diary: “Today I wrote nothing. Doesn’t matter. January 9th”.

Natalie Czech unfolds from the apparent emptiness of the Russian poet a series of lyric possibilities. Each tableau shows a printed book page, marked with Kharms’ diary entry. However some words are missing and the statement and context redefine themselves again and again. “ADIEU IHR SCHÖNEN WORTE” (Adieu, you fair words) quotes a verse from unpublished poems by Ingeborg Bachmann, in which she addresses her writer’s block in such a poetic way that it seems counteracted at the same time. Natalie Czech counters Bachmann’s despair in the creative crisis with a monument, an oversized sheet of paper, made out of all of Bachmann’s novels, poems and writings. Individual syllables are still readable and on the floor in front of it lies, apparently torn from a note book, a page, on which in Bachmann’s handwriting is written “Adieu, you fair words, with your promises. Why have you left me, were you ill at ease?”

Natalie Czech awakes curiosity to examine the depths: from the figurative surface she entices to immerse into the texts, topics and fantasies of the authors. Poetry lies hidden in everyday life and in the everyday life one can find poetry. Extending modern visual conventions from picture to text, she ties in with the past avant-garde tradition, in which art criticism turned to literature and literature to art criticism and thus closes the circle.

“All that is coloured is embedded in the elementary contrast of black and white, because without these two tinting colours there would be no contrasting in the coloured environment. Everything coloured get lost in the black, and dissolves in the white” 1. As with this statement black and white become universal, also the exhibition title expresses unmistakable statements: Florian Heinke. No God and his children. First the painter himself as brand, nothing more and nothing less. Secondly: No God and his children, which is about the people of his generation, who have lost their faith and also the ability to communicate.Consistently Florian Heinke reduces its colour range exclusively to black, which he applies directly on to nettle cloth, in order to use it as a radical medium for his painting, which he calls Black Pop. Pictures from the fast-moving media, like the Internet, magazines and newspapers, his own photos and montages are frozen to incredible monuments, as an arousing comment on the phenomenon of speechlessness. If it was the consumer society, which influenced the Pop-Art artists in the 1960’s, then Florian Heinke reflects interpersonal failure as symbol of the present. His pictures show the angry, whose despair flares up in violent street protests, and the homeless, who have lost all faith in themselves.

The black block in all its explosive power and aggressiveness manifests itself as topos in his serially linked RIOTS, which is how the artist calls his contemporary landscape paintings, and the moment aloofness takes shape in the series HEIMAT as portraits of human icons, who all died lonely. The morbid vibrates in his pictorial language just as well as mystic and the unfathomable: enigmatic signs and vanitas-symbols such as snakes, skulls and allegorical angels of death are recurring elements. In a new, large sized work, black butterflies form a disastrous swarm. The old-Greek word for soul, ψυχή, is the equivalent to butterfly, and here, in the allegedly beautiful, finitude is found. Florian Heinke exalts the extreme, the immoral, the decline and the obsession with the Chiaroscuro of his painting to a symbol for eternal recurrence—Memento mori.

Jordan Wolfson removes familiar pictures and objects of the mass media and pop culture from their context, animating them in a belittle Cartoon. Accompanied by a soundtrack with junky information and directors instructions, the newly assembled world staggers more and more.