The exhibition series Sensor. Time for Young Approaches shows works at short intervals by young artists from collections cooperating with the ZKM. The second part of the exhibition series features works of art by Isabell Heimerdinger and Markus Sixay from the FER Collection in a dialog. 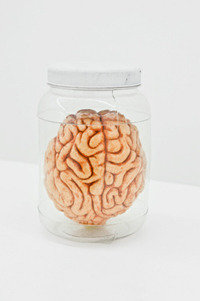 The exhibition series Sensor. Time for Young Approaches shows works at short intervals by young artists from collections cooperating with the ZKM | Museum of Contemporary Art. The second part of the exhibition series features works of art by Isabell Heimerdinger and Markus Sixay from the FER Collection in a dialog.

In her photography and installations, Isabell Heimerdinger (*1963 in Stuttgart) plumbs the borders between authenticity and simulation, fiction and reality, the artificial and the genuine. At the center of her artistic work stand the world of cinema and the medium of film. For some years Heimerdinger has been more intensely occupied with the figure of the actor and the medial staging thereof. Here, she thematizes the dialectic of the pose and "real" expression, of role and identity, emotion and imitation.

In Isabell Heimerdinger’s photographic, filmic, and installative studies, there are often moments of irritation, through which we are – subtly – made aware of our habits of seeing, and we begin to question them. What appears to be real or authentic at first glance proves at closer examination to be a construct, or even a deception. The lamp, for example, in the work "Eclipse" (2001) appears to alight itself; only at a second glance does it become noticeable that the lamp is illuminated by a spotlight. Heimerdinger uses here the technology of film and theater to refer to the optical construction of the projection, which is also the basis of the film and photography media.

The series "Interiors" (1997–2000) shows sets of popular films from the 1950s through the 1980s. The rooms, void of people, evoke the uncanny atmosphere of the film set and thus showcase the staging of the filmic space through the light direction and viewing angle. This allows Heimerdinger to analyze the psychological manipulation through the means of film. With this ambivalence between the fascination for cinema and the exposure of its mechanisms, Isabell Heimerdinger’s works challenge observers to reflect on the medium of film and the ever-present Hollywood culture.

Artist Markus Sixay (*1974 in Langen) explores with his work the possibilities and limits of sculpture through the creation of a frictional and ironic relationship with reality. He borrows from art genres such as concept and context art and leads these approaches ad absurdum through a Dadaist gesture. Irony and verbal-visual play are consistent components of his work. The comprehensive title of a series of video works, "Creating nothing by creating something without creating anything", could also serve as a motto for his oeuvre.

Although his work appeals more directly to our cognitive abilities than our sensory perception, Sixay affords an important role to the material itself by allowing the medium to transport meaning in his art. The abstract structures and concepts from the areas of economy, philosophy, and sociology often become visible in his works and are thus given "good form". The materials are taken, at a first glance, from the everyday, profane world: plastic straws, TV test images, polyurethane foam, plastic foil, bracing wire, etc. Through the subtle forming of these materials and their refined arrangement, Sixay takes on fundamental philosophical questions and sociological ideas in the form of an artistic paradox.

The exhibition Sensor presents works from Markus Sixay created between 2002 and 2005. The apparent "objets trouvés" lay open the structures and processes of reality and thus create a commentary on phenomena of our time. Through their readymade character, the objects display a performative aspect. The conscious and active-productive participation of the observer is required in the creative act of deciphering, quite in the sense of Marcel Duchamp, who thought that the artwork is first completed through the observer. It is, ultimately, up to us to be receptive to the artist’s ideas and to realize the works.

The 8mm small film format looks back to a 80 year-old history, and is thus one of the most important parts of our visual and cultural memory. In order to protect, but also to make it accessible, digitalization appears to be the ideal solution. But unexpected difficulties make their appearances. The 8mm film is considered as the material of the amateur filmmaker and is thus treated in all but a few of the highly professional copy replication plants. The archive must avoid the market, which is a mix of various technologies and qualities. This lecture discusses the special features of the 8mm film in the preparation and execution of its digitalization, and provides an overview of the various “translation possibilities”.