MS Atlantic is centered around rarely shown color photographs of the photographer, who took his pictures on board of the cruise ship MS Atlantic in 1954. They show impressions of a journey of American tourists from New York to a pre-revolution Havana. 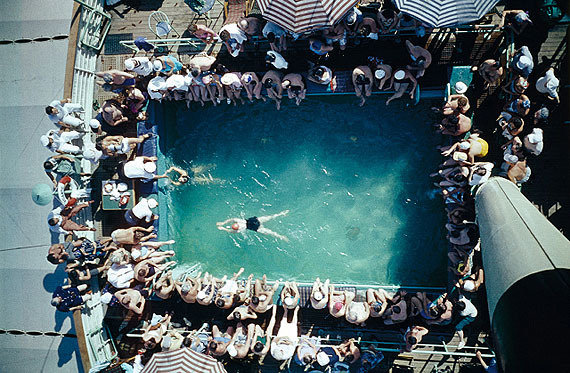 The exhibition is centered around rarely shown color photographs of the photographer, who is more known for his strictly functional industrial and architectural work in post-war Germany. Heidersberger took his pictures on board of the cruise ship MS Atlantic in 1954. They show impressions of a journey of American tourists from New York to a pre-revolution Havana.
In seemingly incidential snapshots Heinrich Heidersberger documented the merry members of the cruise from New York to Cuba. Colorful photographs tell the story of an exotic island in the Carribean and the light-hearted life travelling there.

Heinrich Heidersberger (1906 – 2006) was born in Ingolstadt (Germany) and grew up in Linz (Austria) and Denmark before briefly studying architecture and then attended painting classes given by Fernand Léger in Paris. In 1937 he started as an industrial and architectural photographer. His first major work was an illustrated book about the Heinkel aircraft factory in Oranienburg. After World War II Heidersberger advanced to become one of the leading architectural photographers in Germany. Most notably the architects of the Braunschweig School appreciated his work. In the 1950s Heidersberger also began to experiment with abstract and surrealistic photography. For that purpose he built the rhythmograph after he moved to Wolfsburg in 1961.

However, the acknowledgement of his art began not until the 1980s. The interest of the experts focused mainly on Heidersberger ́s independent works. The knowledge about other parts of his complex oeuvre was left up to his clients and himself. This particular situation caused conflict between independent and applied photography. On one side, artistically working with the medium, subjected to the autonomous dictum of art; on the other side, the strict framework conditions of applied photography. Heinrich Heidersberger overcame these conditions and dared to realize his ideas and revealed new views of seemingly old things. His ability to combine aesthetic principles with aspects of functionality turned him into an outstanding modernist photographer.

The Institut Heidersberger, established in 2002, has been dedicated to the research of Heinrich Heidersbergers ́s lifework. Situated in the artist ́s old studio, it is more than a simple archive. It is a place, in a sense of a studio, where new ideas and concepts for innovative art projects are developed with respect to Heidersberger ́s oeuvre.